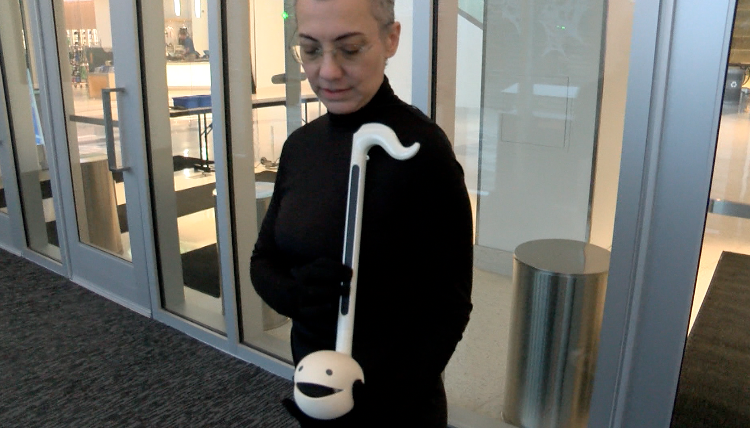 The Milwaukee Bucks held auditions for national anthem performances. Some were very unique.

MILWAUKEE — How many different ways can you perform the Star Spangled Banner? Watch the Bucks national anthem auditions and you'll find out, just like a zebra and its stripes, each rendition is unique.

Over 100 people sang the national anthem in front of a panel of judges at Fiserv Forum hoping to make the cut to perform before a Bucks home game this upcoming season. There are 41 games and each one will have a different performer.

K. Foster might have had the most unique audition of the day.

One of the most unique instruments you will ever see performing the national anthem. pic.twitter.com/O0OQcZRgoh

"He locks me in. He gives me a real straight tone. I can give him a little bit of vibrato," the multi-instrumentalist, K. Foster, said.

She performed with an otamatone. It's a electronic synthesizer, similar to a theremin, first created by a Japanese toy developer in 1998.

"To make him sound good is difficult so you have to have the right interpreter," Foster said.

It's an instrument that has a personality and sound of it's own. Foster said she chose to go with this unique instrument because it offers a fresh take on the classic song.

While Foster chose the otamatone, one man chose to go with his saxophone, another with a guitar and many decided on a more traditional performance like the Janssen sisters who are seven and 10-years-old.

"I would scream into my pillow at the top of my lungs," seven-year-old Hannah Janssen said about being chose as one of the 41 singers.

Those who auditioned will learn if they made the cut soon since the NBA regular season starts in 21 days.