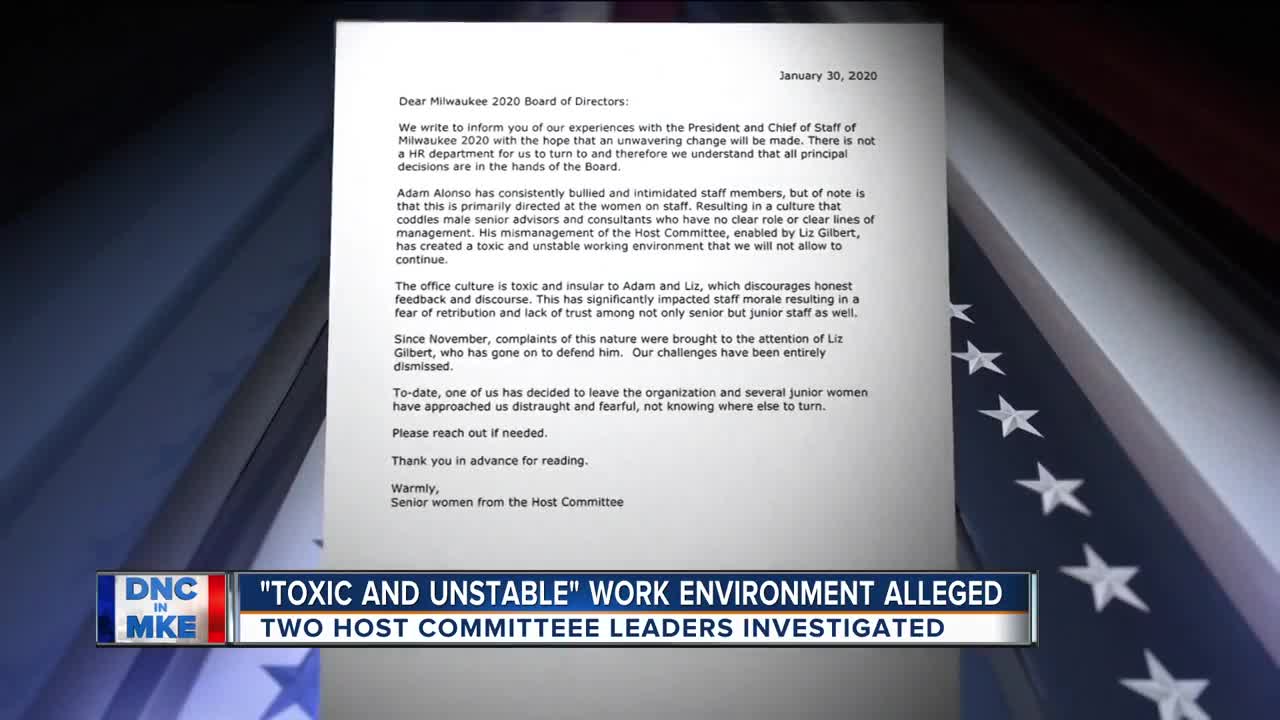 Two leaders of the Democratic National Convention host committee are being investigated after an anonymous letter accused them creating a "toxic and unstable working environment."

MILWAUKEE — Two leaders of the DNC Host committee are on leave after an anonymous letter accused them of creating a toxic workplace.

Mayor Barrett is a co-chair of the host committee. Barrett said his office received the letter on Friday and immediately notified the Milwaukee 2020 Board of Directors.

About 5 months from the Democratic National Convention, two key players in making sure Milwaukee is a good host aren't allowed at their downtown offices while an investigation into allegations of bullying plays out.

"They are investigating it as we speak and I'm sure they will get it right," Barrett said.

In a letter sent to Barrett and obtained by TODAY'S TMJ4, senior women from the host committee claim Chief of Staff "Adam Alonso has consistently bullied and intimidated staff members."

"His mismanagement of the Host Committee, enabled by Liz Gilbert, has created a toxic and unstable working environment that we will not allow to continue," read the letter.

"My position is, regardless of where people work whether it be city hall, corporation or a national convention that there's a safe and healthy work environment," said Barrett.

The host committee is in charge of raising $70 million, finding 15,000 volunteers and thousands of vendors and venues to host a variety of events during the DNC.

State Sen. Chris Larson doesn't think the investigation will ultimately impact the convention, but he knows the host committee has plenty of work ahead of it.

"It's very concerning, but I think they're handling it in the most responsible way which is to say, 'look, we're not going to tolerate the toxic work environment' and out of an abundance of caution, they're making sure to pull those people away, investigate this fully and make sure that everybody's safe and moving forward for a successful DNCC," Larson said.

Mayor Barrett doesn't expect this investigation to take long. Ultimately, the Milwaukee 2020 Board of Directors will decide whether Gilbert and Alonso will keep their current roles.