An Atheist father is fuming over what he called 'Christian symbolism' in his 4th grade son's public school at Roosevelt Elementary in Kenosha.

KENOSHA -- An Atheist father is fuming over what he called 'Christian symbolism' in his 4th grade son's public school at Roosevelt Elementary in Kenosha.

The Kenosha man claims lawyers had to get involved after his complaints went unheard, for months.

Rob Moore says he's encountered Christian symbolism in school before, but he thinks this one in particular has gone too far.

While the district will not comment on camera, opinions on this differ, depending on which parent you ask. 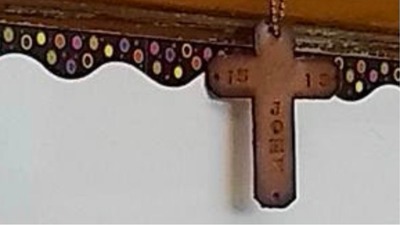 Moore gave us pictures of what was taken down in his son's classroom which include The Sign of The Cross, a poster listing 'Vices' and 'Virtues' and a picture frame with the American Flag that reads 'God Bless America.' Moore became infuriated over it.

He claims for five months, he told the district about how the teacher's decorations made his family uncomfortable, before lawyers became involved.

Moore is an outspoken Atheist, and the president of a chapter with the Freedom From Religion Foundation. He claims as soon as the Foundation's lawyer sent a letter to the district two weeks ago, the teacher took it all down.

"She's a loving teacher and cares about the kids. She's misguided," said Moore.

He questions why it took so long for the district to take action. Other parents we spoke to beg to differ. 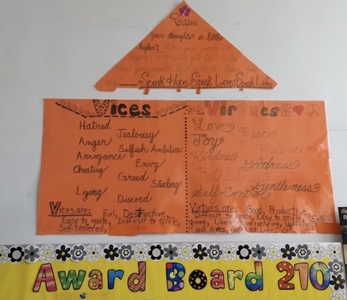 "Kids need to learn that there's going to be different beliefs all through life," said Stephanie Marinelli, Roosevelt Elementary Parent.

Shannon Perez says she's not offended by it at all, adding, "I think it should be in every classroom."

"'In God We Trust,' why is that one offensive?" asked reporter Julia Fello.

Moore replied, "It's not necessarily offensive to me, its illegal."

The Foundation's lawyer cites the U.S. constitution and supreme court rulings on the separation of church and state, referencing that, "Public schools may not... promote religion."

The Kenosha Unified School District replied with this statement:
"The district is aware of the allegations and is working with our legal team to investigate the claims. No further details can be provided due to the pending investigation."
-Tanya Ruder, Chief Communications Officer