President of Airsign, the Blimp owner says Pilot will be okay.

Emergency crews are responding to a blimp crash in Erin Thursday, just east of where the U.S. Open is being held.

TODAY'S TMJ4 has learned that the blimp is sponsored by PenFed Credit Union and owned by a company called AirSign.

Flight For Life was called to the field at State Highway 83 S and the pilot was transported.

AirSign CEO Patrick Walsh told TODAY'S TMJ4 that the pilot appeared to be in fairly good condition, with "maybe second-degree burns to several parts of his body."

Walsh said the pilot was wearing a fire-proof flight suit, and was talking to emergency crews, relating messages to his wife.

A Washington County Sheriff deputy at a security post reported seeing the aircraft on fire, or smoking, and rapidly descending.

Tim and Hunter Guetzke captured the crash on video and began to run to the scene.

"I just decided to run across the field, because you don't know if anyone fell out or anything you could do, It's sad, the way it went down, then the fireballs on the ground," Tim said.

"It was surprising. You think this is cool thing, you don't see this (blimp) then the next thing you know it on fire," Hunter said.

According to a statement for the USGA, the blimp went down around 11:15 a.m.

According to the Washington County Sheriff's Department, the initial investigation revealed the blimp may have experienced mechanical problems prior to the crash.

Both the Federal Aviation Administration and the National Transportation Safety Bureau are assisting with the onsite investigation.

Thursday is the first day of the tournament with the first golfers teeing off early in the morning.

Stay tuned for updates on this developing story. 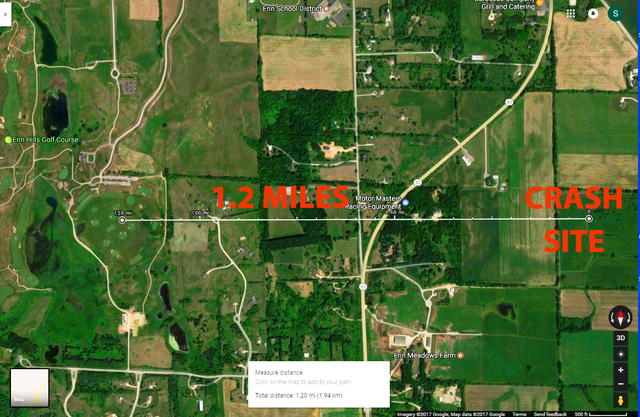