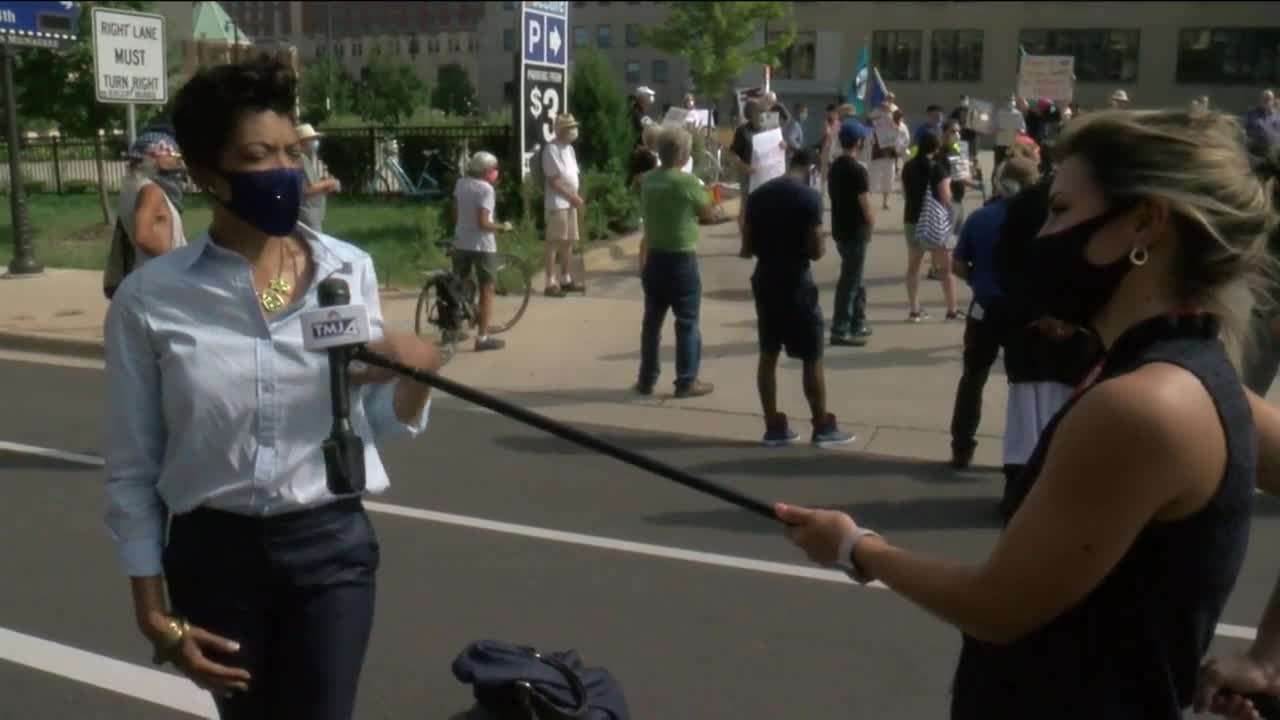 A look ahead to the week of the DNC in Milwaukee on the Eve of it all kicking off Monday.

The Biden campaign hosted an LGBTQ+ Out for Biden event on Sunday. The Democratic National Convention Committee held a unity service with religious leaders of all faiths, as well as a Black Caucus community faith event.

There was still some in-person gatherings outside the Wisconsin Center in downtown Milwaukee, where the DNC is technically anchored.

A couple dozen delegates and other activists gathered for a peace rally where they called for curbing military spending.

First-time delegate Deiadra Queary said this was her chance to meet some of her fellow delegates in person.

A small group of pro-life democrats traveled to Milwaukee and gathered at Ziedler Park to share their message.

"It just made sense for us to come here, anyways, to show that this really matters to us," said Terrisa Bukovinac, the executive director of Pro-Life San Francisco.

In Pleasant Prairie, dozens gathered at a Women for Trump event on Sunday.

Jennifer Lembke went to the event because she said she thinks this election is very important.

A spokesperson for Trump Victory, President Trump's re-election campaign, said it's important the Trump team show up in Wisconsin during the DNC.

"We've seen the Democrats completely abandon Wisconsin once again just like they did in 2016, but we feel it's important to show Wisconsin voters that the President cares about this state and cares about the voters here," said Trump Victory spokesperson Chris Walker.

Walker said they are making sure people feel safe when they come to campaign events.

"We take a lot of precaution on that, we make sure we have masks available, we appropriately socially distance, a lot of these things are taking place outside," Walker said.

The President will host an in-person event in Oshkosh on Monday afternoon, and Vice President Mike Pence will visit Darien, Wisconsin, later in the week.

In response to these planned events, the Democratic Party of Wisconsin called it a "dangerous decision" to campaign in person, writing, "Trump’s visit to the state comes as the Wisconsin Department of Health Services reported that over 1,000 Wisconsinites have died from COVID-19."

Democratic National Committee spokesperson David Bergstein wrote, "If Trump wants to understand what's happening in Wisconsin and how badly working families are suffering under his administration, he should watch our Convention -- not fly in and out of an airport hanger. If he watches, he'll see Wisconsinites, and Americans across the country, speaking about how they're fed up with his incompetence, his total failure to deal with the coronavirus, and why they're excited for Vice President Biden's leadership in the White House."