Adventure Rock MKE opens its doors on east side 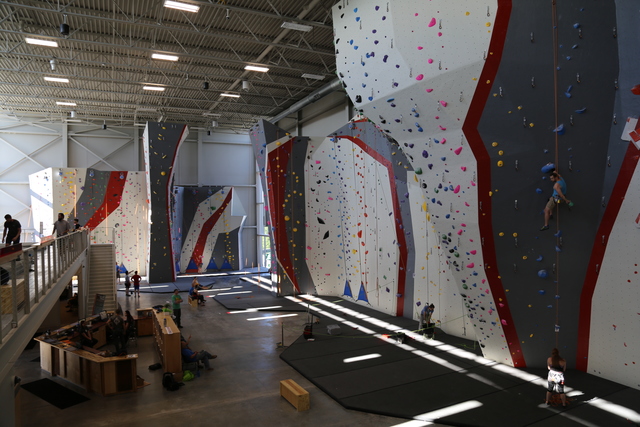 For climbing enthusiasts, the wait and commute is now over as the second Adventure Rock Indoor Rock Climbing gym is officially opening its doors Saturday on Milwaukee’s east side.

Located on the corner of North Avenue and Commerce Street, “Adventure Rock MKE” has been under construction for about two and a half years now. However, climbers like Ryan Wickens say it was worth the wait.
“The east side has been crying out for a gym of this quality for a few years now and I’m pleased it’s here,” said Wickens. “It’s definitely the best facility I have seen in the state of Wisconsin.”

18 years ago, Adventure Rock opened its first location in Brookfield. General Manager Craig Burzynski says the Brookfield location has significantly grown since its opening, and it was time to expand.
He says the second location “just seemed like the perfect spot.”
Adventure Rock MKE opened for members earlier this week and celebrates its official grand opening at 9 a.m. Saturday. The new development also consists of apartments, managed by the Mandel Group.
The new gym is about 50 percent bigger than the Brookfield gym, and its climbing walls are about ten feet taller. It was also designed to have floor to ceiling windows to have more natural lighting and for climbers to get a view of the city’s east side.
Buryznski says many climbers at this Brookfield location live in Milwaukee and are ecstatic about the closer location to avoid the lengthy commute through construction to Brookfield. David Drager is one of those climbers.
“It’s close to my apartment now, so I can come anytime and not have to trek through the traffic to Brookfield,” said Drager.
Drager is looking forward to the new and expanding climbing community the east side location will bring. He also says the new higher climbing walls will be great for training for outside climbing.
Buryznski says indoor climbing is open to people of all ability, experience, and ages. Both gyms offer instruction, camps, and outings for groups and parties. For more information, visit Adventure Rock's website.
Copyright 2015 Scripps Media, Inc. All rights reserved. This material may not be published, broadcast, rewritten, or redistributed.