Fifty-two kids ages five and under including 10 babies were registered to hunt in Wisconsin in Fall of 2017.

The I-Team went to find out who these children are, and if they're really firing guns.

There's really no way even for the Department of Natural Resources to know if those children participated in a hunt unless they register a kill. The youngest person to do so was a four-year-old.

With the new law eliminating an age limit to get a license, it's up to parents. Some think those parents are taking home extra game. But, for Morgan Jones, it's a bonding moment between father and son.

"They don't have any gaming systems at dad's house, they have BB guns and bows and camo," Jones said. 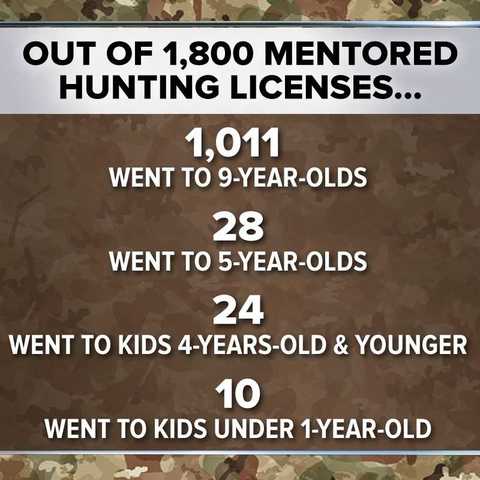 This fall, his six-year-old Gauge shot his first deer. He could do that because Wisconsin changed its hunting laws.

"Anyone of any age can purchase a mentored hunting license," Todd Schaller from the Wisconsin Department of Natural Resources said on a Facebook video from the DNR.

Ultimately it's up to the parents to decide.

"They could purchase it at 9 or 8 or younger," Schaller said.

Frederick Prehn is on the Wisconsin Natural Resources Board.

"I think the spirit of the law, my interpretation, is that it's the parents' responsibility," Prehn said.

Jones takes the responsibility seriously and knew Gauge was ready.

"He wasn't just out for the kill shot, he knew that it was putting food on the table for his family," Jones said.

Even though his four-year-old could have gotten a license, he didn't.

"Maybe at four years old some of them are ready to make that decision," he said. "But I didn't feel that my four-year-old was ready to do it by himself yet."

Prehn understands why some people would buy a license even if a child isn't going into the woods.

"Somebody would buy it just for nostalgic reasons," he said. "Obviously a toddler or an infant doesn't have the mental capacity to understand what's happening."

But he does have concerns people could be abusing the law.

"I think is to acquire another license for the taking of big game and that's the one that I think needs to be evaluated and questioned a little bit," Prehn said.

He explains a mentor can't use a mentee's tag, but someone else in a hunting group can.

"If people are buying those licenses and somebody else taking that animal that's not really, I don't think, fair," he said.

Jones agrees but is glad the change allowed him to bring his son into the tradition.

"Kind of reliving my childhood, you know, coming up hunting, it means a lot," he said.

On April 19 the DNR will host public hearings in every county. Prehn hopes people will come out to share their opinions on regulating group hunting.

The DNR doesn't have control over the law getting rid of the minimum hunting age. Legislators are responsible for that.