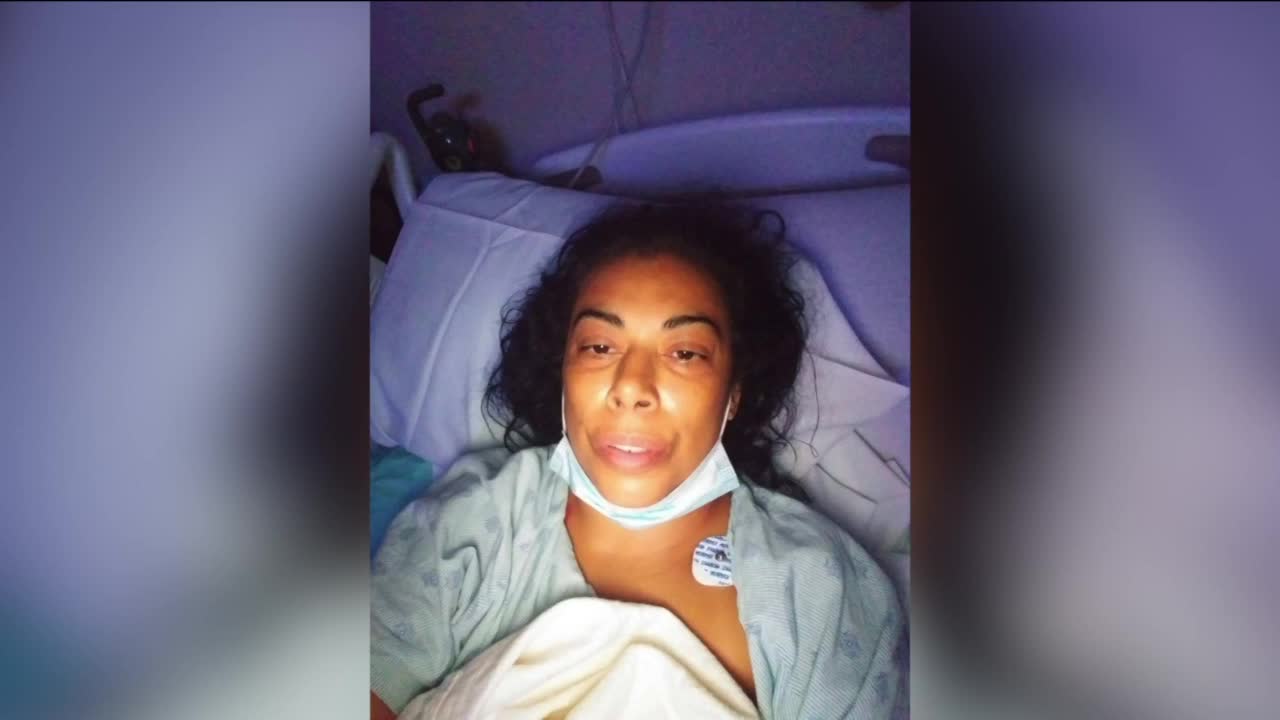 A Milwaukee COVID-19 survivor thought the virus came back. Instead, doctors made a potentially life-saving discovery.

MILWAUKEE — A Milwaukee woman who contracted the COVID-19 virus thought it came back last month but instead received a potentially life-saving diagnosis.

Melissa Armour tested positive back in March for the coronavirus. Her symptoms were severe, and she was even hospitalized.

"You have double pneumonia, you have the dry cough, you have a fever of 104 [degrees]," said Armour.

She battled for weeks, but it seemed she had recovered. That was until her symptoms returned in August.

"I would be coughing out my lungs," Armour said. "I couldn't even talk."

At first glance, it appeared the virus had returned stronger than before.

"They did X-rays, CT scans," she said. "They found that my left lung partially collapsed and I had pneumonia again."

But when her tests came back, she received an unexpected diagnosis.

It wasn't COVID, it was cancer.

"I just couldn't believe it," she said. "And the doctors and the nurses were like well you might not like to hear this but the coronavirus actually saved your life because we caught leukemia on time."

Armour was cared for by Dr. Zartash Gul, a hematologist oncologist at Aurora St. Luke’s Medical Center, and Dr. Federico Sanchez, the medical director for Aurora Cancer Care. They said because they caught her leukemia early enough, they were able to start her on a mild treatment.

If they caught it later, they might have had to administer a more aggressive plan.

"I think it benefited her in the sense that, because of her concern for COVID she showed up and she was diagnosed may be slightly earlier than she could have," Gul said.

"Everything looks like COVID and COVID looks like everything else," Sanchez said. "So, it's very difficult to determine what you have in this time with a pandemic. Everybody has COIVD until proven otherwise."

Armour is one of the lucky ones during this pandemic.

A study done by the Journal of American Medical Association looked at new diagnoses of six common cancers during the pandemic, and found diagnoses are down 46 percent. Leukemia was not one of the cancers included in the six.

The Journal of Clinical Oncology looked at two common cancer screenings and found those are significantly down as well. Mammograms are down 89 percent, and colorectal screenings down 84 percent.

At Aurora St. Luke's Sanchez estimates their screenings are down by about 40 percent, adding that could have serious effects down the road.

"Our concern has been that we've been bracing ourselves and we started to see the effects," Sanchez said. "That we're going to be seeing a lot more advanced cancers in the next coming year, just because we miss the opportunity to find them early."

Gul points out that Armour likely would have come in for treatment at some point for her leukemia.

"Leukemia is a fast-growing disease that [doesn't] have a screening program for the patients are sick when they come," Gul said.

But more and more people are putting off routine cancer screenings, potentially for fear of contracting the virus at the doctor's office or hospital.

"I would hate for people to miss an operable lung cancer or operable breast cancer or colon cancer that could be cured, I'm literally saying cured," Sanchez said.

They want people to treat their health as essential.

"I would say that coming to the hospital is probably safer than going into a restaurant at this time," Sanchez said.

Despite the potentially life-saving diagnosis, Armour wants people to take the virus seriously and wear a mask.

You can check out more of her message below: