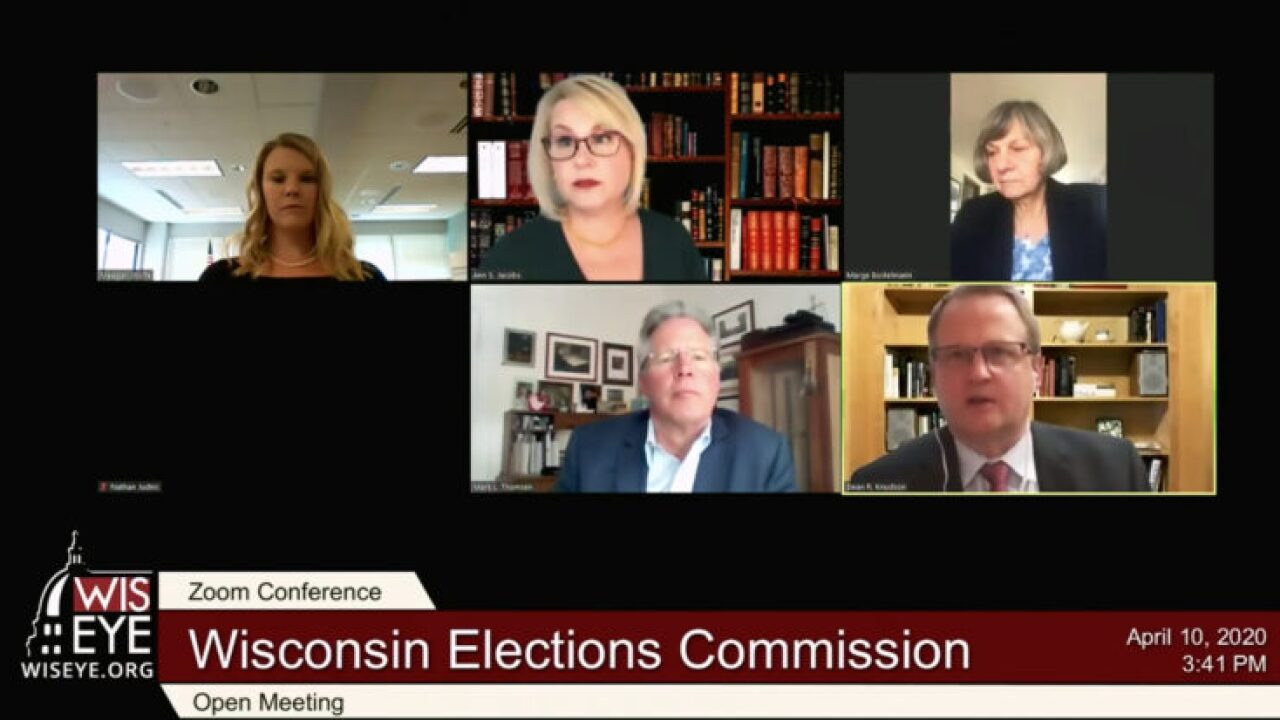 This article is co-published by ProPublica, a nonprofit newsroom that investigates abuses of power.

As ballots began pouring in by mail after Wisconsin’s April 7 primary, local election officials became increasingly perplexed over which ones to count.

A federal judge had ordered that ballots arriving as many as six days after the election should be accepted, but the U.S. Supreme Court narrowed that, ruling that ballots should be counted only if they were postmarked by Election Day.

The trouble was that many ballots were arriving without postmarks, or the marks were unreadable. Desperate for guidance, the 1,850 municipal clerks who run Wisconsin’s elections turned to the state agency tasked with helping them: the Wisconsin Elections Commission. The commission’s three Democrats and three Republicans wrangled over the issue, with Democrats wanting all ballots received in the mail by April 8 — postmarked or not — to be accepted and Republicans pushing to reject all ballots with missing or illegible postmarks.

Dean Knudson, a former Republican lawmaker who was chairman at the time, retorted, “Can you envision supporting any motion that would exclude any ballot?”

In the end, the commission deadlocked 3-3, leaving Wisconsin’s municipal clerks to decide on their own what to do — a standoff that has become more common this election year, according to an investigation by Wisconsin Watch and ProPublica.

The commission has reached consensus on a handful of important issues, such as the mailing of ballot applications to voters, but it increasingly stalemates along party lines. Commission members have strayed far from the apolitical approach of the panel’s predecessor board, considered a national model for effective election administration.

The commission’s format is “a recipe for gridlock,” said Jay Heck, the executive director of Common Cause in Wisconsin. “We’ve returned to where we were in the late 1990s, with partisan control of the body that oversees Wisconsin elections. … And so what that means is that if you have a 3-3 tie on any matter that’s under consideration, nothing happens. Nothing moves ahead.”

The commission has deadlocked at least 19 times in the 28 meetings it has held since the start of 2020, but only five times in the prior four years, according to meeting minutes, video recordings and live streamed coverage. (No data was available for five meetings this year and one last year.)

Most of the tied votes in the commission’s history have occurred since Robert Spindell Jr., a Republican donor who promotes unfounded allegations of vote-by-mail fraud, joined in late 2019.

The latest deadlock was Oct. 20 over how to handle a complaint about the Milwaukee Election Commission’s tardy notification of a massive reduction in polling locations before the April 7 primary. When Spindell began to discuss the complaint, Jacobs interrupted, saying it didn’t come under their purview. “Are you trying to muzzle me?” Spindell shouted at her over Zoom.

The inaction has shifted responsibility to courts and municipalities, at times sowing confusion and inconsistency. The commission gridlocked over whether the Green Party presidential ticket should be allowed on the ballot and whether to follow a judge’s order to purge a quarter-million Wisconsin voters from the rolls; both issues ended up in court.

During an Aug. 5 hearing on four cases related to rules changes for the Nov. 3 election, U.S. District Judge William Conley expressed astonishment that the commission had been “frozen by gridlock over such simple issues.”Because of the commission’s deadlock over disputed ballots, the village of Cambridge counted those it received without postmarks after primary day, but the city of Janesville didn’t. There were even disparities within families.

Christopher Koschnitzke’s vote-by-mail ballot was among the 5,640 spurned statewide for arriving too late, although his wife’s — mailed at the same time — was not. The postmark on the absentee ballot envelope sent to the town of Lake Mills was deemed not “readable.”

“It makes you wonder: How valid is the process and how many more people are in the same position that I’m in?” said Koschnitzke, 40, a Lutheran pastor.

It didn’t have to be this way. The commission replaced Wisconsin’s Government Accountability Board, made up of six retired judges who rarely deadlocked during its eight-year history.

The GAB was formed in 2008 in the wake of the legislative caucus scandal involving lawmakers who illegally used state-paid aides to run private political campaigns. The GAB was composed of retired judges specifically to avoid partisanship.The GAB had the power to conduct independent investigations that did not require legislative approval.

“Wisconsin’s GAB is unique among state election authorities in the United States,” wrote Daniel P. Tokaji, now dean of the University of Wisconsin Law School, in a 2013 UC-Irvine Law Review article. “It is a genuinely nonpartisan institution, in an era of fierce and acrimonious partisan competition.”

The board was abolished in 2015, by Republican lawmakers furious over its role in investigating former Gov. Scott Walker’s 2012 campaign after he was recalled.

Now, most of the power is held by the Legislature, where Republicans have nearly insurmountable control thanks to gerrymandering. The top four legislative leaders appoint four of the six members, with Republicans and Democrats equally represented. Wisconsin’s governor, Democrat Tony Evers, appoints just two members to the commission — former clerks, one from each major party — recommended by those legislative leaders.

The GOP-run state Senate must confirm all appointments, including commissioners’ choice for agency administrator. Campaign-related investigations are now handled by a separate Ethics Commission.

Both Republican and Democratic appointees of the commission interviewed by Wisconsin Watch say they have consulted with the legislative leaders who appointed them before voting on key issues.

Spindell said he plots strategy with Scott Fitzgerald, the Senate majority leader, and Andrew Hitt, chairman of the Republican Party of Wisconsin, including on a proposal to send request forms for absentee ballots to 2.6 million registered voters. Hitt said he let Spindell know that he supported the idea, but, “Anybody who thinks Bob Spindell takes ‘marching orders’ hasn’t met Bob.”

Spindell said he considers it his job to “protect the interests of the Republican Party” while providing political balance.

“Before I got on the commission, both the GAB and the Wisconsin Elections Commission were thought of terribly by the Republican Party,” said Spindell, senior vice president for the Milwaukee office of a national merger and acquisitions firm. “I think I’ve changed that.”

Democratic commissioner Jacobs also does not shy away from the partisan nature of her appointment, adding that it allows the public to know “where people stand on certain issues.”

Spindell previously served on the Milwaukee Election Commission and as a Republican National Convention delegate in 2016. Like Trump, Spindell spreads misinformation about widespread absentee vote fraud including in political ads as chairman of a dark-money political group, Wisconsin Patriotic Veterans. He said he is speaking in the ads for himself, not as an elections commissioner.

Soon after Spindell joined the state commission, members clashed over an October 2019 letter to 232,000 Wisconsinites who were believed to have moved, asking for them to confirm their current address or update their voter registration. Those who did not respond would be removed from the rolls in 2021, the commission decided; an earlier effort had deactivated thousands of voters who had not moved.

The conservative Wisconsin Institute for Law & Liberty sued the commission, arguing state law required it to act within 30 days to remove those voters. An Ozaukee County judge agreed, and the commission split, with Republicans voting to comply and Democrats refusing to do so. Malloy’s order was overturned on appeal after the judges ruled the law applies to municipalities — not the state elections agency. The case is now before the Wisconsin Supreme Court.

Rebuffing Kanye and the Green Party

On Aug. 20, all eyes were on Wisconsin again as an attorney for Kanye West tried to argue the erratic rapper’s way onto the presidential ballot. West’s candidacy was widely seen as a Republican effort to take votes away from Democratic candidate Joe Biden; Trump won Wisconsin in 2016 by less than 1 percentage point.

The commission ultimately deemed West ineligible because his attorney missed the deadline by about one minute to submit nomination papers. The vote was 5-1, with Spindell declining to cross the partisan canyon.

In August, the commissioners split 3-3 along party lines over whether to allow the Green Party — another perceived source of votes to be siphoned away from Biden — on the ballot. Spindell apologized to a party official for the decision and later recommended a lawyer to sue the commission. That lawsuit made its way to the state Supreme Court, which declined to take it up, saying it came too late in the election season.

Knudson, the legislative architect of the Elections Commission, said in a June video interview with the Western Wisconsin Journal that his initial fears about the commission’s 3-3 setup were assuaged after his appointment to the body in 2017.

“Frankly, it really works pretty well,” he said, adding that most of the time, the commission reaches a consensus. Knudson did not respond to Wisconsin Watch’s request for an interview.

Marge Bostelmann, a Republican commissioner, insisted that all members, regardless of party, share a common goal: “A safe and fair and honest election.”

Jacobs said she has seen the commission evolve from a “rather uninteresting organization into a sort of critical one” as it grapples with election security and pending litigation that could change Wisconsin election rules before Nov. 3.

Thomsen said he believes the commission has functioned reasonably well, thanks to the dedication of the nonpartisan commission staff and local clerks, whom he described as “friends and neighbors who do all the work at the polls and counting the ballots.”

“Wisconsin is known historically for running fair elections,” he said. “And there’s nothing that has changed since 2016 in that.”

For Koschnitzke, the pastor, the lack of guidance from the Wisconsin Elections Commission — and the Postal Service’s unreadable postmark — allowed his vote to go uncounted. “Any idea or thought I had of voting absentee (on Nov. 3), ” he said, “has gone out the window.”

Wisconsin Watch’s Dee J. Hall, Clara Neupert and Anna Hansen contributed to this report, which was funded by ProPublica’s Electionland project. The nonprofit Wisconsin Watch (wisconsinwatch.org) collaborates with WPR, PBS Wisconsin, other news media and the UW-Madison School of Journalism and Mass Communication. All works created, published, posted or disseminated by Wisconsin Watch do not necessarily reflect the views or opinions of UW-Madison or any of its affiliates.