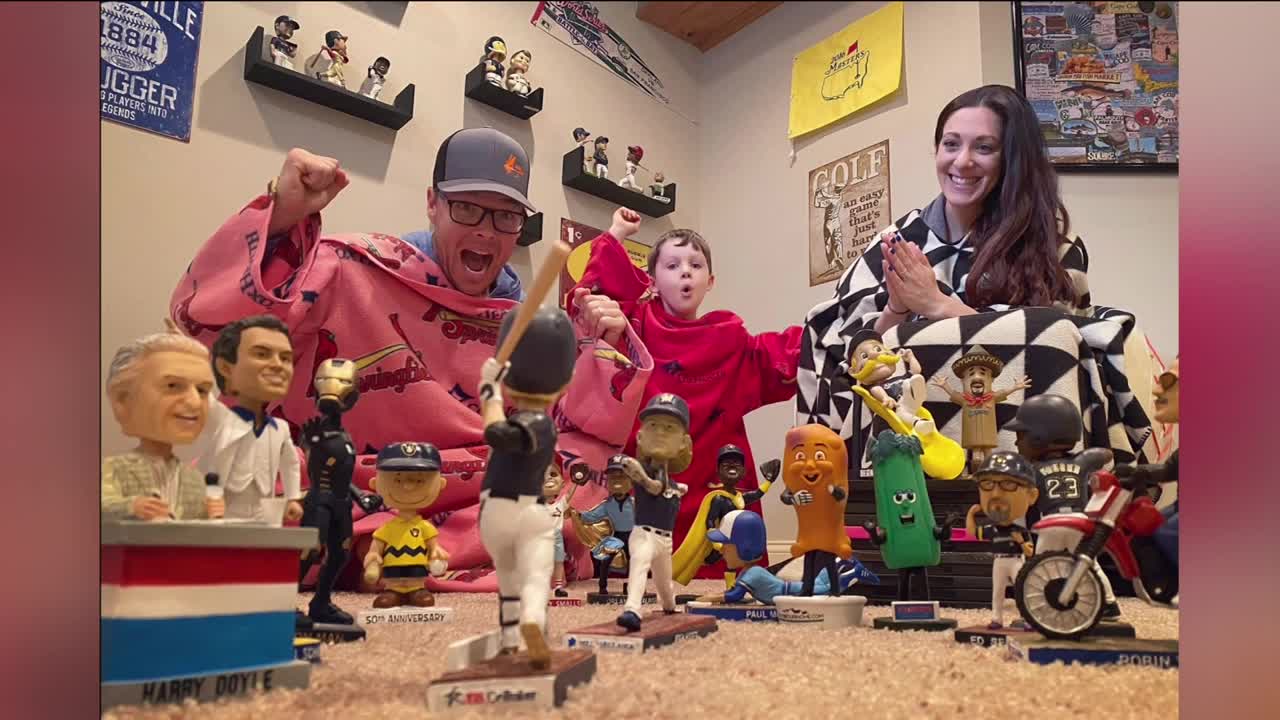 Many baseball fans are missing the sport, and especially the Brewers. They would have been playing the arch-rival Cardinals this week. But radio play-by-play announcer Jeff Levering has a fun way of keeping fans involved.

Many baseball fans are missing the sport, and especially the Brewers. They would have been playing the arch-rival Cardinals this week. But radio play-by-play announcer Jeff Levering has a fun way of keeping fans involved.

"There aren't a lot of smiles that are going around out there in this country and out in the world. So we're just trying to bring smiles to people's faces," Jeff Levering says.

"My family, I mean this is the most they've seen me in...who knows how long. So we're all just trying to find something fun," Levering says. "Right when we moved into our house, we actually painted those and put them up for our young son. We moved into the house and they kind of stuck and it's our decor for our day. This was my daughter's second birthday, so we put up things that she can do, and she's now mastered most of those things."

Instead, he's trying to lighten the mood of Brew Crew fans. With some Levering levity and laughs on Twitter.

"I think you might have it...yes, yes. We were going to try to do some homemaker tips yesterday, but my caulking skills didn't turn out. And you can watch live feeds of these zoo things so we just decided why don't we go fishing at the bottom of the ocean and see what we can catch. And I waddled like a penguin, and my wife and I were looking for tigers, and she got me with a dinosaur," Levering says. "We got a lot of toys and a lot of different things. Like cat boy might make an appearance at some point. Who knows?"

It's also filled with gems from the past.

"That tuxedo. We went back; it's over 20 years old. So that in itself is a little scary. Shameless plug, it's a little big on me. I'm not going to lie. I wore that for every prom, my junior year, senior year. The dates that I had for those specific dances. They reached out, and they said, hey, I remember that suit. It looks the same. Just add some glasses and less hair. And we're ok," Levering says.

From tuxes to zubaz, Jeff has it covered.

"I got 'em on. Here they are. The old school zubaz. So that's not just a one-trick pony. That's just part of my normal wardrobe Lance," Levering says.

And of course, Mister Baseball is never far away from Jeff's side.

"Bob's never far from me. He's always here. I know, and this is what all of our faces are going to be like in a couple of months I think if we don't get baseball back. So let's go baseball, figure it out. He's chomping at the bit; he's kind of tired of Arizona. He wants to get back to Milwaukee and get to Miller Park and call some Brewers baseball and going swimming in the clubhouse," Levering says.

All in the message. We're okay. And Brewers baseball will be back.

"We're not going anywhere, and if you need me to do something? I'm happy to lend some voice and some zubaz," Levering says with a laugh.