Conservatives at RNC wear their hatred of Clinton 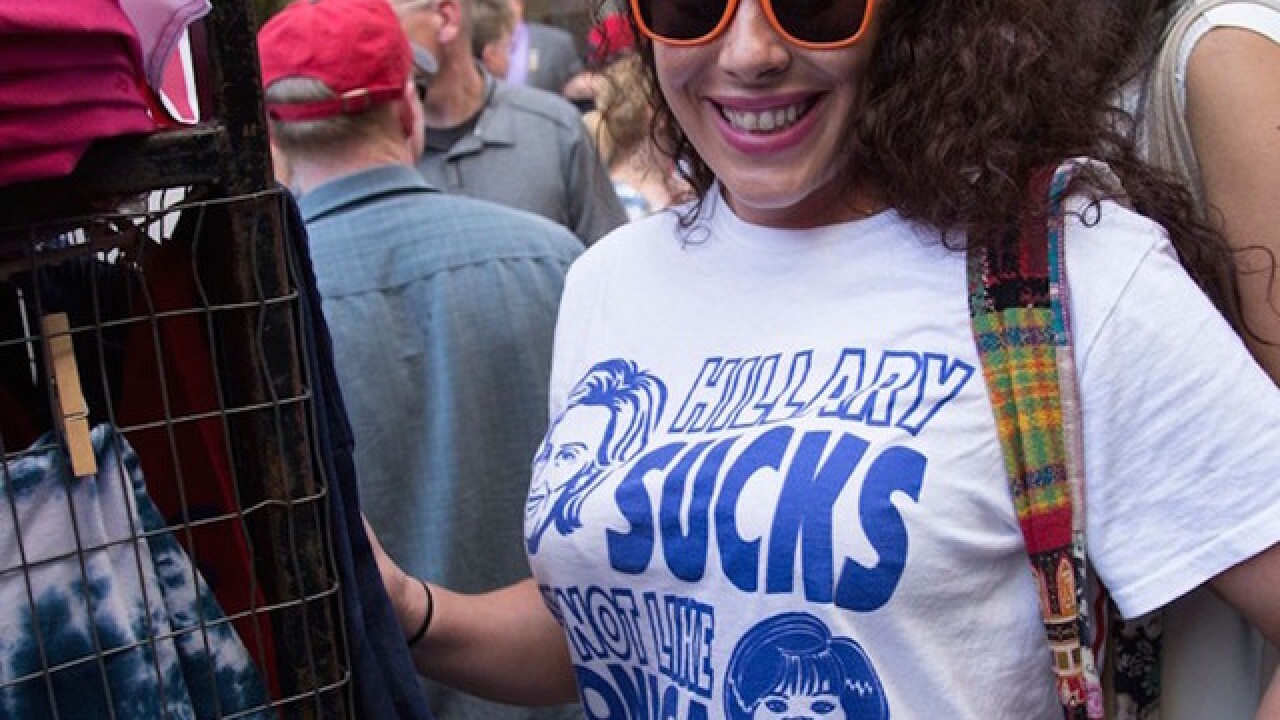 CLEVELAND — The Republican Party is still working to close the split created by a long, sometimes-nasty, divisive primary season, but conservatives in Cleveland this week for the Republican National Convention already are united around one thing: their hatred of Hillary Clinton.

Many delegates and non-delegates in town for the convention wore those feelings right on their T-shirts and pins with sayings ranging from career critiques to insults to Clinton’s physique.

Standing outside the Quicken Loans Arena, site of the RNC, Bob Kunst, a former volunteer for the Clinton campaign in 2008 who wore a Hillary Clinton mask, said Clinton is a tramp because she’s worked with Obama and sided with him on the Iran Nuclear deal.

“Now that she’s in bed with Obama she says let’s divide Jerusalem and give it to the Arabs who want to kill all Jews. … She’s a traitor for not sticking to where she was at. Giving Iran nukes was completely unconscionable.”

John Sullivan, 52, of Texas, sported one of the various pins available for purchase at vendors around downtown.

“Mostly it’s an attempt at humor,” he said “Philosophically I don’t appreciate her politics. If you look at socialism around the world, it’s been abject failure anywhere you go.”

Sullivan’s wife is a delegate, and his first choice was Ted Cruz. He said he’ll vote for Donald Trump because “considering the alternative, would be kind of a horrific choice.”

Jerry Luke, 63, is originally from Arkansas and he’s been weary of the Clinton’s all of his life. He says he has heard many a story of the family using their power and influence to cover up crimes.

“The reason I think she should go to prison is because all of the evil I have seen done and I know that she was harassing people. … Every time [Bill Clinton] gets into trouble she’s always around to block it,” he said.

What’s the crime that should send Clinton to jail? Luke said “flip-flopping.”

“If you listen to all of the times that she’s talking even as she ran as senator. Listen to her speeches now, it’s all changed. She flips every time she needs to say something to get her way.”

Chase Bolinger, a 25-year-old from Illinois, said he’ll never forgive Clinton for her role in the Benghazi attacks.

Safadi said she’s more anti-Hillary than pro-Trump but is excited for his presidency. When asked whether some might find her shirt offensive she responded, “Hillary Clinton is for late term abortions, and I’m very much against that, so it’s my right and it’s my opinion, and I don’t support her. I would love to support a female candidate, but she’s just not the one for our country.”