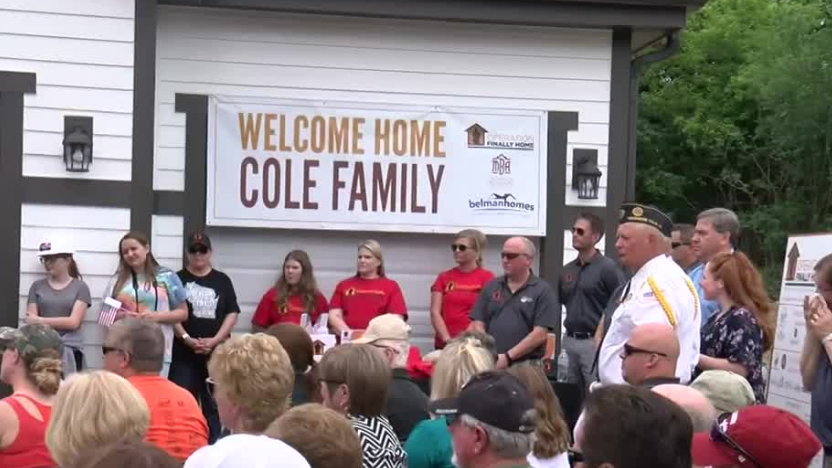 MENOMONEE FALLS -- A veteran and his family got the keys to a new home specially built for them Saturday morning.

It's a part of a nonprofit's goal of honoring those who sacrifice their lives for our country.

Stepping into their new house in Menomonee Falls, the Cole family was filled with wonder and amazement.

The gift of a home is something U.S. Army Sergeant Tyson Cole never could have imagined.

"I feel like I'm going to wake up any moment and this is all just a dream," Cole said.

In 2007 he suffered a traumatic brain injury in Baghdad and was forced to retire. Now he's still struggling to heal and faces debilitating migraines.

"Every day is a challenge and you kind of have to learn this new person. It's like being introduced to yourself all over again," he said.

Cole decided to apply to get a new house through the national nonprofit Operation Finally Home, an organization that works to provide mortgage-free homes for veterans.

Now months after breaking ground, it's ready to move in.

He hopes it will reduce the stress in his life, and allow him to focus on his health.

"I don't feel like I've done enough to deserve this," Cole said. "You have, you're the reason we get to sleep at night," Molly Halliday of Operation Finally Home told him.

Inspiring messages fill the walls, and there's even a panic room to help with his migraines.

"Just to have a place to go where it's quiet and dark to kind of wade those out it's a blessing," Cole said.

With the keys in hand, he's ready to start a new life with his wife and three kids.

"From this day forward when I'm faced with that adversity I don't have to think about the time that held me down, but the community that held me up," Cole said.

The house was built and put together thanks to more than 60 companies that provided donations and volunteered their time.

It marks the fifth house Belman Homes has built for Operation Finally Home in the state.