Who's that girl? Rickie Fowler flaunts significant other at Erin Hills

Image copyright 2017 Getty Images. All rights reserved. This material may not be published, broadcast, rewritten, or redistributed.
Andrew Redington
<p>HARTFORD, WI - JUNE 14: Rickie Fowler of the United States walks along the course with Allison Stokke during a practice round prior to the 2017 U.S. Open at Erin Hills on June 14, 2017 in Hartford, Wisconsin. (Photo by Andrew Redington/Getty Images)</p>

Erin, Wis. -- Ricki Fowler wowed the crowds with his stellar play in the opening round of the U.S. Open Thursday, but his new girlfriend is also turning heads.

Fowler has been dating Allison Stokke, a 28-year-old fitness model and pole vaulter, and the two have been photographed walking hand-in-hand on the greens of Erin Hills this week.

Stokke, a former student-athlete at the University of California, Berkeley, gained internet fame about a decade ago when one of her photos (pictured, below) went viral.

Fowler appears to be embracing his new "taken" status, especially considering he used to make fun of singlehood. At the 2016 Ryder Cup, he posted a photo of his lonely self standing among his teammates kissing their significant others.

The TV cameras have also been all over the couple during early U.S. Open coverage.
 So is Fowler's new status good for his game or a distraction?

It certainly seems that a little love in your life can be good for your game. Fowler shot a 65 and led all golfers after the first 18 holes at 7 under par.

Leading the tournament and getting the girl? Looks to us like he's doing just fine. 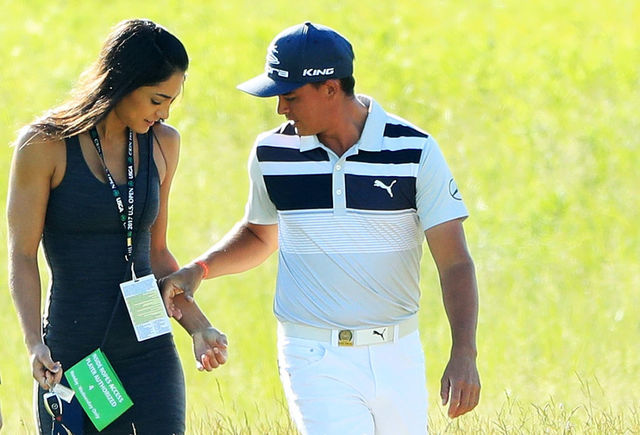