Top 5 most impactful NFL injuries of 2017

Where does Aaron Rodgers stand? 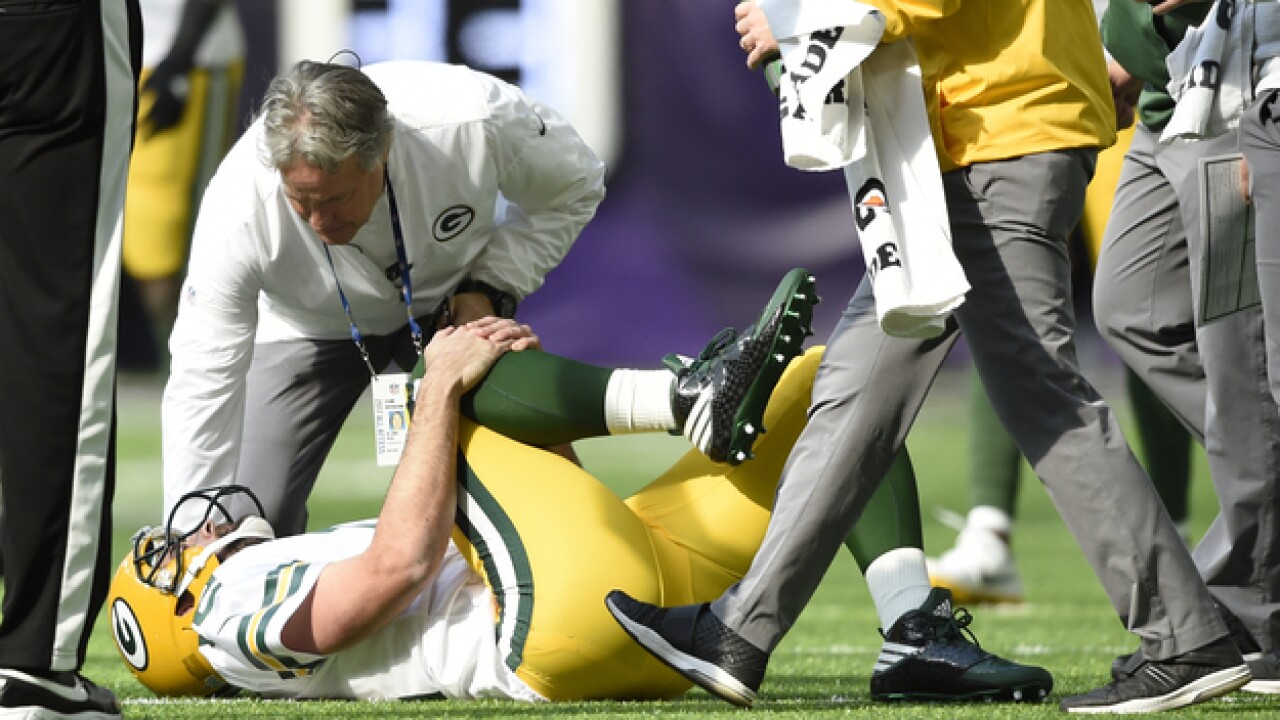 Copyright Getty Images
Hannah Foslien
<p>MINNEAPOLIS, MN - OCTOBER 15: Aaron Rodgers #12 of the Green Bay Packers clenches his right knee after being hit during the first quarter of the game against the Minnesota Vikings on October 15, 2017 at US Bank Stadium in Minneapolis, Minnesota. (Photo by Hannah Foslien/Getty Images)</p>

In just four games as the lead back in Minnesota, the Florida Stat rookie carried the ball 74 times for 354 yards and a two touchdowns.

After he tore his ACL in week four against the Lions, the Vikings handed the backfield over to a combination of Latavius Murray and Jerrick McKinnon, and the pair was impressive. They led Minnesota to the league's 7th best rushing attack in terms of yards and touchdowns.

However, they averaged 3.9 yards per carry, the 9th worst total in the league.

Cook averaged 4.8 yards per carry in his short stint, which would've been tied for 6th best in the league if he kept it up all season.

Perhaps, if Cook were still healthy, the Vikings would be an even bigger favorite to win the NFC and advance to the Super Bowl.

JJ Watt needed to be assisted off the field after suffering an apparent leg injury.#SNF pic.twitter.com/zZ5B8yzakU

For the second year in a row, the two-time defensive player of the year lost a majority of his season due to injury, and nowadays, the Texans are most used to life without Watt than with Watt.

However, Watt's impact can't be understated.

Granted, both Vince Wilfork, Quinten Demps have departd since then, and they lost linebackers Whiteny Mercilus and Brian Cushing for a significant time this season, but a healthy Watt is dominant and destructive force in teh NFL.

Despite a banged up defense, the Texans were rejuvenated behind the strong, accurate arm of their star rookie quarterback, Deshaun Watson. In just six starts, Watson threw for 1700 yards, 19 touchdowns, and only 8 interceptions while maintaining a 103 QB rating.

Though Watson only led his team to a 3-3 record, all three of his loses were to teams with winnings records.

The Packers started off the 2017 season 4-1, only dropping a week two road game to the defending NFC champion Atlanta Falcons 24-23.

Everything changed in week 6 when Rodgers collarbone broke after an Anthony Barr hit.

The Packers finished their season 3-8, and only passed for over 250 yards once. Over his career, Rodgers averages 258 yards per game.

With or without Rodgers, the Packers defense wasn't much to write home about, falling below average in every main category.

Even though it's more than likely the Packers make the playoffs with him, their overall personnel can't compete with the rest of the dominant NFC, and a Super Bowl run would have been a stretch.

Before he tore his ACL in week 13, Wentz was the clear MVP favorite. He threw for 3300 yards, 33 touchdowns and only 7 interceptions, while leading his Eagles to a 11-2 record.

Without Wentz, the Eagles were still able to decimate the hapless Giants, but only managed 19 points against the porous Raiders defense and were shutout by the Cowboys in week 17.

With Wentz, the Eagles averaged 28 points per game and only scored less than 20 points once.

Even with a solid team around backup quarterback Nick Foles, the Eagles went for Super Bowl favorites to long shots after his devastating injury.