US beats Slovakia 5-1, will play Czechs in Olympic quarters 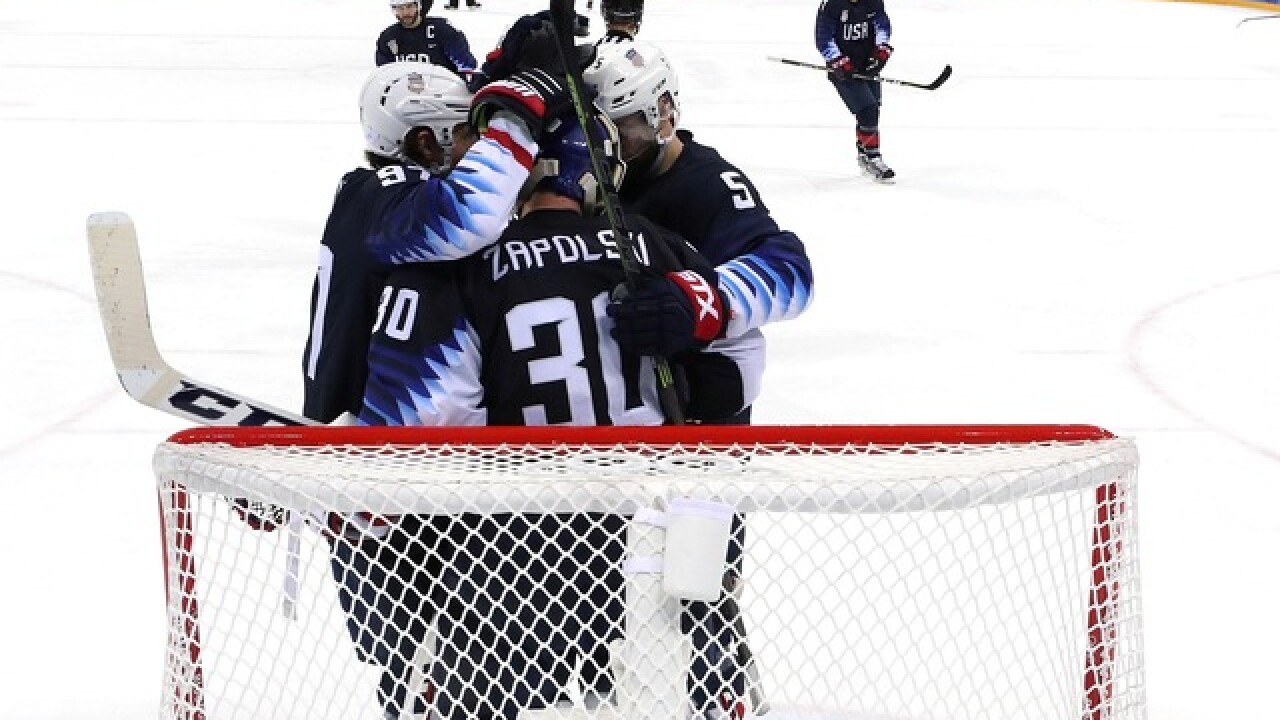 GANGNEUNG, South Korea (AP) — Ryan Zapolski was more worried about losing the sensation in his hands and feet than carrying the pressure of the United States' Olympic medal hopes on his shoulders.

In a frightening play, Ladislav Nagy crashed into Zapolski's head and the goaltender was down on the ice for several minutes Tuesday. Zapolski recovered and ended up delivering perhaps his best game so far as the Americans beat Slovakia 5-1 in an elimination game to reach the quarterfinals, where they will face the Czech Republic on Wednesday.

The U.S. had scored only four goals in its previous three games at the Olympics, but Ryan Donato scored twice and fellow collegiate player Troy Terry had three assists. With the offense finally clicking, the U.S. needed Zapolski to be on his game and he was, stopping 21 shots and playing after jamming his neck.

"My hands and feet went numb a little bit, so it just kind of pinched my nerve, I guess," Zapolski said.

"I think I just needed time for the feeling to come back. It took a little bit. It was a little bit of a scary thing for me kind of losing feeling in your body for a little bit, but it went away pretty quickly."

The U.S. got two scares simultaneously when Zapolski and Donato went down following hits to the head. Zapolski insisted he never felt concussion symptoms from the collision with Nagy, while Donato said he felt fine after taking a shoulder to the jaw from 6-foot-4 Slovakia defenseman Michal Cajovsky, who was ejected.

Donato has four of the Americans' five goals, and Zapolski has started every game. Losing them both would have been devastating, but instead they shook it off and were two of the best players on the ice.
"We all had to show up," Zapolski said. "We know we have to win now to keep moving on. I think that's something that shows how strong this team is and how resilient we are. We had I think our best game today."

Donato scored two goals to tie his father, Ted, with four in a single Olympics. Between periods, Donato saw video of his dad — who had four goals for the U.S. at the 1992 Albertville Games and coaches him at Harvard — in the stands and said, "I've never seen him smile like that before." Donato also scored twice against Slovakia in a 2-1 win in group play.

Terry showed he can thrive on the big stage and overall it was a breakout performance by a team that needed one.

The offensive outburst included a 5-on-3 power-play goal by James Wisniewski and goals at even strength by Mark Arcobello and Garrett Roe. Donato added his goals and shook off the hit from Cajovsky that left him with a bloody nose. Fearing it was broken, Donato didn't miss a shift and set the screen on Wisniewski's goal.

"He's a really tough kid, and you see how much just of a natural goal-scorer he is," Terry said. "He's fun to play with and if I get the puck to him I know it's got a pretty good chance of going in."
Slovakia scored a second-period power-play goal by Peter Ceresnak through traffic that Zapolski had little chance of stopping. Zapolski didn't have any flashbacks to blowing a two-goal lead in an overtime loss to Slovenia, and there was enough offense to make sure that didn't happen.

Scoring five goals against the team coach Tony Granato called perhaps the best defensive team in the tournament has the Americans feeling good going into the quarterfinals.

"I think people saw tonight we have a very fast team and a team that can play good hockey," Terry said. "So we have a lot of belief in our team and we're excited to keep going."

Despite a 4-0 loss to the Russians to wrap up group play, Granato and his players believe they've gotten better each game and see a benefit in playing the extra qualification-round game to keep improving. The Czech Republic is up next for the U.S.

"There's some different weapons that we'll have to be aware of," Granato said. "I think what we learned from our team is it doesn't matter what the other team does. We have to attack, we have to get in on the forecheck, we have to use our offensive players that we do have, the skillset that we do have."

Elsewhere in the qualification round: