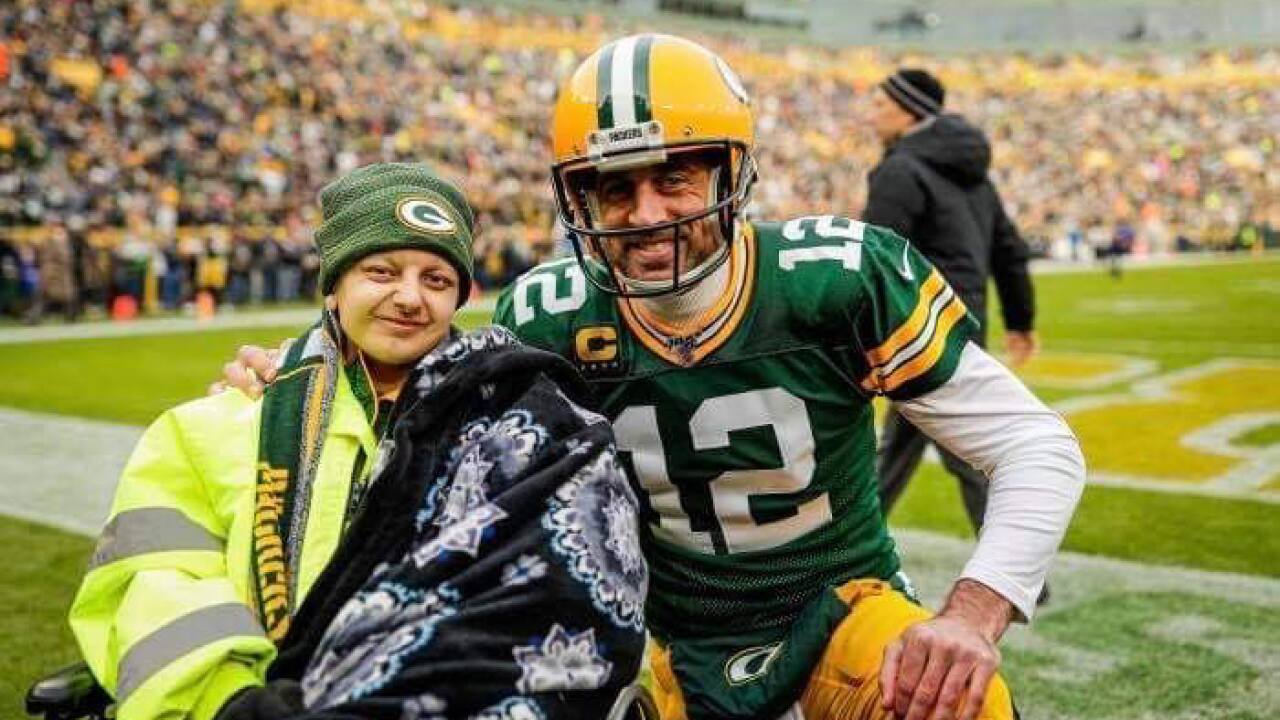 GREEN BAY — A teen from Plymouth was granted the wish of a lifetime when he got to meet Aaron Rodgers, and hang out with the team before Sunday's game.

Isaiah Gravelle, 17, was diagnosed with a form of cancer called Rhabdomyosarcoma (RMS), stage four, in December 2018. He was admitted into the hospital Christmas Eve of that year and has been fighting ever since.

Earlier this year, Isaiah was offered a Make-A-Wish wish and decided he wanted to be a Packer for a day. This past weekend, that wish came true.

On Thursday, Isaiah headed up to Green Bay with his mom, grandpa, and cousin to stay at the Tundra Lodge. Part of his wish was to stay at the lodge and swim. However, Isaiah got a fever and was admitted to the hospital.

On Friday, backup quarterback Tim Boyle heard that Isaiah was hospitalized so he decided to visit him. He contacted Isaiah's mom, Amy, and set it up. While he was there, they Facetimed Rodgers together.

Amy said Boyle and Isaiah first met earlier this year at a Plymouth Panthers football game. She said that's another reason Boyle came to visit Isaiah in the hospital. He remembered Isaiah.

"He gave Isaiah two pairs of his cleats, his duffel bag, and a hat he wore on the sidelines," said Amy. She said the duffel bag had bracelets from all different stadiums and his special name tags on it.

Boyle spent two hours with Isaiah. Amy said Boyle has been "such a light for Isaiah. He has the best heart." She also said Boyle deserves most of the credit for Isaiah's experience.

When Saturday rolled around, Isaiah was still in the hospital but was offered a Packers day pass.

"A limo picked us up and brought us to the happiest place on earth. We love our Packers," said Amy.

The family took a tour of Lambeau, watched practice, and ate lunch with the Packers. Amy said they mostly ate with Rodgers and Boyle. Isaiah also got a swag bag, pictures, and autographs.

On Sunday, the limo picked up the family once again and took them to the game. Isaiah and his family got to go down on the field before the game, where punter JK Scott prayed for Isaiah. He was also able to get more pictures with the team. Additionally, Isaiah had given Boyle a bag of #IsaiahStrong bracelets on Saturday which Boyle handed out at the team meeting. Amy said several of the guys were wearing them at the game on Sunday.

When Rodgers approached Isaiah for a photo Sunday, he told Isaiah he looked good and that he was glad he could make it to the game. The Packers took to Facebook to share the moment.

The family got to stay and watch the game, in addition to checking out the Hall of Fame. Boyle also gave Isaiah his game towel.

"It made him [Isaiah] feel special and loved when Scott held our hands and prayed for him. He knows he has a forever friend in Tim Boyle. He feels really loved," said Amy.

We asked Amy how Isaiah was doing and she said his tumors are shrinking very slowly. They have been trying a new type of chemotherapy which, Amy thinks, is the reason he ended up in the hospital in Green Bay. Isaiah's doctors are now discussing putting him in a trial that should be opening soon.

"He's doing okay," said Amy. "Treatment was supposed to end in February. We are far from the finish line."