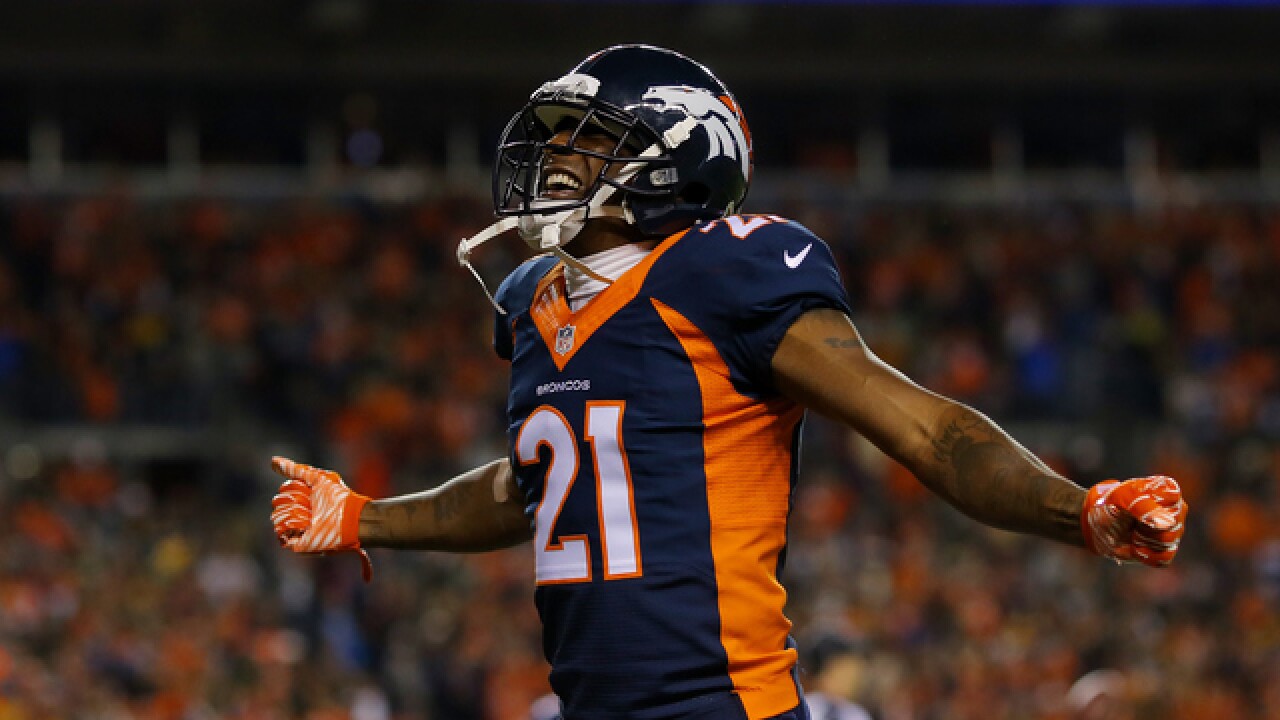 Copyright 2018 Scripps Media, Inc. All rights reserved. This material may not be published, broadcast, rewritten, or redistributed.
Justin Edmonds
DENVER, CO - NOVEMBER 01: Aqib Talib #21 of the Denver Broncos celebrates the Broncos' safety in the fourth quarter against the Green Bay Packers at Sports Authority Field at Mile High on November 1, 2015 in Denver, Colorado. (Photo by Justin Edmonds/Getty Images)

"A guy who I would definitely love to play with is Aqib Talib," Daniels said on NFL Total Access. "He's a little nuts ... but he's a great veteran presence. We did a good job bringing Davon (House) back in that corner room. It always good to have veterans at a position like that."

Wednesday, Talib quote tweeted an article by NFL.com's Ian Rapoport titled "Broncos could look to move Aqib Talib this offseason" with "Who coming to get me."

Thursday, Daniels responded to Talib's post saying, "I got you bro."

@AqibTalib21 I got you bro

"One piece the Packers need to get back to the playoffs in 2018?@Mike_Daniels76 has two Pro Bowl CBs on his mind 👀

But Daniels hasn't been the only suitor. The Buccaneers Gerald McCoy, the New York Giants Damon Harrison and the Houston Texans DeAndre Hopkins informed Talib of their interest.

However, the Packers might not want to mess with the oft-troubled cornerback.

Last season, the 32-year-old Talib was suspended one game for fighting with Oakland Raiders receiver Michael Crabtree after Talib snatched his chain for the second time.

And in 2015, he was suspended one game for brutally poking Colts tight end Dwayne Allen in the eye.

Off the field, the 11th year pro out of Kansas admitted to shooting himself in the leg back in June of 2016. According to the police report, Talib said he didn't know who shot him and that the bullet "entered into the rear of his right thigh then exited his right calf."

He was not reprimanded by the NFL for the situation.

Though Daniels, based on a retweet from his Twitter account Thursday, doesn't seem to have a problem with his checkered past.

Talib gets a bad rap for some of his actions. But passion on the field is something the Packers D would likely benefit from and feed off of. #gimmethatchain

Despite his troubles, the 6'2 , five-time Pro Bowl corner has been excellent over his last four years with Denver.

In 58 games, he's collected 11 interceptions, scored 6 touchdowns, was named to the All-Pro team in 2016, and was an anchor to the Broncos 2015 Super Bowl championship team.

But that success doesn't necessarily mean Talib would have a hefty price tag if the Packers chose to make a run at him.

Rapoport reported that his roster spot could be in jeopardy given his age and big contract, and the team could save a lot by jettisoning him off the team

However, there are also trade rumors circulating.

"I would not be surprised if the Broncos had some talks about potentially trading him this week. ... He's got a big contract, but he's still a very, very good player and teams know that. They have seen the film; they've watched him for years. His play really has not dropped off despite the fact that he's gotten older."

If the Packers aren't able to land Daniel's dream cornerback, he threw out another option on NFL Total Access.

The 27-year-old Butler is a free agent this offseason.