Posted at 9:25 AM, Jan 20, 2017
MADISON – Governor Scott Walker issued a proclamation declaring January 20, 2017, as Green and Gold Day throughout Wisconsin in anticipation of the Green Bay Packers NFC championship game versus the Atlanta Falcons this Sunday, January 22, 2017.

In a news release, the Office of Governor Walker issued the following statement with the proclamation:
Earlier this season, the Green Bay Packers’ chance of even making the playoffs seemed slim. With a record of 4-6, rival teams, reporters, commentators, and even a few of our own fans dismissed the Packers as a serious contender. Instead of throwing in the towel, the team came together, pushed one another, and gave 110 percent.
When Aaron Rodgers first stated the Packers could “run the table,” many thought such a comeback was impossible. But here we are, ready to take on the Atlanta Falcons in the NFC championship game. I’m proud to declare today Green and Gold Day throughout Wisconsin and encourage all Packers fans to wear green and gold in support as we prepare to overcome this final hurdle on the road to Superbowl LI. I look forward to joining the Packer Nation in cheering our team on to victory this Sunday. Go Pack Go! 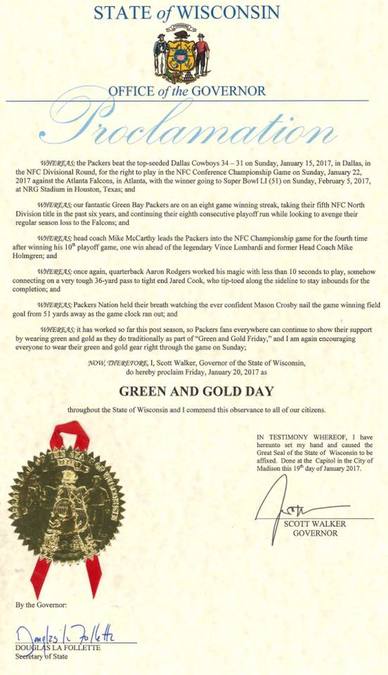