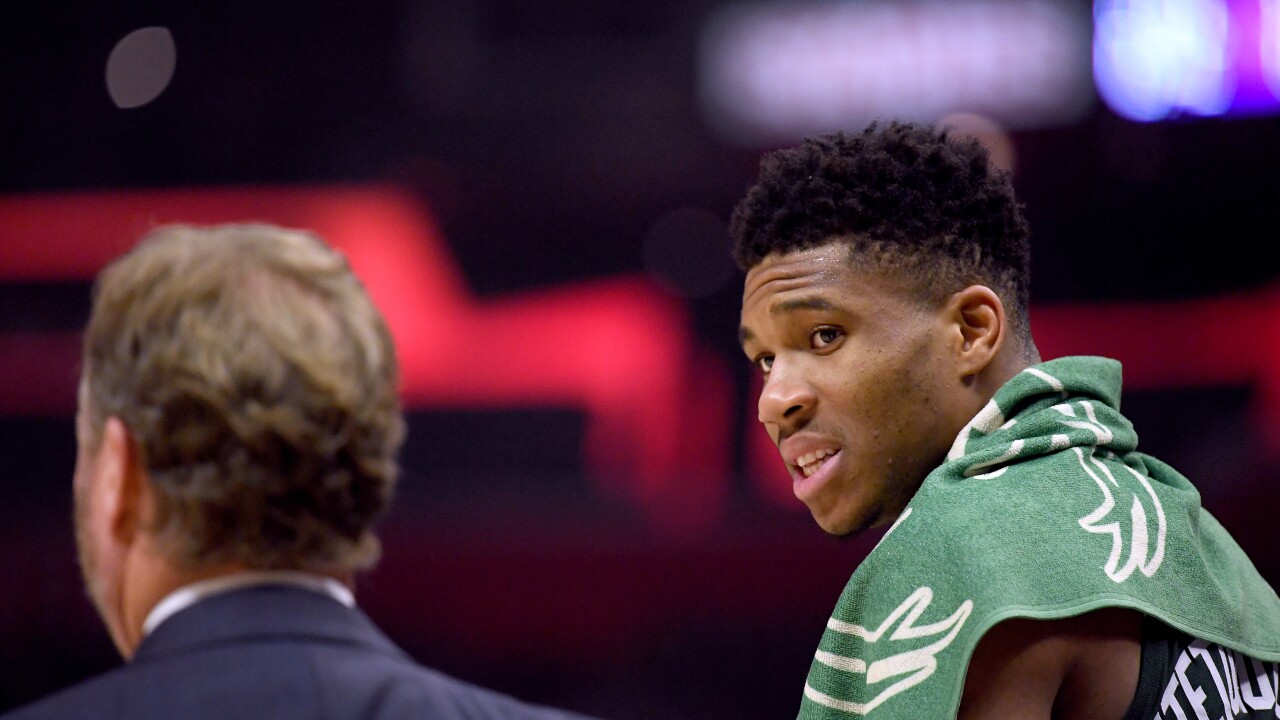 Harry How/Getty Images
LOS ANGELES, CALIFORNIA - NOVEMBER 06: Giannis Antetokounmpo #34 of the Milwaukee Bucks speaks to head coach Mike Budenholzer during a 129-124 Bucks win over the LA Clippers at Staples Center on November 06, 2019 in Los Angeles, California. (Photo by Harry How/Getty Images) NOTE TO USER: User expressly acknowledges and agrees that, by downloading and or using this photograph, User is consenting to the terms and conditions of the Getty Images License Agreement.

Giannis Antetokounmpo needed only 14 minutes on the court to record another double-double, finishing with 29 points and 15 rebounds as the Milwaukee Bucks won their 12th straight game in a 132-88 rout of the New York Knicks on Monday night.

The Bucks (18-3) led by as many as 47 and cruised behind Antetokounmpo, who pulled down his 10th rebound with 4:43 left in the second quarter for his NBA-leading 20th double-double.

The reigning MVP shot 10 of 14 from the field, including 3 of 4 from 3-point range, while playing 22 minutes. He exited with nearly five minutes left in the third quarter and the Bucks ahead 93-54.

Milwaukee’s winning streak is the longest in the NBA this season and the franchise’s longest since the 1981-82 season. The Bucks own the league’s best record, ahead of the Los Angeles Lakers (17-3).

D.J. Wilson added a career-high 19 points, Khris Middleton had 16 and George Hill 14 for the Bucks, who improved to 9-1 at home.

The only Antetokounmpo playing in the fourth quarter was Giannis’ older brother Thanasis, who drew cheers from the crowd when he slipped in for a layup early in the period. Thanasis Antetokounmpo finished with 10 points and three assists.

Knicks: Point guard Frank Ntilikina was out after injuring his back in New York’s 113-104 loss to Boston on Sunday at Madison Square Garden. Dennis Smith Jr. started in his place and went 1 for 7 from the field while scoring four points. Veteran forward Marcus Morris (cervical spasms) missed his second consecutive game.

Bucks: Middleton returned to the starting lineup after coming off the bench the previous three games. He averaged 14.3 points in his three games as a reserve, after being sidelined for seven games with a bruised left thigh. Middleton had 10 points in the first six minutes of the game. … Brook Lopez (back soreness) was out for a second straight game, but coach Mike Budenholzer was optimistic the 7-foot-1 center would return soon. “Giving him a couple games is going to be really wise in the long run,” Budenholzer said. “Unless something changes he will travel with us and we’re hopeful he will play Wednesday (at Detroit).”

Giannis Antetokounmpo was named the Eastern Conference player of the week after he averaged 34.8 points, 11.3 rebounds and four assists in four games last week. That included a 50-point outburst against Utah, the second 50-point game of his career.

“I think that’s where the misconception is,” Fizdale said. “Giannis has been a creator since back when Jason (Kidd) was coaching. Jason had him playing point. He’s an unselfish player; he’s always been a player who likes to get his teammates involved. Since Bud (Budenholzer) has been here, the space that he’s created around him has opened a whole set of issues for other teams.”

Bucks: At the Detroit Pistons on Wednesday.