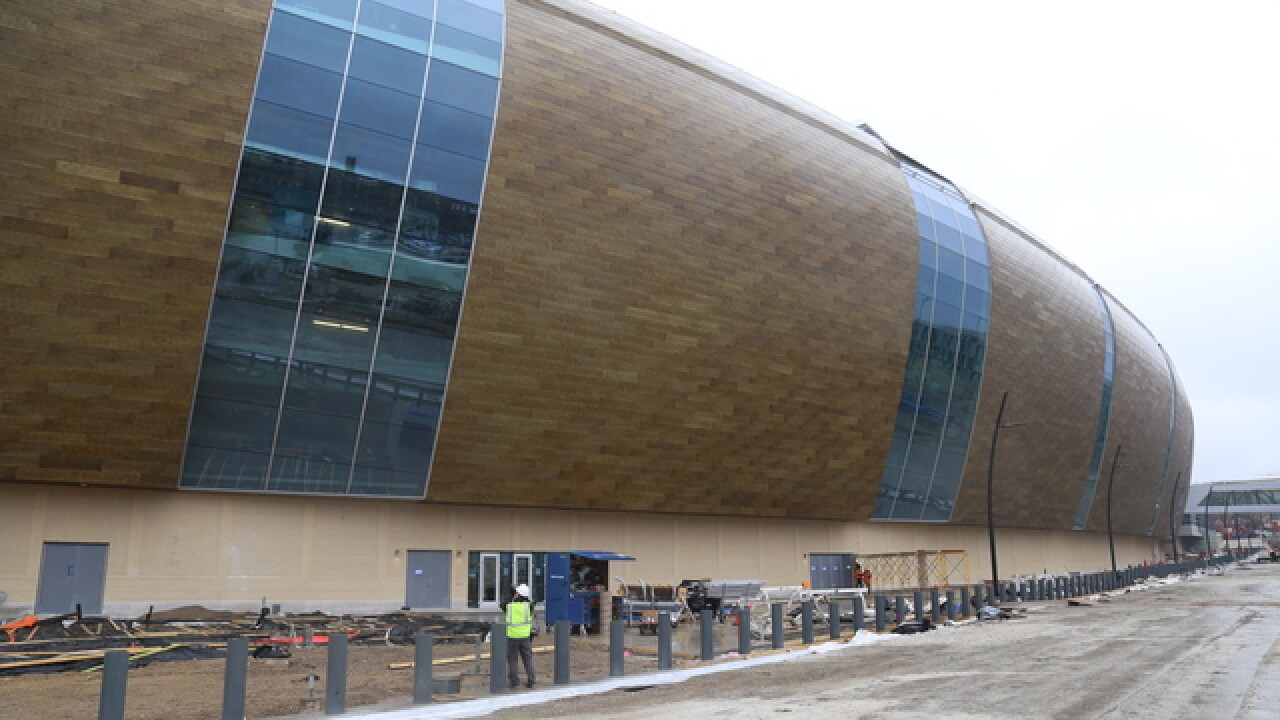 MILWAUKEE -- The new Bucks arena doesn't have a name yet but it's starting to take shape. While it still looks like a construction project, they're in the 'finishing touches' phase of construction.

"We're getting down to over 90 percent completion," Bucks President Peter Feigin said. At the center of the arena, a huge LED Video Board is just feet from the ground. The gigantic screen isn't the only noticeable addition. The bright LED lighting in the arena is a big difference as well.

"They're only lit on the court and the rest of the arena is dark. This is a totally different concept. For us, it's open arena. We want everyone to see each other. We want it to be light, bright, clean. What you're seeing is the next generation of LED lights for sports and entertainment. It's kind of like the Falcons on a smaller more intimate platform."

The scoreboard took up a large portion of the event floor as they put finishing touches on it. But even at this point of construction, you can feel the amount of seats in the lower bowl. Feigin says there are about 10,000 seats in the lower bowl of the new arena, as compared to the 6,000 at the Bradley Center.

The intimacy of the arena paired with the size of the video board will add to the fan experience.

"It's not the largest, but if you took it for ration for size of arena, it would definitely be one of the largest in a sense," Feigin said. "You can kind of see around. It's not going to be one center hung board. They're going to be LED and high aspect ratio screens all around the arena."

It seems like it wasn't too long ago they were first breaking ground on the arena. But compared to the blueprints, Feigin says it's pretty surreal how it's come into form. The focus lately has been on naming rights for the stadium, to which there still isn't a choice. Feigin says they're getting closer every day.

But what he's likely most pleased with is the layout of the arena.

"It's really hard to navigate stadiums and arenas these days," Feigin said, standing in one of the concourses. "This is a wide open, open concourse arena. You can navigate vertically. You can navigate horizontally, across the arena, you can get to any place in the arena and it's pretty simple."

The goal is to make the arena experience feel like fans are more at home and more comfortable. The wider concourses are more of a gathering place than a thoroughfare. The hope is it will serve as a before and after venue for the events.

"This will be an incredible comfortable place to come and hang out before a game, during a game and after a game which is part of the whole concept of really, literally, what the open concourse means," Feigin said. "This is all about the experience."

The open arena concept isn't limited to the concourse either. Even a section of suites have the ability to go open. A section of six suites can be individual suites to fit 30 people, or some areas can drop down and make it one area to fit 180 people for a large event.

"This is what makes this arena in Milwaukee so special," Feigin said. "This just doesn't exist in other places at this expanse."

The arena will run a few tests in late July or early August and is scheduled for a grand opening of sorts in September.