Kyrie Irving's injury could open door for Bucks in playoffs 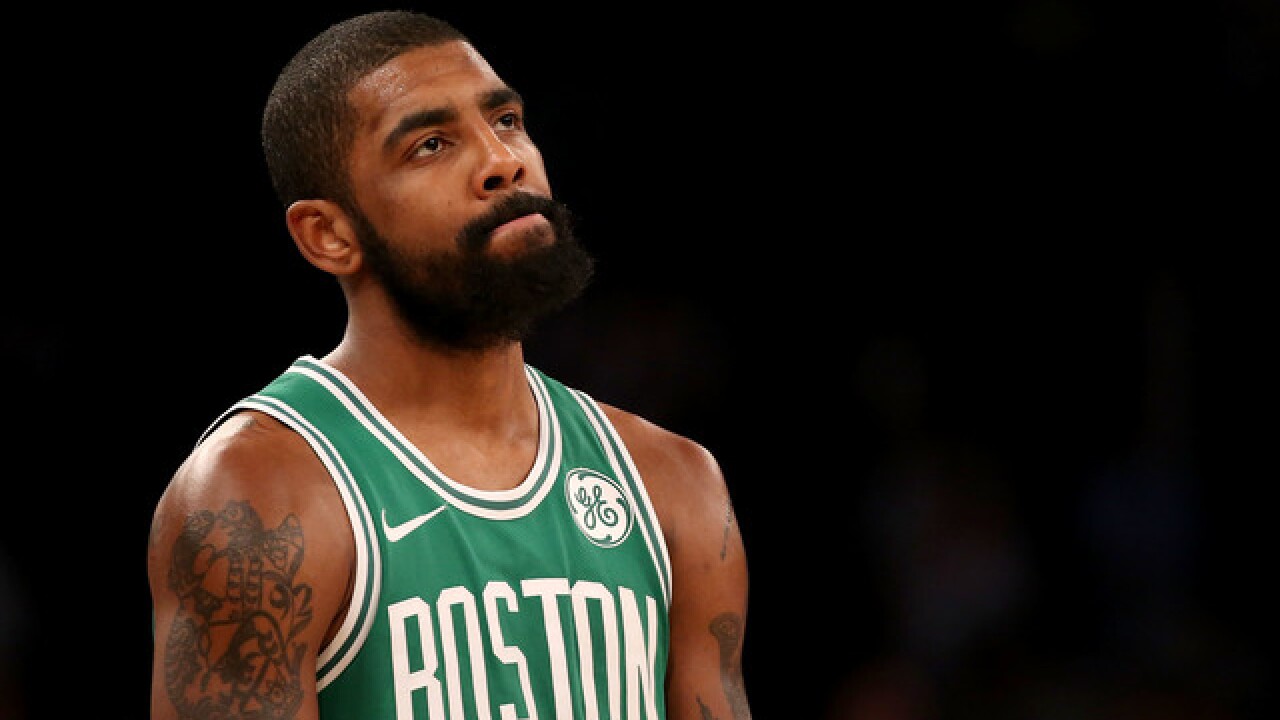 Copyright 2018 Scripps Media, Inc. All rights reserved. This material may not be published, broadcast, rewritten, or redistributed.
Abbie Parr
NEW YORK, NY - DECEMBER 21: Kyrie Irving #11 of the Boston Celtics reacts late in the fourth quarter against the New York Knicks during their game at Madison Square Garden on December 21, 2017 in New York City. NOTE TO USER: User expressly acknowledges and agrees that, by downloading and or using this photograph, User is consenting to the terms and conditions of the Getty Images License Agreement. (Photo by Abbie Parr/Getty Images)

With the news that Boston's superstar guard Kyrie Irving will miss the remainder of the 2018 season, including playoffs, the door has potentially swung open for the Milwaukee Bucks to make a run.

The Bucks don't own tiebreakers against either team , so to earn to the six seed they'd most likely have to win out.

But it's not the six seed Milwaukee wants, it's the seven seed. At this point, the Celtics are all but locked into the two seed . Their 53-35 record puts them 3 games back of the first place Raptors and 5 games ahead of the three seed Cavilers.

In what has been an underwhelming year for the Bucks, especially on the defensive end , running into the injury ravaged Celtics in the first round could provide the boost of confidence the Bucks need to actualize their potential as one of the better teams in the East.

Boston has been down on it's luck since the first game of the season when their big free agent splash, Gordan Hayward, fractured his ankle on opening night for the whole world to see.

Hayward was recently spotted jogging, but like Irving, will be donned in his nicest Gucci suit on the bench for the entirety of the playoffs.

The Bucks recently played this iteration of the Celtics, a young team captained by Jayson Tatum, Jaylen Brown and Al Horford, and came out on top 106-102 at home.

It wasn't the prettiest result, Brown dropped a team high 24 and Tatum added 20. Plus, Giannis Antetkounmpo clocked in at -11 on the night.

And despite the Celtics injuries, the Bucks trailed for large stretches of time, and when they got a lead late in the third quarter, they could never put the game away.

If the Bucks and Celtics do end up facing off, NBA experts don't anticipate an easier time for Milwaukee.

Boston has gone 12-6 in games without Kyrie Irving and the combination of Tatum and Brown has been lethal.

In a comical twist, ESPN's Kevin Pelton said the Celtics should be hoping they face off against the Bucks in the first round rather than the Wizards or Heat.

Make no mistakes, the Celtics remain an incredibly dangerous team despite losing two of the league's better players, but the crew they have on the floor doesn't have anywhere near the experience Irving has.

The 26-year-old Irving has played 52 playoff games in his young career and has one championship ring.

The only person left on the roster with real playoff experience is Al Horford, and even though the 31-year-old has improved in his second season in Boston, he's not the type to carry a team. He's only scored 20 points 11 times this season.

Looking around the Eastern conference, there aren't too many players better than the Bucks 6'11, do-it-all MVP caliber forward Antetkounmpo.

Plus, Antetokounmpo is coming off a huge playoff series against the Raptors last year where he exploded for 22 points, 8 rebounds and 3.5 assists per contest.

The team tried to remedy that by shedding head coach Jason Kidd in January when they were a less than impressive 23-22 overall, and while they have improved record wise under new coach Joe Prunty (19-14) most NBA analysts agree they haven't seen a huge on the court difference.

With or without Irving, things will need to change if the Bucks want to advance into the second round of the playoffs.

If the Bucks do earn the seven seed and advance past the Celtics, it would most likely set up a second round match against the Cavilers. LeBron vs. Giannis on the biggest stage in the NBA is something everyone wants to see.