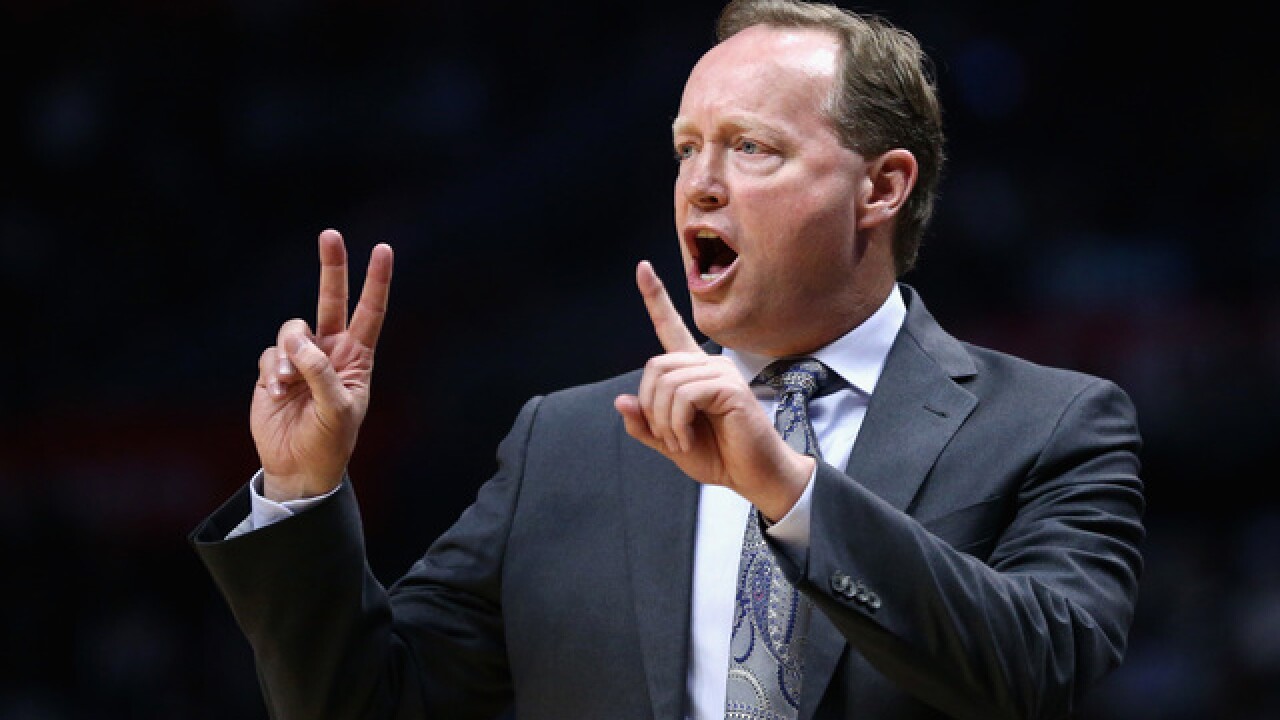 Copyright 2018 Scripps Media, Inc. All rights reserved. This material may not be published, broadcast, rewritten, or redistributed.
Sean M. Haffey
LOS ANGELES, CA - FEBRUARY 15: Head Coach Mike Budenholzer of the Atlanta Hawks calls a play during the second half of a game against the LA Clippers at Staples Center on February 15, 2017 in Los Angeles, California. NOTE TO USER: User expressly acknowledges and agrees that, by downloading and or using this photograph, User is consenting to the terms and conditions of the Getty Images License Agreement. (Photo by Sean M. Haffey/Getty Images)

Khris Middleton was also in attendance. There is no word on where the trio went, what they ordered or if they had to wait for a table.

Budenholzer has been at the top of the Bucks head coaching candidate list throughout the offseason, and this only affirms the interest from the two sides.

The 2014-2015 NBA coach of the year had his second interview with the Bucks in New York yesterday, according to multiple sources, and this interview, unlike the first included Milwaukee's ownership group.

Budenholzer and San Antonio Spurs assistant coach, Ettore Messina, are considered to be the top two finalists for the job, according to ESPN's Adrian Wojnarowski.

It seems like the Bucks are locking on a particular coaching methodology, both the Italian head coaching legend Messina and Budenholzer have spent multiple years on the bench of Spurs head coach Gregg Popovich.

The 48-year-old Budenholzer served under the legendary coach from 1996 to 2013, where he earned four NBA Championship rings, before becoming the head coach of the Hawks. Messina, 58, has been with the Spurs since 2014 and has a long, prolific career oversea swinning four Euroleague titles from 1998 to 2008.

But despite the late interest from Messina, the Bucks have locked onto Budenholzer, who appeared to be a perfect match for the team before the Toronto Raptors parted ways with their head coach Dwayne Casey and made Budenholzer their top target.

Toronto and Milwaukee are both prepared to send competing offers toward Budenholzer in the coming days, per Wojnarowski.

Milwaukee's pitch to Budenholzer centers around Giannis, a strong supporting cast and a new area, while Toronto's is focused on a proven winning core and a former NBA Executive of the year in the front office, per Wojnarowksi.

During his tenure with the Hawks, Budenholzer coached the team to a 213-197 record and four playoff berths. He appeared in the Eastern Conference finals in 2015, with his team earning the one seed, but was bounced by the LeBron James led Cavilers in four games.