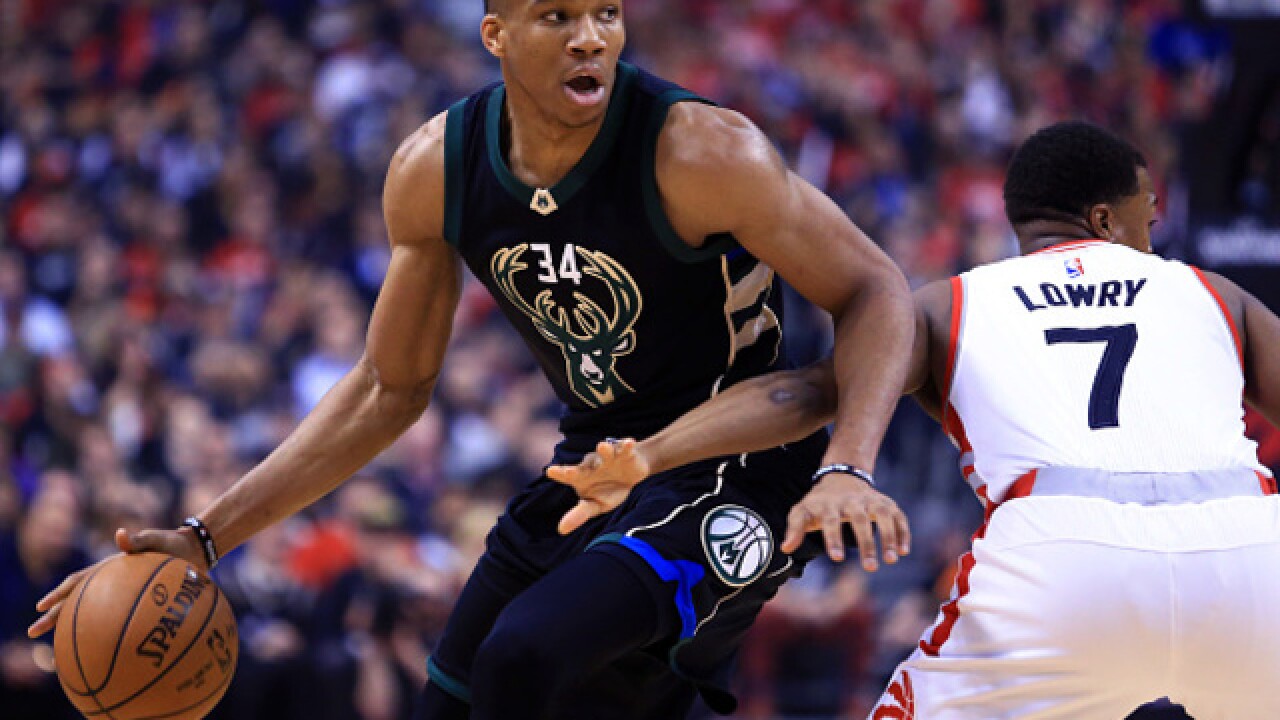 Copyright Getty Images
Vaughn Ridley
<p>TORONTO, ON - APRIL 15: Giannis Antetokounmpo #34 of the Milwaukee Bucks dribbles the ball as Kyle Lowry #7 of the Toronto Raptors defends in the first half of Game One of the Eastern Conference Quarterfinals during the 2017 NBA Playoffs at Air Canada Centre on April 15, 2017 in Toronto, Canada. NOTE TO USER: User expressly acknowledges and agrees that, by downloading and or using this photograph, User is consenting to the terms and conditions of the Getty Images License Agreement. (Photo by Vaughn Ridley/Getty Images)</p>

The Milwaukee Bucks are off to a hot start in the NBA playoffs. Jason Kidd's crew took down the Toronto Raptors in game one of their series north of the border. They won in decisive fashion 97-83.

Given that the game was on the road and not within driving distance, the Bucks’ faithful had to catch the game locally. Those who made their way out to the official Bucks watch party were in for a sideline atmosphere at Leff's Lucky Town in Wauwatosa.

A rowdy sea of green spilled out past the patio for Milwaukee Bucks' first playoff game in two years.

"We've got all green from head to toe, we've got bucks socks on and we of course got the Greek flag," said fan Nick Korom.

"I can't spell his last name off the hook but Giannis," said fan John Kocher.

Fans watched Antentokounmpo and company in style on a screen worthy of the movie theatre.

"It's huge, it's at least ten by ten," said Leff’s manager Allan Sharpton.

"This is unbelievable, I need one of these for my man cave except it wouldn't fit," said Kocher.

Sharnissa Dunlap-Parker is a Bucks season ticket holder. She couldn't make the trip to Toronto so Leff’s view and lively atmosphere provided the next best option.

"It's so awesome; it's Milwaukee so this is what we do," she said.

As the Bucks took a commanding lead in the second half and coasted to a 14 point victory, fans says they now have high hopes for a deep playoff run.

"I think the Bucks win this in seven," said Korom.

"I think any team that has to go up against us, I feel sorry for them," added Kocher.