Bucks bow out of NBA Playoffs, fall in Game 6 to Raptors 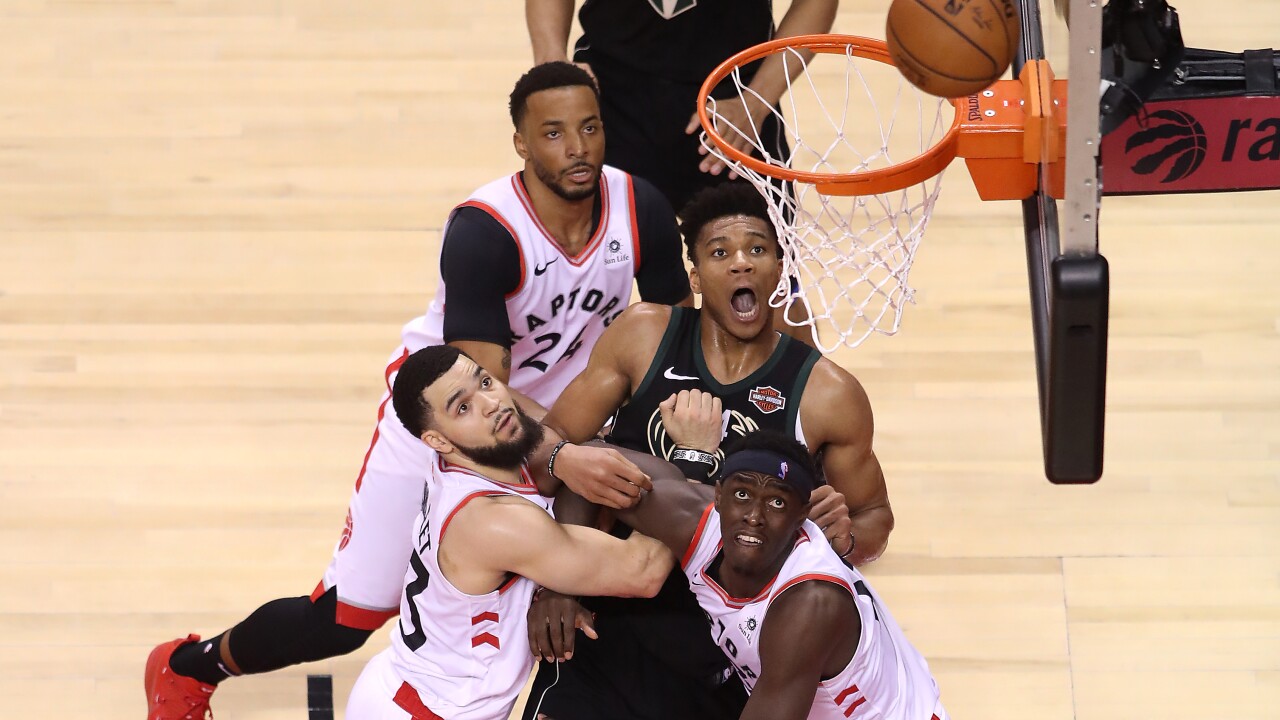 Claus Andersen/Getty Images
Toronto&#39;s Norman Powell (24), Fred VanVleet (23) and Pascal Siakam box out Milwaukee&#39;s Giannis Antetokounmpo during the second half. The host Raptors won 100-94 in Game 6 of the Eastern Conference Finals on Saturday night to win the series 4-2.

TORONTO (AP) — Kawhi Leonard had 27 points and 17 rebounds to lead the Toronto Raptors into the NBA Finals for the first time with a 100-94 victory over the Milwaukee Bucks on Saturday night.

The Raptors overcame a 15-point deficit to win the series in six games and will host the Golden State Warriors in Game 1 of the NBA Finals on Thursday night.

Pascal Siakam scored 18 points, Kyle Lowry had 17 and Fred VanVleet 14 for the Raptors, who used a 26-3 run late in the third quarter and early in the fourth to turn the game in their favor.

Giannis Antetokounmpo led the Bucks with 21 points and 11 rebounds, but the NBA's top team in the regular season saw its bid for a first Finals berth in 45 years come to a disappointing end with a fourth consecutive defeat.

Down 76-71 to start the fourth, the Raptors tied it with an 8-2 run while Leonard and Antetokounmpo were both on the bench. Serge Ibaka's dunk with 10:32 to go tied it at 78.

Antetokounmpo returned after a timeout, but Leonard kept sitting. That didn't matter to Toronto, with Siakam's basket giving the Raptors an 80-78 lead, their first lead since it was 6-3.

Leonard's one-handed slam after Lowry's steal gave Toronto an 87-79 lead with 6:46 to go before the Bucks responded. George Hill answered with a layup, Brook Lopez converted a three-point play, and Antetokounmpo scored to cut it to 87-86 with 5:19 to go.

Lowry and Lopez swapped baskets before Marc Gasol's 3 put the Raptors up 92-88 with 3:50 left. After another basket by Lopez, Leonard made a 3 to push Toronto's lead to 95-90 with 3:04 to play. It was Leonard's first 3 after missing his first seven attempts of the game.

Siakam, who missed a pair of free throws late in the fourth quarter of Toronto's double-overtime win in Game 3, hit one to make it 98-94. Leonard grabbed the rebound on the second and was fouled. He made both, putting the Raptors up 100-94 with 3.9 seconds to go.

Malcolm Brogdon and Khris Middleton each made a pair from long range as the Bucks shot 6 for 9 from 3-point range in the first and closed the quarter with 10 unanswered points to lead 31-18. Toronto shot 6 for 19 in the opening quarter, missing six straight twice in the first 12 minutes.

The Bucks extended their lead to 38-23 on a 3 by Ersan Ilyasova with 7:46 left until the half. Toronto cut the gap to 46-43 on a 3 by VanVleet with 1:07 left in the second, but Eric Bledsoe answered with a 3 and Antetokounmpo split a pair at the line, giving the Bucks a 50-43 advantage at the intermission.

The lead went back to 15 in the third before Leonard finished the period with a flourish. He had eight points in the final 2:01 and Toronto closed with a 10-0 run, cutting a 15-point deficit to 76-71.

Bucks: Milwaukee shot 4 for 16 in the second, but three of its made baskets were 3-pointers. ... The Bucks had six points in the paint in the first half. ... Coach Mike Budenholzer was called for a technical foul on Milwaukee's first possession of the second half. Leonard missed the free throw. ... Antetokounmpo shot 5 for 10 at the free throw line.

Raptors: Danny Green, who missed all three of his field goal attempts in 16 minutes in Game 5, had another rough night. Green shot 0 for 4 in 14 minutes. ... Leonard's 17 rebounds were his most in any game this postseason. ... Lowry had eight assists.

Raptors fan and "global ambassador" Drake sat in his regular seat adjacent to the Toronto bench. The rapper wore a black hoodie with 'KAWHI ME A RIVER' printed on the back.

The NBA Finals comes to Canada for the first time when the Raptors host the Warriors on Thursday night. Toronto swept Golden State in the regular season.