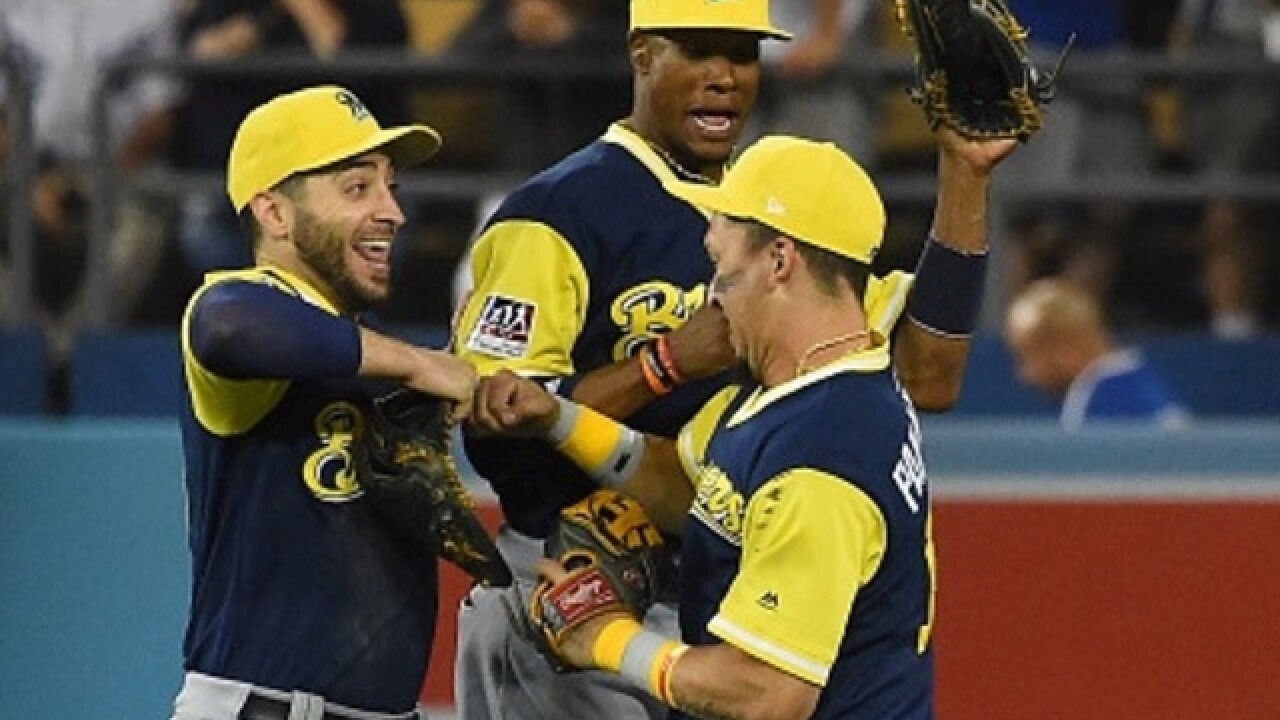 By: AP
Posted at 12:38 PM, Aug 27, 2017
LOS ANGELES (AP) -- Zach Davies pitched seven dominant innings for his second scoreless start against the Los Angeles Dodgers this season, and Orlando Arcia hit a two-run homer in the Milwaukee Brewers' 3-0 victory Saturday night.
Davies (15-7) also held the major league-leading Dodgers (91-37) without a run over six innings in a June 4 win at Milwaukee.
Los Angeles went with a bullpen game, using six relievers. All were effective but Josh Ravin (0-1), who gave up a leadoff single to Manny Pina in the fifth and then Arcia's 13th home run.
Davies allowed only three hits. He did not walk a batter and struck out seven.
Anthony Swarzak worked the eighth and Corey Knebel pitched the ninth for his 28th save.
The Dodgers' best scoring chance against Davies came with two outs in the fifth when Chase Utley and Austin Barnes singled. Davies struck out pinch-hitter Adrian Gonzalez to end the threat.
Yasiel Puig doubled in the second for the Dodgers' only other hit against Davies, and provided the defensive play of the night. In the sixth, Domingo Santana sent a drive just inside the right-field foul pole. Puig sprinted over and made a reaching catch as he hit the short wall, preventing a likely home run.
The Brewers tacked on a run in the eighth against Luis Avilan. Hernan Perez singled and scored on Neil Walker's double under the glove of third baseman Justin Turner.
It was the second time the Dodgers have been shut out in their past four games.
TRAINER'S ROOM
Brewers: Manager Craig Counsell said C Andrew Susac (right trapezius) is expected to go out on a rehab assignment early next week. . Counsell said C Jett Bandy (broken rib) is expected back this season but not when rosters expand on Sept. 1.
Dodgers: LHP Clayton Kershaw (lower back strain) threw five innings in his first rehab start for Triple-A Oklahoma City. He allowed one run and two hits, did not walk a batter and struck out eight. . 1B-LF Cody Bellinger (ankle) completed a full workout without issue and is expected to be activated from the disabled list when eligible Wednesday.
UP NEXT
Brewers: RHP Jimmy Nelson (9-6, 3.79 ERA) is 0-2 lifetime in four starts against the Dodgers but with a 1.33 ERA.
Dodgers: RHP Yu Darvish (8-9, 3.83) is scheduled to come off the disabled list (lower back stiffness) and make his fourth start for the Dodgers. He is 2-0 with a 2.50 ERA in his three previous starts for Los Angeles.
Copyright 2017 The Associated Press. All rights reserved. This material may not be published, broadcast, rewritten or redistributed.