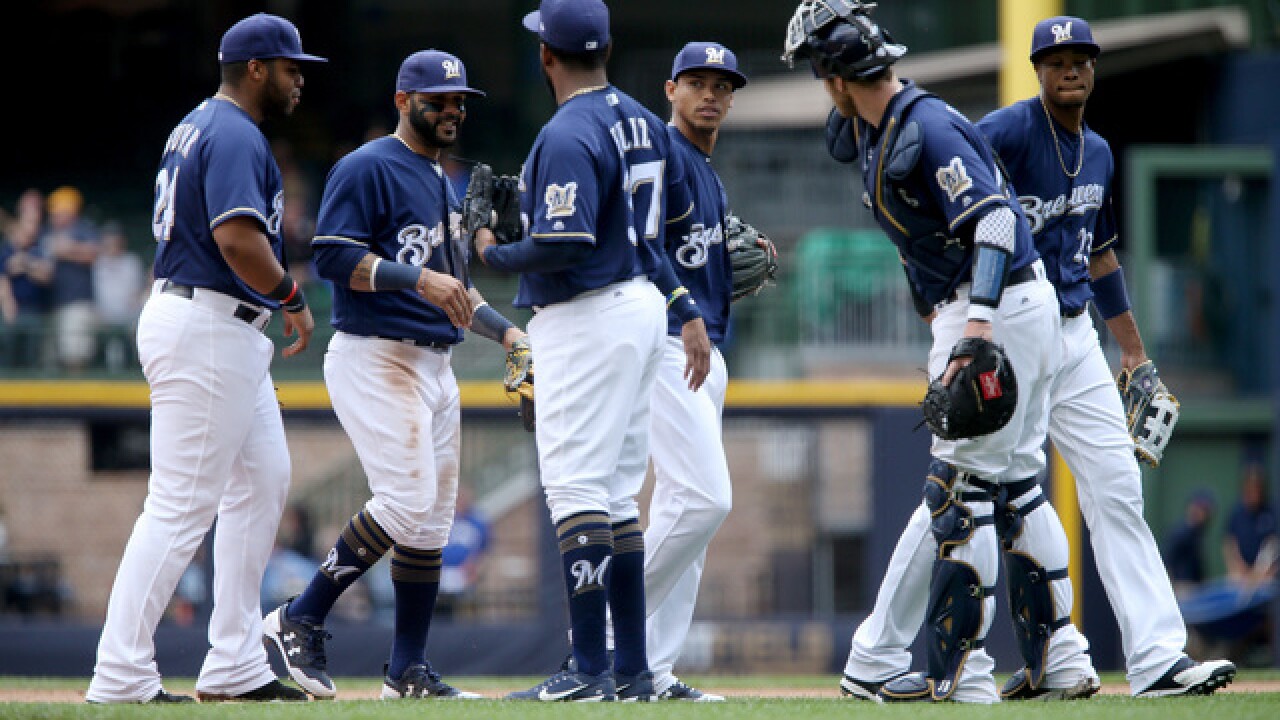 The kooky play came in the fourth inning with the Brewers ahead 1-0 after they loaded the bases with one out.

Interference on the bat boy called and then overturned on the #Mets.. Terry Collins ejected, bases still loaded. I love baseball. pic.twitter.com/oGARDJKDr5

Eric Sogard lofted a popup and Flores gave frantic chase along the railing of Milwaukee's third base dugout. A bat boy carrying a metal stool tried to dodge him and slide past, but nicked Flores' arm and the ball dropped.

Umpires originally called Sogard out for interference but quickly huddled and reversed their ruling. Mets manager Terry Collins bolted from the bench, argued with crew chief Fieldin Culbreth and was ejected.

In the Official Baseball Rules, it is considered unintentional interference -- not an out -- if a bat boy or security or someone else permitted on the field accidently gets in the way of a fielder. Bat boys are provided by the home team, so while this one was wearing a Brewers jersey, he's technically employed by the Mets.

As it turned, the Mets came out OK with Sogard. Given a second chance, the leadoff man who singled his first two times up then grounded into an inning-ending double play.

Anderson (4-1) gave up three hits, walked one and struck out seven. In his previous start, he took a no-hit bid into the eighth inning to beat Arizona.

Corey Knebel pitched the ninth for his fourth save. Flores homered in the eighth on reliever Jacob Barnes' first pitch.

Anderson's odd bunt single off Zack Wheeler (3-3) set up the strange sequence. With two on, he popped up a ball and catcher Travis d'Arnaud quickly corralled it. D'Arnaud appeared to have a play at second base, but held on and threw too late to get Anderson.

Brewers left fielder Nick Franklin threw out Lucas Duda at the plate to end the second as he tried to score from second on d'Arnaud's single. Franklin had an RBI single, right before Anderson's bunt hit.

Hernan Perez hit an RBI double in the Milwaukee third.

The Mr. Met mascot was at the ballpark, greeting fans and shooting T-shirts into the stands. A day before, the person inside the costume was caught on video making an obscene gesture toward a fan. The Mets said the offending employee would not be the mascot again and that someone else filled the role for this game.

Mets: RHP Matt Harvey (4-3, 4.95) faces the Pirates after beating them last Sunday night at PNC Park. He has held opponents hitless in their last 22 at-bats with runners in scoring position.