Richard Overton, America's oldest World War II veteran and the oldest man in the US, dies at 112 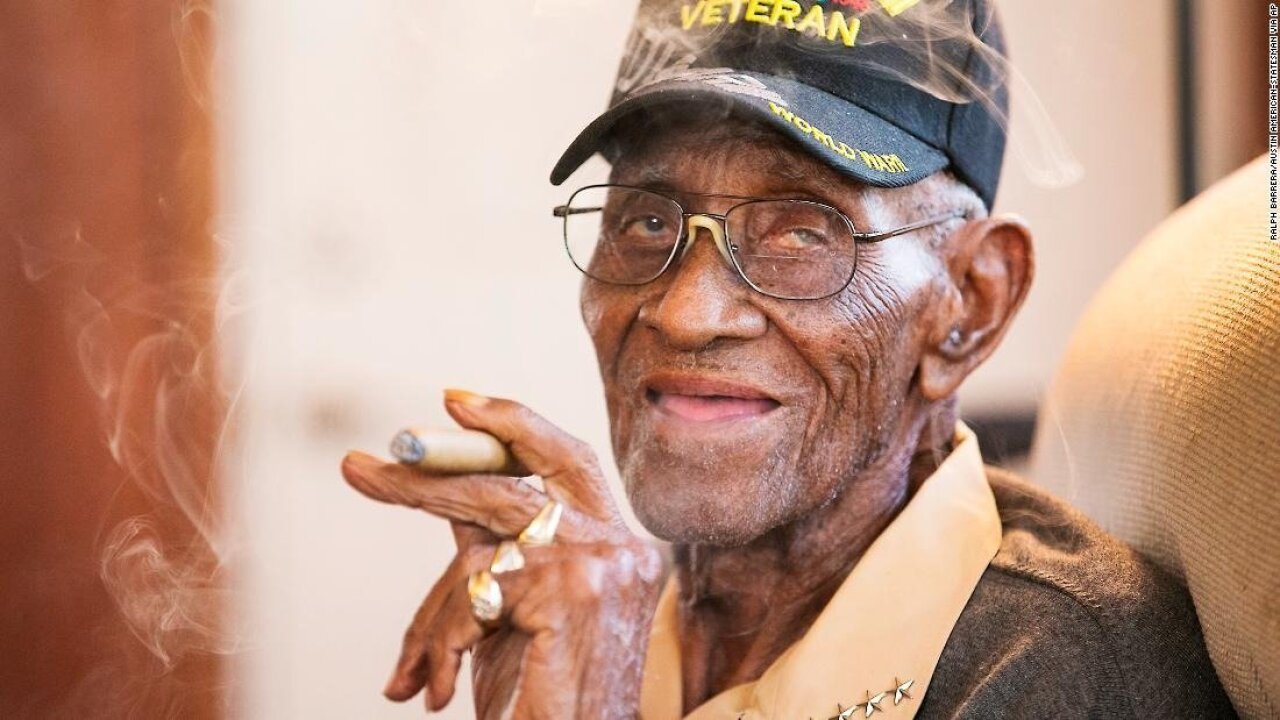 AP/AP
Someone has stolen the identity of the oldest living veteran in America and emptied his bank account. The family of 112-year-old Richard Overton said they don't know how a thief got Overton's social security and personal checking account numbers. Credit: Ralph Barrera/Austin American-Statesman via AP

The death was confirmed to CNN by Shirley Overton, a family member.

The veteran had been hospitalized with pneumonia, his family said.

Overton volunteered for the Army starting in 1942 and served with the 188th Aviation Engineer Battalion, an all-black unit that served on various islands in the Pacific.

"He was there at Pearl Harbor when the battleships were still smoldering. He was there at Okinawa. He was there at Iwo Jima, where he said. 'I only got out of there by the grace of God,'" former President Barack Obama said while honoring Overton at a Veterans Day ceremony at Arlington National Cemetery in 2013.

Overton told CNN at the time he didn't like thinking or talking about the war, saying he "forgot all that stuff."

Overton was a longtime resident of Austin, Texas, according to CNN affiliate KXAN , living on a street -- Richard Overton Avenue -- renamed for him.

He told CNN in 2013 that he credited God for living so long but said he didn't take any medicine and enjoyed his vices.

"I drink whiskey in my coffee. Sometimes I drink it straight," he said when he was 107. "I smoke my cigars, blow the smoke out; I don't swallow it."

In 2015, Overton was the subject of a short documentary titled "Mr. Overton" by Austin-based filmmakers Rocky Conly and Matt Cooper.

He said in the film he loved to eat soup, corn and fish, and drink milk.

"And ice cream. I eat ice cream every night. It makes me happy," he said. Especially butter pecan, he said.

"I still walk, I still talk, and I still drive," Overton said on camera, before hopping into his Ford F100 Custom pickup truck.

Overton also said in the film he liked to go to church and enjoyed the singing. He also loved caring for his cats.

Overton's family and friends celebrated his 112th birthday in May by visiting him at his home, KXAN reported.

"I feel fine every day," KXAN quoted him as telling photographers at the event. "No pain and no aches."

At the party, a friend had made T-shirts to sell to raise support for Overton's around-the-clock at-home care. On them, the secret to longevity Overton reportedly gave TV host and comedian Steve Harvey: "Keep living, don't die."