His name was Charlie and he was a noble mutt. The folks at the Wisconsin Humane Society believed he was a Norwegian Elk Hound. He wasn’t. It didn’t matter. He came into my life at a time when I really needed a friend. Charlie was that until the very end. He saw me through divorce (I still think my ex wanted me to have Charlie because she didn’t want me to be alone when she split), two cross-country moves, and so many adventures I couldn’t possibly chronicle them all here.

Just a few months after I adopted him from the Humane Society’s West Wisconsin Avenue facility, Charlie made it clear he would be my protector. He wasn’t a big dog, 56 pounds at his top weight, but he possessed a ferocity that was at once terrifying and comforting.

He first exhibited that fierceness on a summer morning in 2009. He and I had embarked on an overnight road trip from Milwaukee to the east coast. If I traveled by car, Charlie was usually with me, seated in the front seat, head out the window, slobber spraying along the car’s fuselage. If I ever sell my old Subaru, the new owner will also get oodles of dog hair left behind by my constant, shotgun companion. 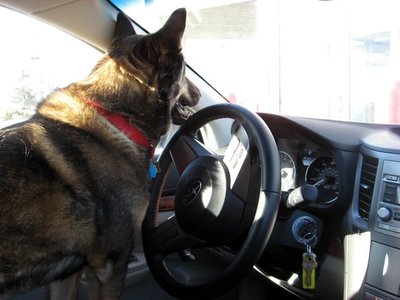 I don’t know if we were in Indiana or Ohio on that dark, humid morning. I only know that I could no longer keep my eyes open and needed a brief, power nap. As a reporter, I learned early to grab sleep when you can and that 20 minutes of shuteye can be enough to power you through another 6 hours of work or driving. So that morning, I did everything my police officer friends advise against. I pulled into a highway rest stop and, with my windows down, reclined my seat and fell dead asleep. My furry sidekick curled up next to me and slept somewhat more alertly.

I know he was alert, because I woke to the sound of him letting out an untamed, brutal bark. A rest stop deplorable had seen my Garmin GPS affixed to the windshield and decided to grab it from the car. He knew I was asleep. He didn’t know Charlie was present and sworn to protect everything in his car. I can still hear the shriek the dolt let out as Charlie sank his teeth into his forearm. The man dropped his loot into my lap as he ran away with Charlie following out the window. Charlie had a firm grip on the desperado’s pants by the time I caught up to them and grabbed my dog.

Roughly four years after that revealing adventure, I became a father. My son, Colton, was born at Columbia St. Mary’s Hospital on the first spring day of 2012. I was more than a little nervous about how my wolf dog might react to the addition of a loud, little baby to our lives. Whatever fears I had, though, were quickly proven unfounded. 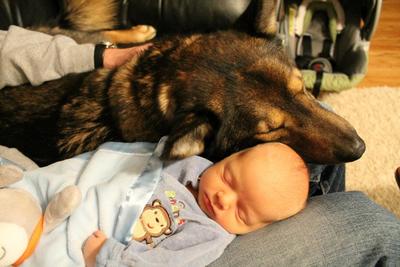 On one of our first nights at home, I had my new baby stretched out on his back in my lap. I watched as Charlie hopped up onto the sofa beside us and laid his head down next to the baby’s. Needless to say, the moment was captured quickly with a cell phone image. Charlie took possession of the child at that moment and was more aggressive about his protective duties regarding Colton than anyone else in my family.

When our family moved to a ten acre farm in the foothills of the Adirondacks, Charlie defended the property against coyotes, wild turkeys, deer and the occasional UPS delivery man. Nobody other than family and a few select neighbors was allowed on the property without being confronted by the irrepressible Charlie. When Colton began to speak, the blue-eyed boy was given to long, earnest discussions beneath the pine trees with his ever-patient pal.

If a coyote dared to show himself along the southern tree line when the boy was outdoors, Charlie would launch himself through the pasture and scrub grass to remove the predator from our property. It would sound awful, the unseen snarling from the woods, but Charlie would eventually return, chest puffed out, with a look of “mission accomplished” playing on his wolf-like face.

As Colton grew older, he counted on Charlie to be his playmate. During the first snowfall of this season, we put Charlie in a harness and attached him to Colton’s snow saucer. The dog dutifully towed his 40 pound charge around the neighborhood to the glee of our neighbors. Whenever the two were separated for any period of time, the reunions became the stuff of viral videos, a round-faced little boy and his much larger, furry friend jumping in ecstatic circles together until you were certain one or both were about to turn inside out. Nobody was ever happier to see Colton than Charlie. 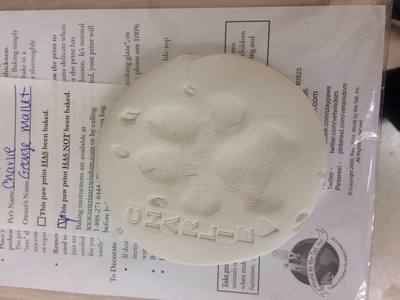 In recent months, Charlie began to slow down. He developed a recurring oral infection that first resulted in the removal of a tooth and some compromised tissue and eventually a clinical diagnosis of cancer. The antibiotics were effective at knocking down the associated infection, but it came back every time. The old boy kept up a determined front, but he was sick and suffering. Thursday afternoon, we said goodbye. In the final moments, a compassionate Dr. Audrey Whang at Shorewood Animal Hospital acted as a comforting psychologist as a sobbing reporter stroked his dog’s still-alert ears and said the words “you are the best boy, Charlie, the best.”

It’s been said that grief is the price we pay for love. Right now, my grief is scorching. I watched my little boy kiss Charlie’s wet nose one last time Wednesday morning in a beautiful and painful moment. I will forever be comforted by the memory of a dog who knew what was important in life: staying in a 4-year-old boy’s bed to keep him company when the child is home from daycare with a nasty cough, finding a warm sun puddle on an April afternoon to sprawl in and loving the people around you fiercely until the very end.