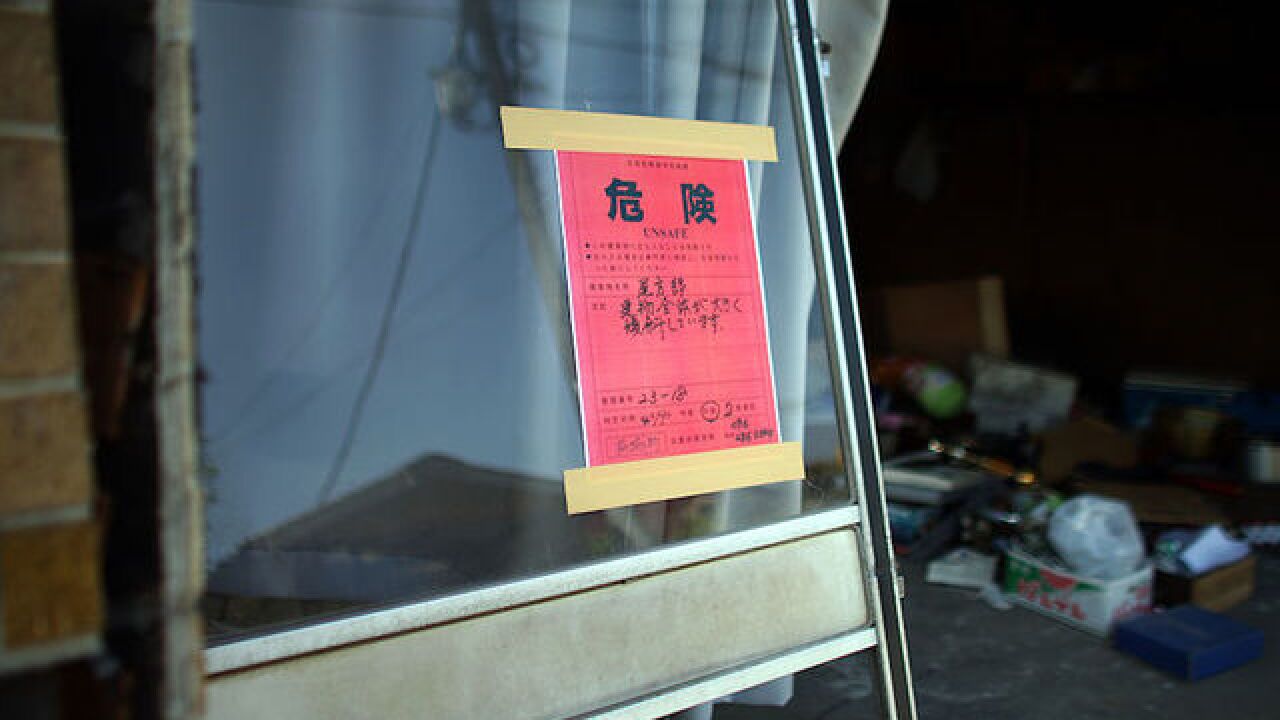 Copyright 2018 Scripps Media, Inc. All rights reserved. This material may not be published, broadcast, rewritten, or redistributed.
Carl Court
<p>An 'unsafe' notice is stuck to the door of a property following an earthquake, on April 20, 2016 in Mashiki near Kumamoto, Japan. </p>

The 5.3 magnitude quake shook Osaka, on Japan's main Honshu Island, around 8 a.m. Monday local time (7 p.m. Sunday ET) according to the US Geological Survey (USGS). The Japan Meteorology Agency put the magnitude at 5.9. It rated the quake at "6 Lower" on its JMA Seismic Intensity scale, meaning the shaking would have been severe enough to make it difficult to remain standing.

A nine-year-old girl was killed after becoming trapped by a damaged wall in a swimming pool facility at her school in Takatsuki city, north of Osaka city.

Two elderly men also died, including an 85-year-old man trapped by a damaged block wall in Yodogawa-ku, and an 80-year-old man who was crushed by a falling bookshelf at his home in Ibaraki.

At least 214 people were hurt, according to Japan's Chief Cabinet Secretary Yoshihide Suga.

The injured were located across a number of prefectures in the south of Honshu island, local officials said.

Kansai Airports, the company which operates the airport in Osaka, says 82 flights departing and arriving there have been canceled throughout the day due to the quake. There's no damage at the airport.

According to Osaka prefectural office, homes in northern Osaka are without water and the supply of gas has been cut to 108,000 households

Some 170,000 homes suffered temporary power outages, which were resolved within hours after the quake, according to Kansai Electric co.

Meantime, on the other side of the Pacific, a 5.6 magnitude quake struck near Guanagazapa in Guatemala's Escuintla province just after 8:30 p.m. local time (10:30 p.m ET) Sunday, according to the USGS.

There were no immediate reports of injuries or serious damage, according to CONRED, the government agency for disaster reduction.

Both Japan and Guatemala are situated on the Ring of Fire, an area of intense seismic and volcanic activity on both sides of the Pacific Ocean.

The 40,000-kilometer (25,000-mile) area stretches from the boundary of the Pacific Plate and the smaller plates such as the Philippine Sea plate to the Cocos and Nazca Plates that line the edge of the Pacific Ocean in a horseshoe shape.