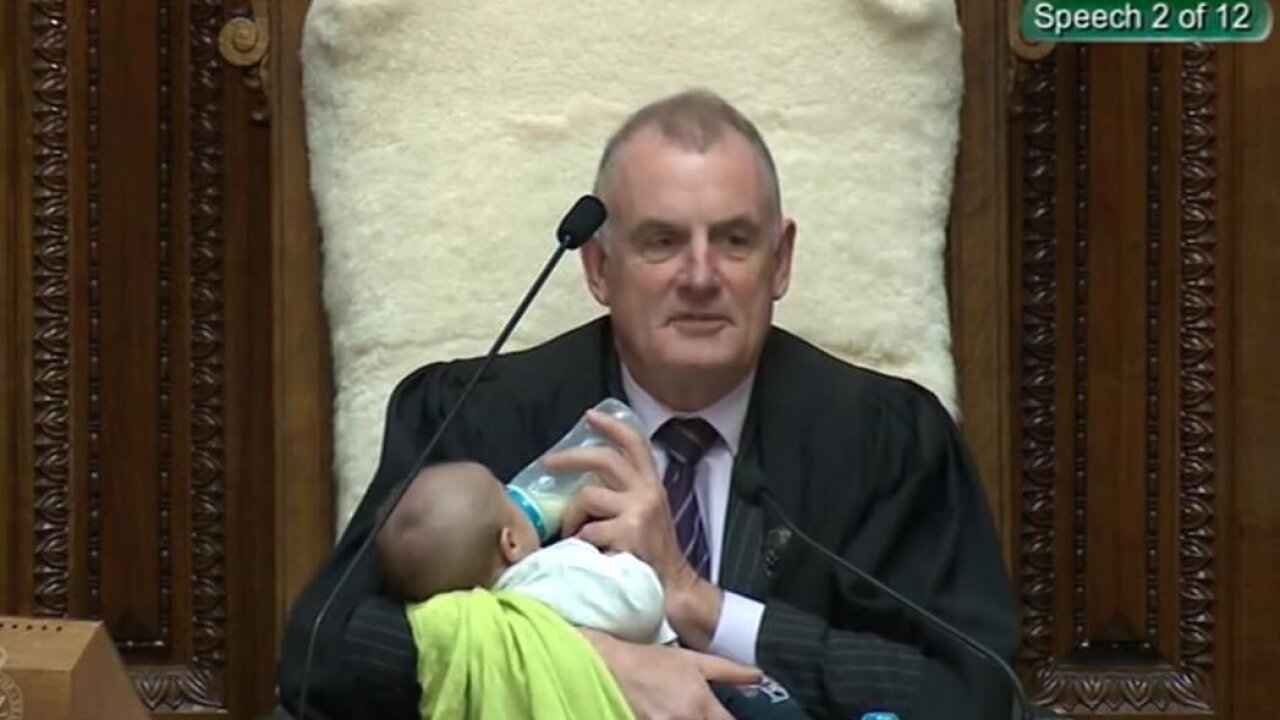 The New Zealand Parliament invited a special guest onto the chamber floor Wednesday -- a newborn baby.

The country's parliamentary speaker Trevor Mallard held and fed the one-month-old son of lawmaker Tāmati Coffey while presiding over a debate.

"Normally the speaker's chair is only used by presiding officers but today a VIP took the chair with me," Mallard tweeted, along with a photo of him bottle-feeding the baby, whose father had just returned from paternity leave and was sat close by.

Videos show Mallard rocking the baby as he listened to the debate. At one point, he warns a lawmaker that their time had run out, followed by a gurgle of agreement from the baby.

People on social media were quick to praise Mallard and Coffey. "Thank you for normalizing the family unit," one person tweeted in response to Mallard's photo. "We need to see more of this. Work places need to adapt to enable this behavior."

Another Twitter user said : "New Zealand...you might be a small country, but you have a huge lesson to teach the world!"

Many lawmakers were just as supportive. Gareth Hughes, a Green Party parliamentary member, posted a photo of Mallard holding up and smiling at the baby. "Lovely to have a baby in the House, and what a beautiful one," Hughes tweeted.

Last year, New Zealand Prime Minister Jacinda Ardern made history becoming the first world leader in nearly 30 years to have a child while in office. She later returned to her job, while her partner, Clarke Gayford, became a stay-at-home dad.

She continued to make headlines when she and Gayford brought their baby to the United Nations assembly hall last September. Ardern said it was a "practical decision," according to CNN affiliate Radio New Zealand .

Bringing babies into government buildings may still be unusual in many countries, and outright forbidden in others -- an elected representative in Kenya who brought her baby into the debating chamber was reportedly forced to leave earlier this month. Images shared online showed Zuelekha Hassan Juma being ejected from the floor of the National Assembly while cradling her child.

But several other more positive cases suggest attitudes may be changing elsewhere -- British lawmaker Jo Swinson brought her baby to a parliamentary debate last September, while Australian legislator Larissa Waters breastfed her daughter while in Parliament in 2017.