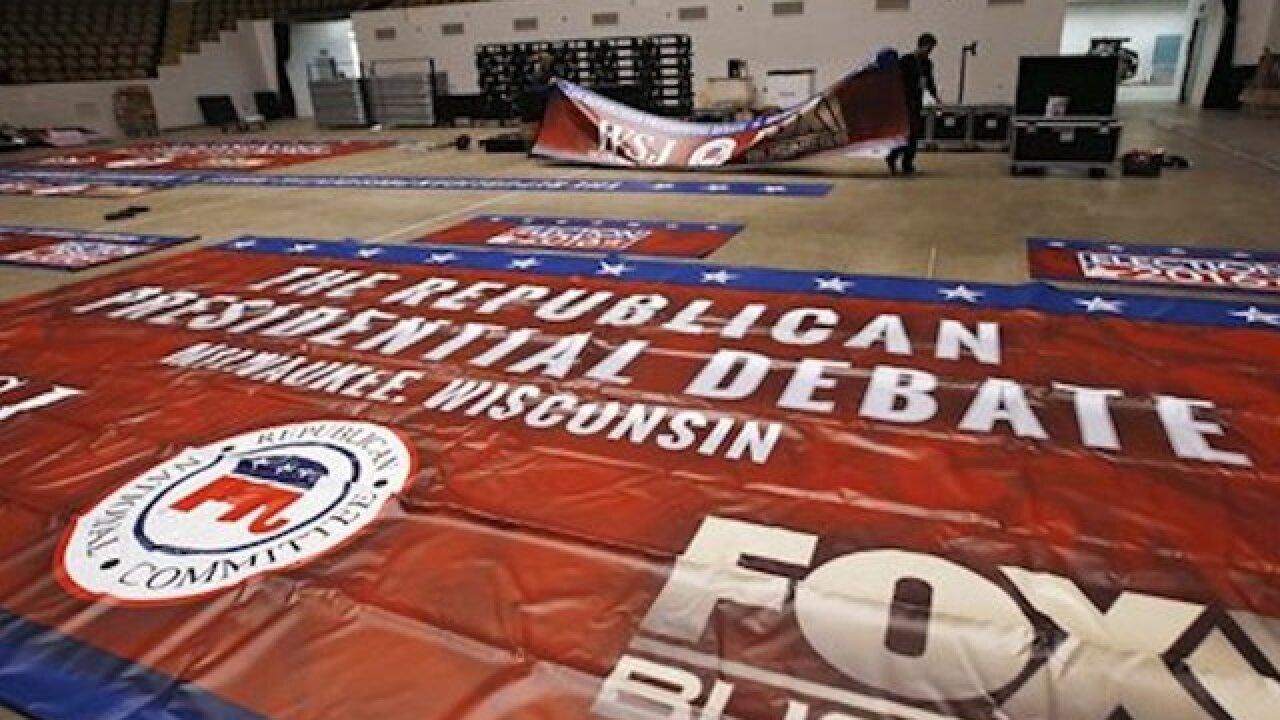 MILWAUKEE (AP) — Organizers are promising to focus on substance when eight Republicans face off on the main stage for the GOP's fourth presidential debate.

While that's the plan, big personalities and rising tensions in the unsettled 2016 field could make for an unpredictable Tuesday evening in Milwaukee. Donald Trump and Ben Carson are fighting to maintain their places atop the polls, while others — including Jeb Bush — are fighting for their political survival in the 9 p.m. EST event.

With the fewest people on stage so far this Republican primary season, the candidates will get more time to make their individual cases and distinguish themselves from their rivals.

Some things to look for in the two-hour debate:

Debate host Fox Business Network is promising to focus on substantive issues, a response to those who accused last month's CNBC debate of focusing too much on politics and "gotcha" questions. Some candidates should be careful what they ask for. A substantive debate on detailed policy could present challenges for outsider candidates Ben Carson and Donald Trump. The pair is leading most polls largely based on the strength of their personalities, not their command of public policy. Carson, a retired neurosurgeon, has sometimes struggled when challenged to explain his prescriptions for the nation's problems. A more focused debate could help the experienced candidates stand out. But with Trump in the middle of the stage, it remains to be seen whether organizers can keep politics and personalities from dominating the night.

CAN JEB FIX IT?

The last debate was a disaster for Jeb Bush, whose attack on rival Marco Rubio backfired and thrust his anemic candidacy into crisis mode. He launched a so-called comeback tour days later in a bus emblazoned with the unintentionally ironic slogan, "Jeb can fix it." Based on his performance in the first three debates, the former Florida governor has a lot to fix. He has struggled to be aggressive in previous debates and failed to stand out on policy, which should be his strength. The self-described introvert may never dominate in a debate of big personalities, but he'll need to avoid another disaster if he expects to rescue his campaign. He can't fix it all at once with a strong performance Tuesday, but he can give his comeback some badly needed momentum.

Ben Carson has faced a firestorm of controversy in recent days over questions about his background. Among them, his claim of a scholarship offer to the United States Military Academy at West Point despite having never applied. Carson's supporters have rallied around him in recent days and blamed the media for his troubles. And Carson's campaign says the scrutiny has energized him as never before. It's also pushed him to change his strategy. Aides say he's planning to defend himself far more aggressively than he has in the first three meetings. It's unclear, however, whether the soft-spoken Carson can play the aggressor on a stage with more aggressive opponents. His bigger challenge Tuesday night could be policy. As a former neurosurgeon, Carson has little background with key issues such as economics, foreign policy, Social Security or national security.

Marco Rubio emerged from the last debate as one of the clear winners, yet questions remain about his ability to build upon his newfound momentum. Look for his opponents to do everything they can to stop him. Both Jeb Bush and Donald Trump have identified Rubio as their chief rival. Trump in particular has intensified attacks in recent days, calling Rubio "a lightweight choker" and "a highly overrated politician" in a series of tweets on the eve of the debate. Rubio won a pointed exchange with Bush in the last meeting, but the target on his back is growing. To become a winner Tuesday night, he'll have to respond to direct attacks from Trump, a far more skilled showman than Bush.

A quiet consensus is emerging among many Republicans that Ted Cruz is poised to become a major player in the 2016 contest. The freshman senator scored points in the last debate by lashing out at the moderators. But media bashing alone won't give Cruz a path to his party's nomination. Cruz is courting the same bloc of voters now leaning toward Donald Trump and Ben Carson. To truly emerge as a top-tier candidate, he needs one of the two — if not both — to fall. Cruz has so far resisted attacking them publicly. With just two debates remaining before the Iowa caucuses, the Texas senator doesn't have much time to make his move. Watch to see whether he continues to play nice or begins to distinguish himself from his outsider rivals.