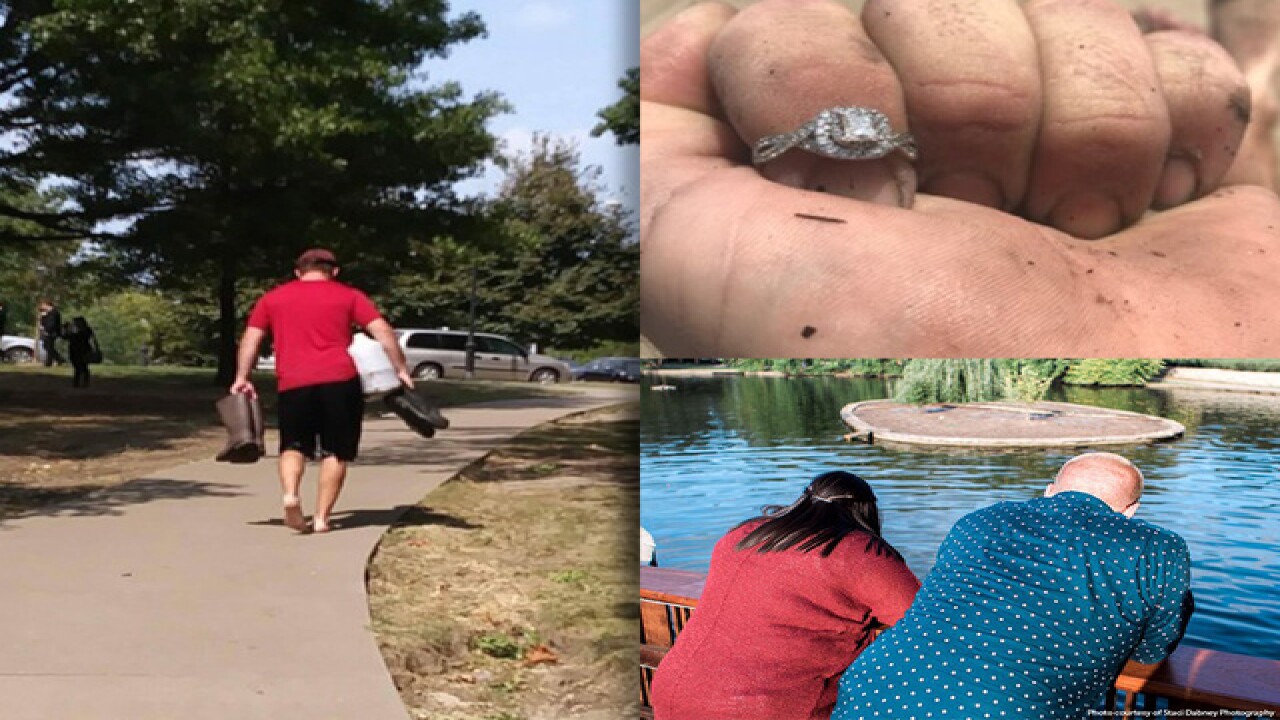 KANSAS CITY, Mo. – Last week, a Kansas City couple’s special day took a horrifying turn when the groom-to-be accidentally dropped the ring he was in the process of proposing with into the water beneath the picturesque bridge he and his bride-to-be were on.

Seth Dixon and Ruth Salas’ friends got into the pond at Loose Park to find the lost gem, but their search was unsuccessful.

Giving up hope of finding the wedding ring, the couple searched for a way to replace it. A friend started a GoFundMe page after video of the incident went viral, and the couple was eventually invited onto 'Jimmy Kimmel Live' for a do-over, complete with a custom-built set made to look like Loose Park and a brand new ring.

Little did they know, hundreds of miles away, back home in Kansas City, a complete stranger had taken it upon himself to find their precious lost treasure.

“I wanted to make sure they got it back before somebody else found it and had the opportunity to not give it back,” Michael Long said.

Long lives in Springfield, Missouri, and made the 170-mile trek to Loose Park three different times to make sure Dixon and Salas got their ring back.

He said he was scrolling through Facebook one day when he came across the viral video. Knowing he had the ability to find the ring, he went to search the water.

Long dove for the first time on Thursday. He searched using only a metal detector and no scuba gear, bobbing up for air and back down to the pond floor for an hour and a half before calling it quits for the night. But he didn't give up.

Long came back on Saturday, and this time searched for three hours until he finally pulled the diamond from the pond. Long searched the pond at Loose Park to make sure Dixon and Salas got their ring back.

Long said he contacted a friend of the couple about 20 minutes after his discovery and made arrangements to get the ring back to Dixon and Salas as soon as possible.

The couple finally got their ring back on Tuesday, thanks to Long.

He said he felt compelled to help in the situation even though he didn’t know those involved personally because he wanted everyone to know that there are still good people out in the world.

He also said he wanted there to be peace of mind that the couple got their ring back rather than someone stealing it or it remaining lost.

Long’s other finds from his dives? A few nails and a yellow toy car.