Son of slain Louisiana man speaks out for first time 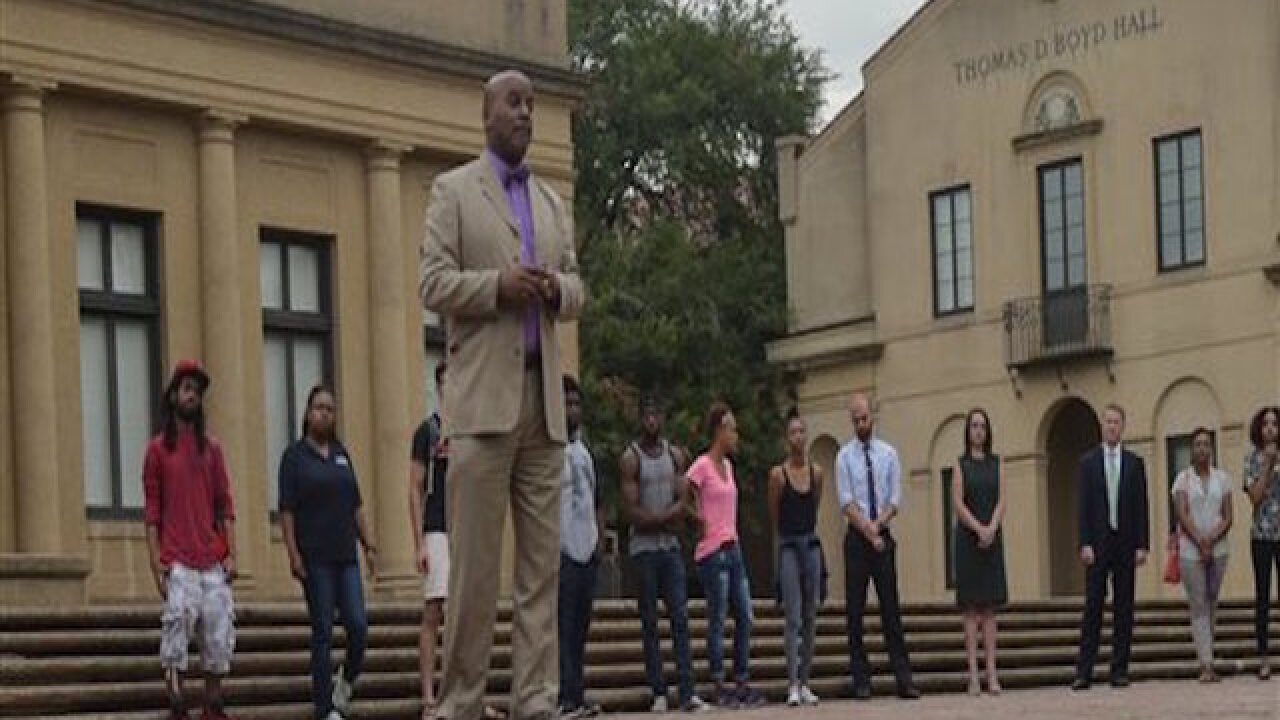 BATON ROUGE, La. (AP) — The 15-year-old son of a black man shot and killed by Louisiana police spoke out for the first time Wednesday, calling his father a good man and asking people not to resort to violence after Alton Sterling's death.

"I feel that people in general, not matter what their race is, should come together as one united family," Cameron Sterling told reporters gathered outside the convenience store in Baton Rogue where his father died last week.

"I truly feel that my father was a good man, and he will always be a good man," the teenager said.

Cameron Sterling, who just last week had broken down in sobs and had to be led away as his mother talked about his father's death, on Wednesday appeared composed as he urged people to "be together, not apart."

He thanked supporters and urged protesters to remain peaceful. "Yes, you can protest, but I want everyone to protest the right way," he said. "Protest in peace, not guns, not drugs, not alcohol, not violence."

Justin Bamberg, an attorney for Cameron and his mother, Quinyetta McMillon, said "All Cameron is looking for is change, progress and justice." He added later, "We want justice; we want an indictment."

The son's comments followed the arrests of three suspects in an alleged plot that authorities are calling a "substantial, credible threat" to police. They said Tuesday that the three, and possibly a fourth person, are accused of stealing at least eight handguns in a plan to harm police officers in the Baton Rouge area.

The arrests in Louisiana's capital city come amid heightened tensions following the deadly police shootings of black men in Baton Rouge and Minnesota and the killings of five police officers in Dallas last week.

The chief said the first suspect arrested told police that "the reason the burglary was being done was to harm police officers." He said the suspect didn't give any details about when or where a possible plot would be carried out.

All of the suspects are from Baton Rouge and all are black. They face charges including burglary, simple burglary, and theft of a firearm; they have not been arrested on any charges related to plotting to kill police.

Six of the eight stolen firearms have been recovered and two are still at large, authorities said.

"We have been questioned repeatedly over the last several days about our show of force and why we have the tactics that we have. Well, this is the reason, because we had credible threats against the lives of law enforcement in this city," Dabadie said.

In a statement, police said surveillance video showed the suspects using a ladder to climb the roof of the building to get in early Saturday. Eight handguns and one airsoft BB gun were missing from the store.

Authorities said they arrested one suspect — Antonio Thomas, 17 — at the scene with a handgun and a BB gun. Another suspect, Malik Bridgewater, 20, was apprehended Sunday and a third suspect — a 13-year-old boy — was apprehended on a street. They called on a fourth suspect to turn himself in. Another man was arrested for allegedly purchasing two of the stolen guns, but he hasn't been linked to the alleged plot, a police spokesman said.

It wasn't immediately known if those arrested had attorneys.

In the first few days after 37-year-old Alton Sterling was shot and killed after being pinned down by two white police officers in Baton Rouge, police took a reserved approach to enforcement, keeping a low profile as hundreds gathered outside the convenience store where Sterling died.

But tensions escalated during weekend protests that moved away from the store and into other parts of the city, marked by a show of force by law enforcement that included police wielding batons, carrying long guns and wearing shields. Over a three-day period, police arrested about 200 protesters and came under criticism for the tactics used to deal with the demonstrations.

"We've had a police officer with teeth knocked out of his face because of a rock. If you don't have on riot gear, you have no defense against that sort of thing," the Democratic governor said.