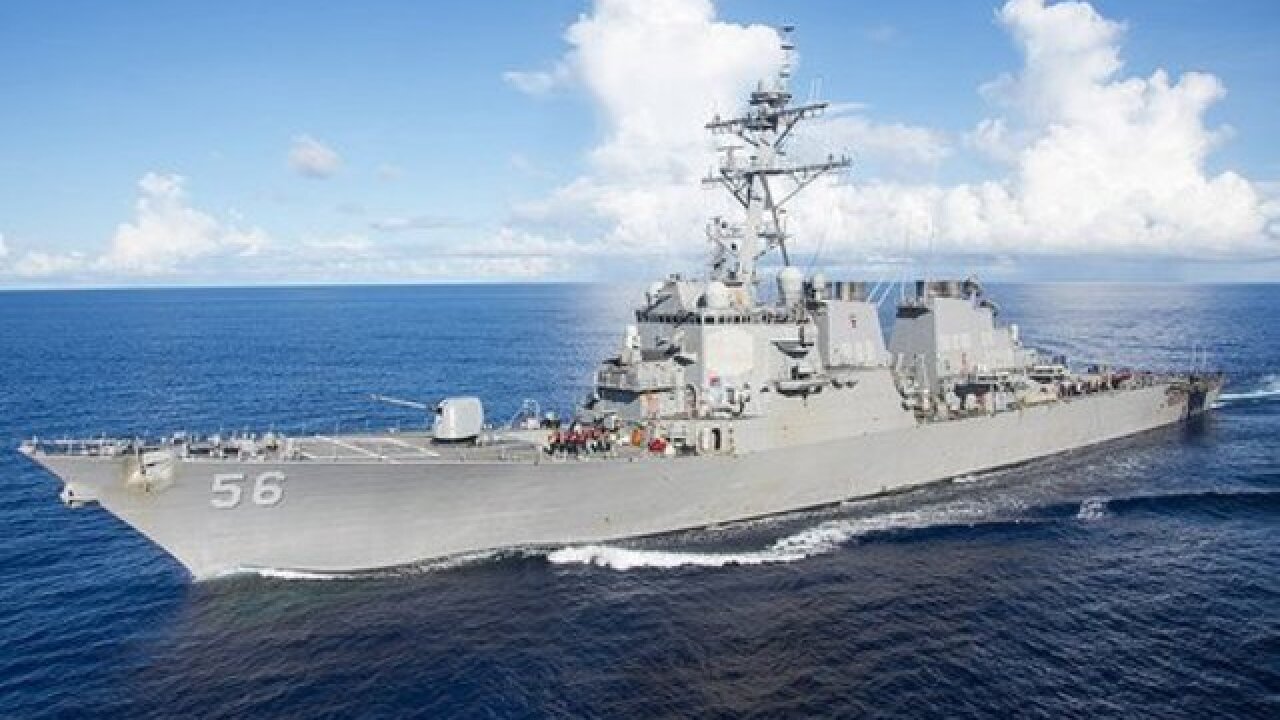 (CNN) -- Japan's Ministry of Defense has expanded its search to find five missing US Marines after two aircraft with seven crew collided mid-air and crashed into the sea Thursday.

While a Ministry of Defense spokesperson could not disclose details of the search area, they told CNN that it was widened to account for ocean currents.

Initial rescue efforts had been complicated by storms and sustained winds of 30 to 40 mph. Japan's Ministry of Defense said it was still raining in the area where the planes are believed to have crashed Friday morning, but conditions were good enough to continue search operations.

One Marine was rescued and was "in fair condition" Thursday, while the body of a second has been "declared deceased," the US Marine Corps said in a statement.

The two planes -- a KC-130 and F/A-18 -- collided at 1:42 a.m. local time about 200 miles (320 kilometers) off the coast of Japan during an aerial refueling that was part of routine training, according to the statement. The primary mission of a KC-130 is airborne refueling.

The planes "had launched from Marine Corps Air Station Iwakuni and were conducting regularly scheduled training when the mishap occurred," according to a statement from the US Marine Corps.

The cause of the crash is under investigation.

On Friday, the US 7th Fleet said it was supporting ongoing search and rescue efforts with a Navy P-8A Maritime Patrol and Reconnaissance Aircraft flying out of Kadena Air Force Base on the island of Okinawa.

Three patrol planes and three vessels from Japan's Self Defense Force as well as six patrol ships and two fixed-wing airplanes from the Coast Guard have joined the search.

The F/A-18 fighter jet involved in Thursday's crash has room for a crew of two, usually a pilot and an electronic warfare officer operating weapons, tracking and jamming systems. While a fighter crew can quickly eject from their plane by blowing the plane's canopy, it's more difficult for a tanker crew to do so.

The KC-130 tanker aircraft that was also involved in the collision is capable of refueling planes and helicopters while airborne using what is called a "hose and drogue" system. The drogue looks like a basket attached to the end of a long hose, and one extends from each wing of the KC-130.

It's the job of the fighter pilot to guide the port on the F/A-18 into the tanker's basket, but both planes need to maintain the same airspeed and level flight during the transfer. Turbulence, both from the KC-130's propellers and wings as well as from weather conditions, can affect the planes.

The accident off Japan occurred in the dark, when depth perception becomes more difficult for a pilot. But nighttime refuelings are not uncommon and the pilots train in those conditions as such operations may be necessary during battle situations.

The two planes belonged to the US Marine Corps, assigned to the 1st Marine Aircraft Wing, III Marine Expeditionary Force.

While the cause of Thursday's crash is under investigation, it comes a year after a spate of incidents -- most involving ships assigned to the US 7th Fleet -- that included the deaths of 17 sailors.

In August 2017, Vice Adm. Joseph Aucoin was relieved of his duty as the commander of 7th Fleet following a deadly collision between the destroyer USS John S. McCain and a merchant ship off Singapore that left 10 US sailors dead.

In June the same year, the guided-missile destroyer USS Fitzgerald, also of the 7th Fleet, collided with a cargo ship off Japan, killing seven US sailors.

Those two fatal collisions were "avoidable" and "numerous failures occurred on the part of leadership," a Navy report concluded November last year.

Appearing before the House Armed Services Committee as part of an investigation into the series of fatal crashes and collisions at sea, the Navy's No. 2 officer, Vice Chief of Naval Operations Adm. William Moran, said the Navy was trying to do too much with too little.

"We continue to have a supply-and-demand problem which is placing a heavy strain on the force," said Moran. "All of these things culminate with this notion we aren't big enough to do everything we're being tasked to do."

Surveys of sailors aboard the Japan-based guided-missile cruiser USS Shiloh carried out between June 2015 and August 2017 pointed to severe morale problems.

One sailor described serving aboard the ship as being akin to being on "a floating prison," according to surveys obtained via the Freedom of Information Act by Navy Times.

In the wake of the incidents, the US Navy began reevaluating its operations and included efforts to improve conditions for sailors and personnel, according to the Navy Times in April.

Still, accidents have continued. Most recently, a US Navy helicopter crashed onto the flight deck of the aircraft carrier the USS Ronald Reagan in the Philippine Sea in October, injuring 12 personnel on board.

An earlier version of this story misidentified which branch of the US military the aircraft belonged to. This has been corrected.