Pokemon Go appears to be the new hottest dating app.

Much has been made about the social aspect of the new game that was released just one week ago. The game has reportedly led to new friendships and huge gatherings at local parks and other locations.

It should come as no surprise then that many players are using the game in some way to meet potential mates.

It wasn't long though before personal ads began appearing on local Craigslists and players began commenting on being asked for dates while looking for Pikachu. 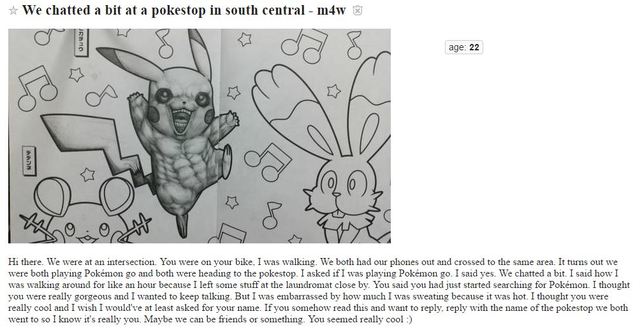 I just got asked on a Pokémon catching date, men take note

the guy at Taco Bell asked me out on a date by saying "Will you Pokemon GO OUT WITH ME?" after I said I was Team Mystic

According to an article in GQ, a 31-year-old woman told GQ that she had just met her "soulmate" while pursuing a rare Pokemon in her office building.

A professor of digital social media at USC Enneberg School told Wired.com: "It's perfect as a dating game. You meet someone with a common interest, engage in that activity together, and get a new challenge for tomorrow and the next day."

But not everyone seems to be interested in finding potential mates. Some people are just looking for a date for the evening, including this guy in Arizona. And it is those types of ads and etc. that have spurned a new saying similar to "Netflix and chill." It is "Pokemon Go and blow."

Whether or not Pokemon Go eclipses Tinder (or any of the other popular dating apps) as the best way to meet a potential date remains to be seen. However, according to Mashable, Android users have already downloaded Pokemon Go more times than they have downloaded Tinder.

On the flip side of the coin, Pokemon Go is already being blamed relationship troubles.

Hey #PokemonGo - thanks for stealing my boyfriend. I HOPE YOU'RE VERY HAPPY TOGETHER.
?? pic.twitter.com/vjZbm2Mdfk

My bf decided to 'go for a walk' so now I'm just another #PokemonGO widow sitting home alone on Sunday night.

True Life: I Lost My Boyfriend to Pokemon Go.

The true effect of Pokemon Go on relationships remains to be seen. There is no doubt though that people are meeting people they may have never met before due to the highly social nature of the game.