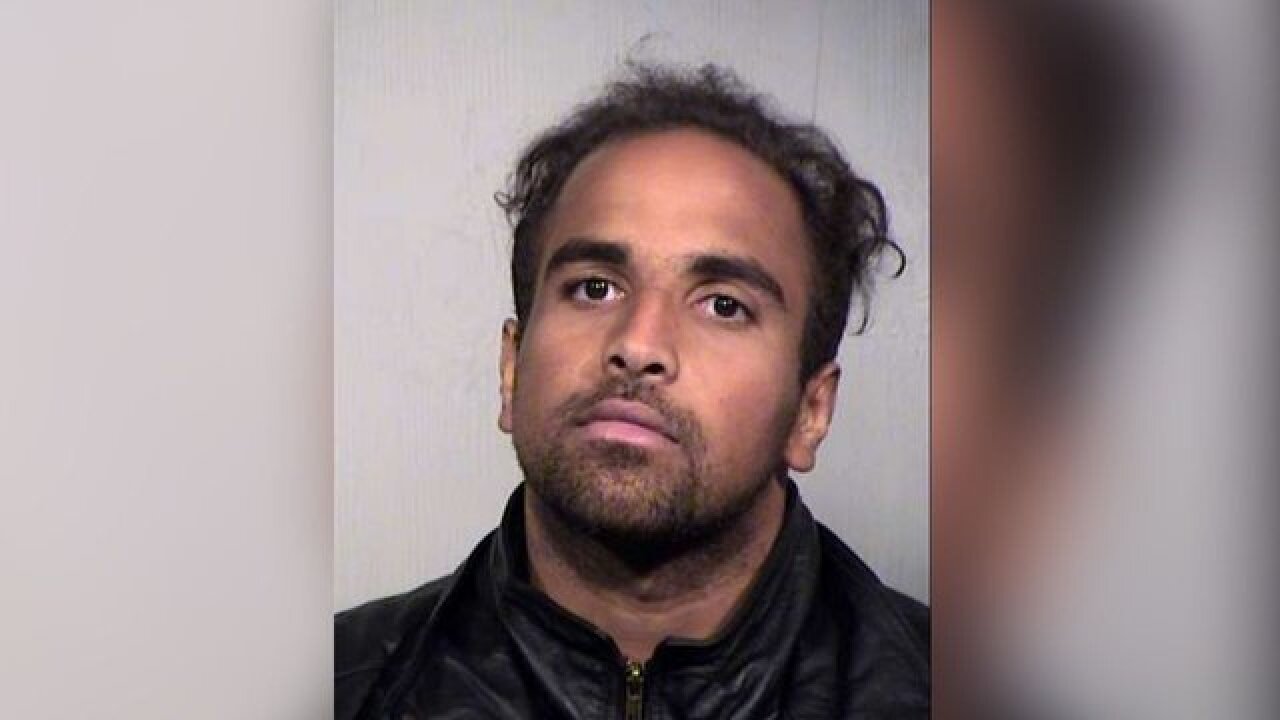 © 2018 Cable News Network, Inc.
MCSO
<p>Embargoed to Phoenix, AZ Andre Sutherland, 27, told officers that he went to the apartment because he thought it was "haunted and abandoned."</p>

Phoenix, AZ (KPHO) -- A 13-year-old boy discovered a stranger in his bedroom fondling himself and punched the man in the face, according to court documents.

The incident occurred Dec. 2 at an apartment complex near the area of 40th Street and Cactus Road.

The teen told officers he went to the kitchen to make some pizza around 7 p.m. When he returned to his bedroom, he found a man lying in his bed and touching himself inappropriately.

The suspect, identified as 27-year-old Andre Marc Sutherland, was on meth at the time and entered through an unlocked sliding glass door, according to court documents.

After the punch, Sutherland and the boy got into a scuffle. The man eventually left. The teen locked himself in a bathroom and called his father and 911.

The boy's father said he got the call from his son while at work in the West Valley.

"As soon as he said it, I kinda didn't believe it," said the boy's father in an interview. "He said, 'Oh, there was a break in and he tried to choke me' was all he said. 'I'm locking myself in the bathroom.'"

The boy was able to provide police with a description of the intruder, who he said he had never met before. Investigators quickly found Sutherland in a greenbelt adjacent to the family's apartment complex.

"I don't think anybody could have done any better than what he's done," the boy's father said. "He reacted perfectly in a situation where you couldn't really tell what way it was going to go."

When police interviewed Sutherland, he told officers he was looking for a place to sleep and that he had been using meth for the past month.

Sutherland admitted that he jumped over a wall and came into the apartment because he thought the place looked "haunted and abandoned," according to court documents. Sutherland told officers he fondled himself as a way to "draw the spirits in."

The 27-year-old said he was surprised the teenager punched him in the face because he thought he was "having a telepathic conversation" with the boy.

The boy's father said he and his son have discussed ways in which the teen should react to emergencies while he's away at work, "but nothing that can really prepare you for this kind of situation."

"He certainly exceeded my expectations. I'm very proud of him," the father said.

Please note: This content carries a strict local market embargo. If you share the same market as the contributor of this article, you may not use it on any platform.