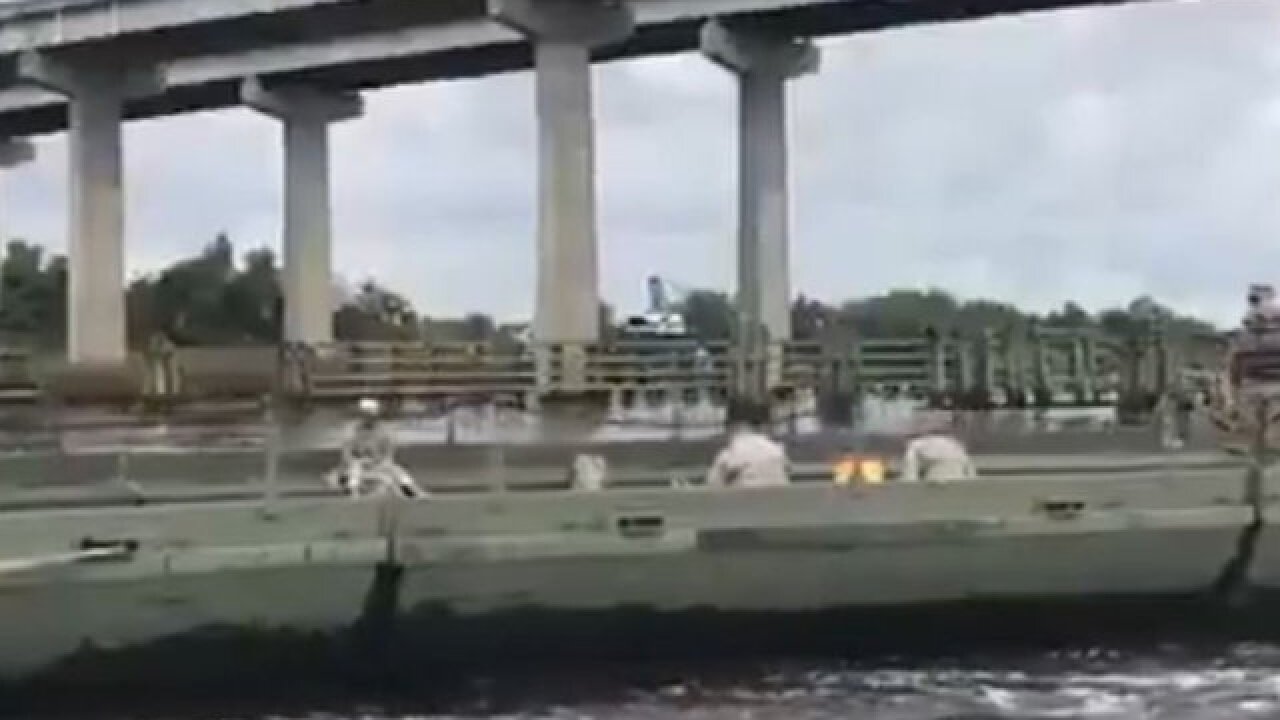 A nervous Jacklyn Valentine twice checked on her single-story home Wednesday in the final South Carolina community in the path of Hurricane Florence's lingering floodwaters.

"We're just kind of waiting," Valentine told HLN after evacuating her Georgetown County home. "We really don't know where to go or what to do."

For the thousands of residents urged to evacuate ahead of historic flooding in an area where multiple swollen rivers converge, the waiting and uncertainty continues nearly two weeks after Hurricane Florence's arrival.

Still, the possibility of at least 10 feet of flooding in the worst areas of Georgetown County was somewhat tempered by a revised forecast Wednesday of 2 to 4 feet even as Georgetown Mayor Brendon Barber warned residents to not lower their guard against a slow-moving disaster he likened to a "silent assassin."

The county, which dodged the brunt of then-Hurricane Florence's ferocious winds, sits at the mouths of the Waccamaw, Great Pee Dee and Sampit rivers.

The Great Pee Dee and the larger Waccamaw River had swollen to record levels upstream -- as demonstrated by flooding 40 miles north in and around Conway, where the Waccamaw was still rising -- and that water was headed downstream at historic levels.

But the water was moving at a slower rate than previously indicated and spreading with a less vertical rise, County Administrator Sel Hemingway told reporters. He warned that the flooding levels could change.

"I do want to caution while we're optimistic that things are looking better to some degree ... we want you to be fully aware that there will be some areas that you'll see increased levels of water that you have not seen previously. ... The awareness level needs to be elevated."

The Great Pee Dee and the Waccamaw are now expected to crest Friday or Saturday.

On Wednesday, the Federal Emergency Management Agency said Georgetown County residents will be eligible for the agency's individual assistance program.

"A lot of the country thinks that Florence came and went, but unfortunately a lot of that water, it takes weeks for it to process down and the real frustrating part for the citizens impacted is they're not going to be able to go home into these isolated communities for a matter of weeks," FEMA Administrator Brock Long said.

Valentine left her home in Georgetown to stay with a daughter. She said up to 10 feet of water was expected around her home, essentially covering the first floor.

She twice left her daughter's home on Wednesday to check on her house.

"Right now, the water is moving slowly," she said. "This afternoon it's up a little bit higher, not much but we still haven't really seen the effects of the water coming in yet fully. Some of the streets are closed. It's just a waiting game."

Georgetown has a population of roughly 9,000 people.

The state Department of Health and Environmental Control announced Wednesday that some shellfish harvesting beds in Georgetown County, from North Inlet south to the South Santee River, had been closed because of flooding.

"The affected area will reopen once water quality data indicate that bacteria levels are once again suitable for shellfish harvesting," Mike Pearson, manager of DHEC's shellfish sanitation section, said in a statement.

Preparations for the flooding come weeks after Florence made landfall and pummeled the Carolinas with wind and rain.

On Monday, the death toll from the storm rose to 47 after North Carolina Gov. Roy Cooper's office said three more deaths had been confirmed in that state.

The rainfall that Florence dumped on North Carolina has been crawling downriver for more than two weeks. It now threatens to inundate the homes and businesses owned by Georgetown County's more than 61,000 people -- almost 8,000 of whom were urged to evacuate.

A significant portion of the city of Georgetown is expected to be under water.

Critical infrastructure is already being prepared and hardened. Along Highway 17, which connects Georgetown to the nearby South Carolina coast and its beaches, flood barriers were erected.

South Carolina Transportation Secretary Christy Hall said the agency used aquadams along portions of Highway 17 and other areas to keep water off the road and keep the highway open as long as possible. But officials believe it will need to close at some point.

Officials worry the flooding could wash away the portion of the highway that links the bridges spanning the Great Pee Dee and Waccamaw rivers.

As a precaution, the South Carolina National Guard built a floating ribbon bridge, capable of carrying heavy equipment, across the Waccamaw River.

Experts have arrived to monitor the flooding and keep an eye on the bridges, Deputy Secretary of Engineering for the Department of Transportation Leland Colvin said. The bridges won't reopen until they've been inspected after the flooding.

The US Army Corps of Engineers is also on location, ready to respond, help and offer support in whatever way the state or FEMA ask, according to Brig. Gen. Diana Holland, commander of the Army Corps South Atlantic Division.

"We know there will be a significant rise in the rivers, where they converge here," she said. "We'll just have to see."

The Georgetown County Water and Sewer District also scrambled to prepare. The Waccamaw River, which supplies drinking water for the county, will soon contain dangerous pollutants from the floodwater.

Ray Gagnon, executive director of the water district, told reporters that the district was working to protect all of its facilities in the "inundation zone," and preparing other sources of water, including aquifers, recovery wells, groundwater wells and the county's interconnect with the nearby Grand Strand Water and Sewer Authority.

Sandbags are also being distributed -- up to 10 per household -- but the county warned on its Facebook page, "Keep in mind that sandbags will not seal out water."

At Graham's Landing on Front, a restaurant in Georgetown, part-owner Robert Maring said Tuesday that the community had spent weeks on edge expecting Florence's arrival and now the threat of major flooding.

"It's like being stalked by a turtle," he said, as workers used sandbags and sheets of plastic to guard the business against rising waters.

Graham Plummer, another owner of Graham's Landing, told CNN affiliate WBTW, "You know, it's a bunch of money opening up and now we're not getting to sell anything. We've had to close for two of the five weeks we've been open."