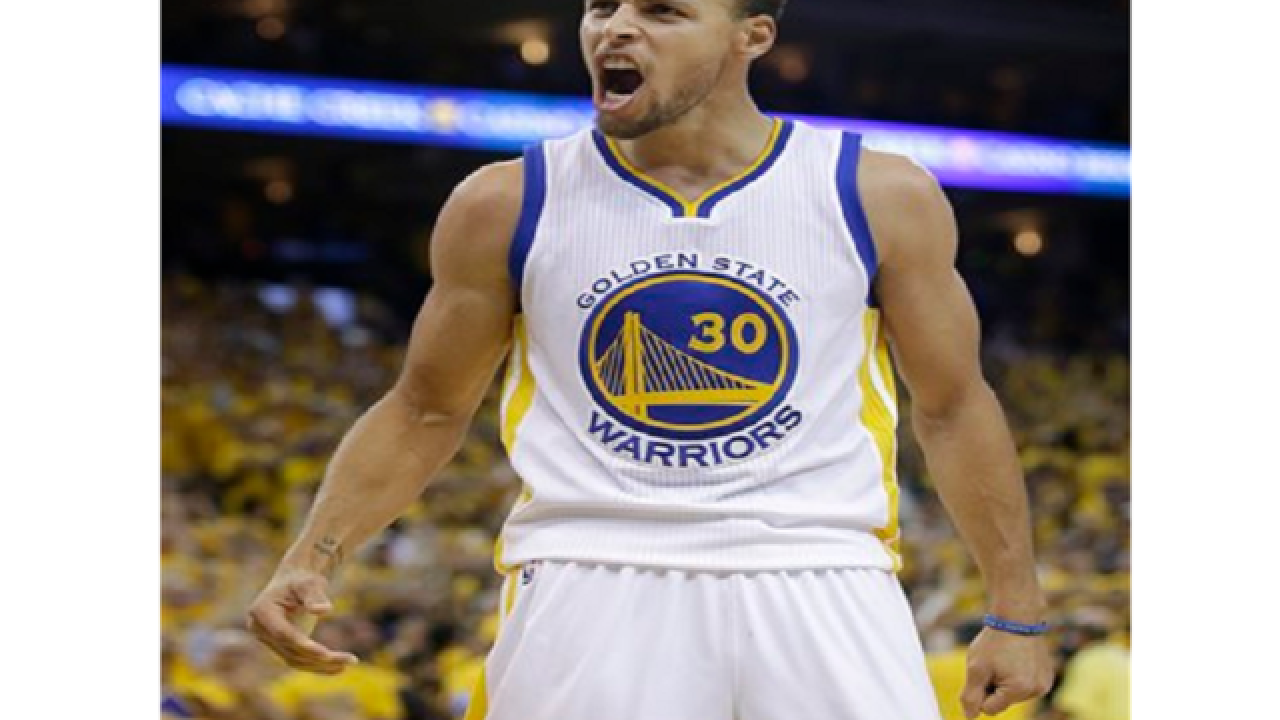 The Golden State Warriors' historic season goes on, with just one left team to beat.
It's the same one they faced in last year's NBA Finals.
LeBron James and the Cleveland Cavaliers, looking far more formidable than the team Golden State defeated last year, are the opponent again for Stephen Curry and the Warriors beginning Thursday night.
Western Conference Finals - Game 7 | PointAfter
The Warriors barely got back, becoming the 10th team to climb out of a 3-1 hole by beating the Oklahoma City Thunder 96-88 on Monday night in Game 7 of the Western Conference finals. After winning a record 73 games in 2015-16, they could claim the greatest season in NBA history with four more victories.
They beat Cleveland 4-2 last June, but the Cavaliers will arrive in the Bay Area in much better shape than a year ago as they try to end Cleveland's 52-year title drought in pro sports.
"It'll be fun," Warriors All-Star Draymond Green said. "You know they're rolling right now, they got a lot of guys going, but looking forward to the challenge."
Kyrie Irving, who broke his kneecap in Game 1 last year, and Kevin Love, who had already been lost to shoulder surgery, are combining for more than 40 points per game in the postseason, poised to give James the help he didn't have during his furious but futile one-man show last year.
He averaged 35.8 points, 13.3 rebounds and 8.8 assists, but the Warriors won the final three games after James had carried the Cavs to a 2-1 lead.
James played in the last NBA Finals rematch, when his Miami Heat outlasted San Antonio in seven games in 2013 but were beaten in five games a year later.
It's part of James' run that has now reached six straight NBA Finals. He is 2-4 in the championship round and 0-2 with the Cavs, who were swept in 2007 in his first appearance with a team, like last year's injury-depleted unit, that was severely undermanned.
This time, he is surrounded by shooters, with Irving, Love, J.R. Smith and Channing Frye all having hot hands for a team that stormed through the Eastern Conference playoffs with a 12-2 record.
"Feeling good right now," Cavs coach Tyronn Lue said. "Focusing on trying to get better, using each practice, all the time we have to get better."
It's been a much tougher return trip for the Warriors, who had to endure Curry's knee injury earlier in the postseason before a huge challenge from the Thunder, who not only had the 3-1 lead, but also double-digit cushions in both Game 6 and 7.
"It took us until the last minute to get it done, but we're back," Curry said.
Cleveland would have had home-court advantage in the finals had the Thunder finished off the Warriors. Instead, the Cavaliers will be headed back to California on Tuesday.
Golden State won both meetings during the regular season, a home victory on Christmas and a dismantling in Cleveland a month later in one of the final games before the Cavs fired David Blatt and replaced him with Lue.
The tweaked finals format adds some extra break time and will make it a little longer if it goes the distance. Games 1 and 2 remain Thursday and Sunday, but Games 3 and 4 in Cleveland are on the following Wednesday and Friday. Game 7 wouldn't be until June 19.
Copyright 2016 The Associated Press. All rights reserved. This material may not be published, broadcast, rewritten or redistributed.