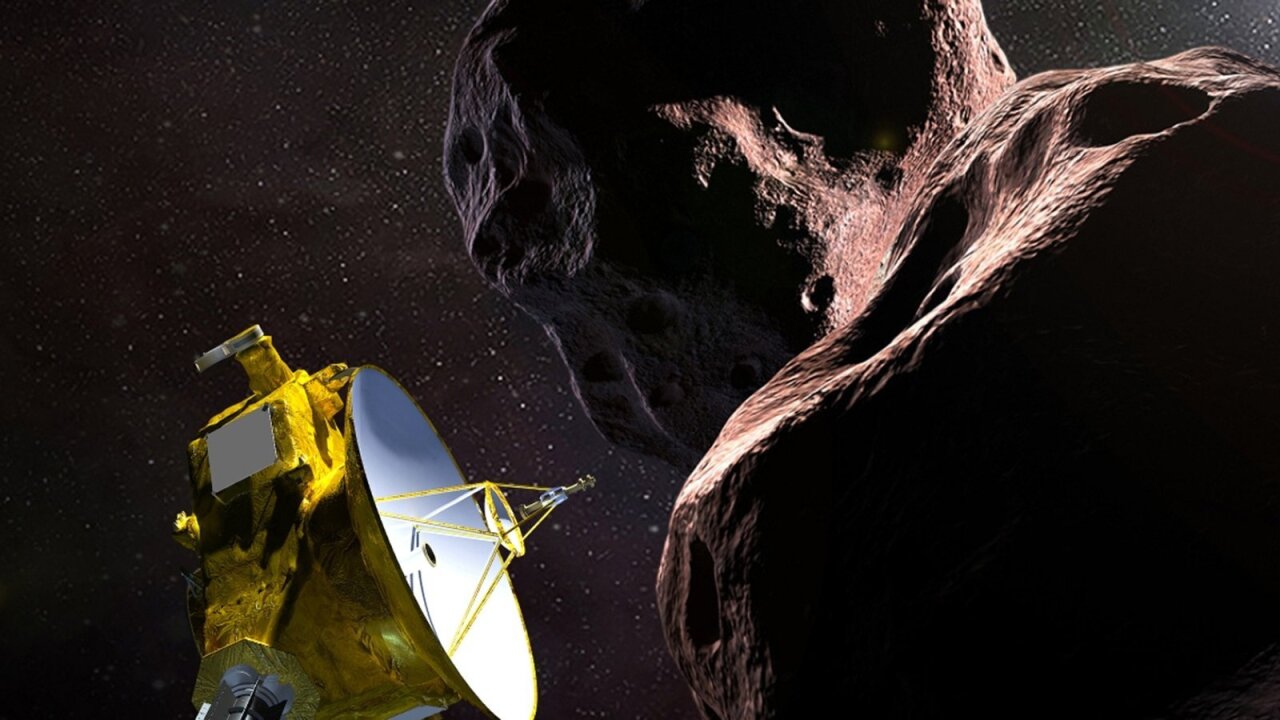 NASA/JHUAPL/SwRI/NASA/JHUAPL/SwRI
Mission scientists from NASA and the Johns Hopkins University Applied Physics Laboratory have confirmed that the New Horizons spacecraft conducted a flyby of Ultima Thule, a Kuiper Belt object that's a billion miles beyond Pluto.

(CNN) — The new year on Earth began with a record-setting space mission 4 billion miles away — a first look at an object on the edge of our solar system.

Mission scientists from NASA and the Johns Hopkins University Applied Physics Laboratory have confirmed that the New Horizons spacecraft conducted a flyby of Ultima Thule, a Kuiper Belt object that's a billion miles beyond Pluto.

Although the flyby occurred at 12:33 a.m. ET on Tuesday, the spacecraft is so far from Earth that the "phone-home" signal didn't reach us until about 10:30 a.m. ET.

Mission scientists were relieved about the success because there was only one chance to get it right as New Horizons screamed past Ultima at 31,500 miles per hour. This incredible feat was possible because thousands of operations on the spacecraft worked in sync.

"We've just accomplished the most distant flyby," mission operations manager Alice Bowman said. "This science will help us understand the origins of our solar system."

New Horizons has also sent back a first look at Ultima Thule — taken from half a million miles out, so pardon the pixels.

This is the best look scientists have ever had at Ultima. Before, they saw it as only a single pixel.

The image revealed that the object appears to have a bowling pin-like shape, elongated and spinning like a propeller. It's also could be two objects closely orbiting each other, but only more data will show for sure. The object is 20 miles long by 10 miles wide.

Expect never-before-seen high-resolution images and new science to come streaming in Wednesday and over the next few days.

"The data we have look fantastic, and we're already learning about Ultima from up close," Stern said. "From here out, the data will just get better and better."

Brian May, the guitarist for the legendary rock band Queen and an astrophysicist, is also a participating scientist in the New Horizons mission. He's particularly interested in stereo imaging for this leg of the mission. He was also inspired to release a new song celebrating New Horizons on New Year's Day.

"This mission represents to me the spirit of adventure, discovery and inquiry which is inherent in the human spirit," May said during the countdown to the flyby. He wrote a song to honor the mission called " New Horizons (Ultima Thule Mix) ."

And even the U.S. government shutdown couldn't stop NASA from celebrating such an extraordinary feat.

"Congratulations to NASA's New Horizons team, Johns Hopkins Applied Physics Laboratory and the Southwest Research Institute for making history yet again. In addition to being the first to explore Pluto, today New Horizons flew by the most distant object ever visited by a spacecraft and became the first to directly explore an object that holds remnants from the birth of our solar system," NASA administrator Jim Bridenstine said. "This is what leadership in space exploration is all about."

What is Ultima Thule?

The object is so old and pristine that it's essentially like going back in time to the beginning of our solar system.

This flyby is the first exploration of a small Kuiper Belt object up close -- and the most primitive world ever observed by a spacecraft.

The Kuiper Belt is the edge of our solar system, part of the original disk from which the sun and planets formed. The craft is now so far from Earth that it takes six hours and eight minutes to receive a command from Earth.

If New Horizons sounds familiar, it's because this is the spacecraft that conducted a historic flyby of Pluto in 2015, sending back unprecedented images of the dwarf planet and revealing new details about Pluto and its moons.

The New Horizons mission was extended in 2016 to visit this Kuiper Belt object. The mission was launched in 2006 and took a 9½-year journey through space before reaching Pluto.

New Horizons flew three times closer to Ultima than it did by Pluto, coming within 2,200 miles of it and providing a better look at the surface. After the quick flyby, New Horizons will continue on through the Kuiper Belt with other planned observations of more objects, but the mission scientists said this is the highlight.

The object was previously known as 2014 MU69. The name Ultima Thule was chosen through a nickname campaign hosted by the New Horizons team.

Thule was a mythical island on medieval maps, thought to be the northernmost point on Earth. Ultima Thule essentially means "beyond Thule," which suggests something that lies beyond what is known. It's fitting, considering New Horizons' pioneering journey.