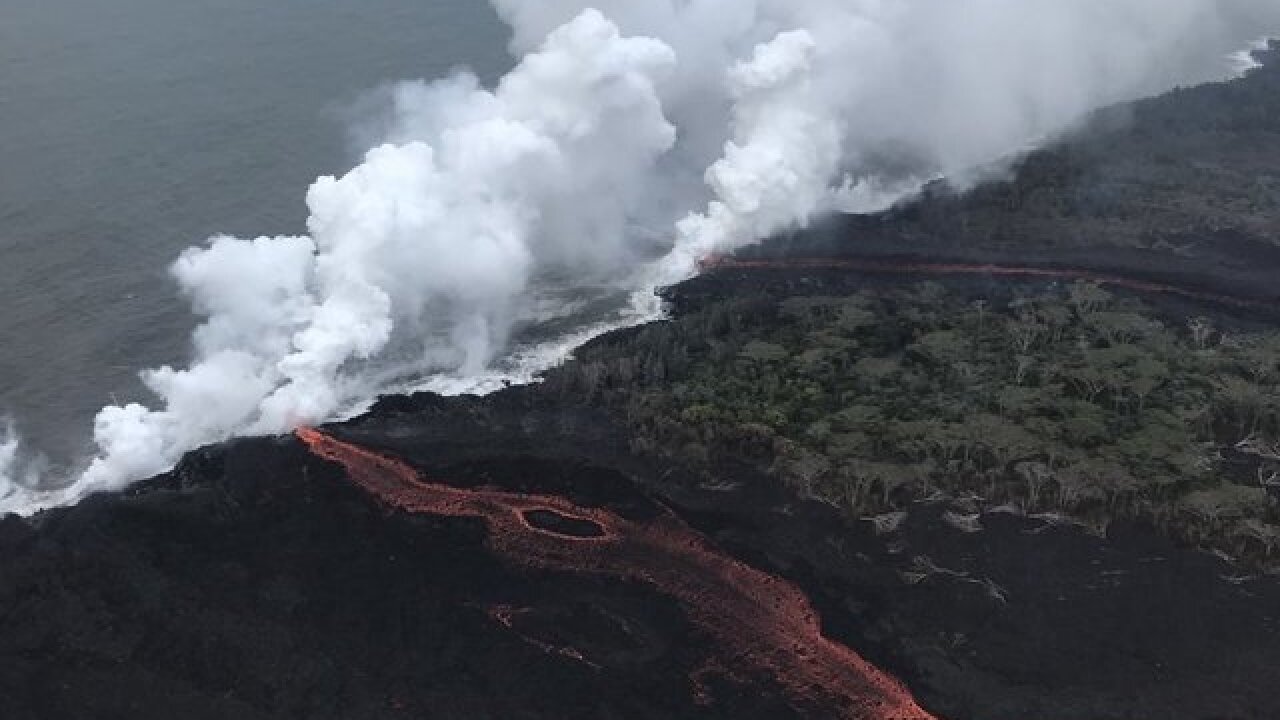 "Any residents remaining in the current affected areas should evacuate now," read an emergency message sent by the County of Hawaii Civil Defense.

Thick waves of fresh lava from fissure 22 and 7 -- which officials say is producing the largest amount of lava -- are blazing down a mount of volcanic rock.

"It's just a matter of time," resident Steve Gebbie says. "I don't know what's going to be left of Leilani, I really think it might be wiped out."

This week, eruptions sent ash plume 10,000 feet up in the air. More red and orange lava fountains emerged and lava reached the Pacific Ocean, presenting a new threat for residents.

The oozing lava has destroyed a total of 82 structures on Hawaii's Big Island and other 37 structures have become inaccessible in the last days, said Hawaii County Civil Defense Administrator Talmadge Magno.

About 2,200 acres have been covered in lava since the Kilauea volcano eruptions began on May 3, Magno added.

The US Geological Survey said there were 90 earthquakes of multiple intensities at the volcano summit in about 6 hours on Friday.

'This is the Hawaiian way'

As lava bombs were fired in every direction, Darryl Clinton kept homes on Hawaii's Big Island from going up in flames.

Armed with little more than a garden house, he doused lava bombs as they bombarded his and his neighbors' home, destroying windows, crashing through the roof and igniting parts of the house.

"This is the Hawaiian way," his neighbor and close friend Steve Hill said. "You take care of each other."

Hill's family had packed up their furniture and valuables and left their property convinced the lava erupting from fissures in the area would consume their slice of paradise.

The homes are still there today, thanks to Clinton's efforts, he said.

Last week, Hill had pleaded with Clinton to leave the homes and let them burn. The onslaught of molten lava bombs seemed unstoppable, and Clinton's task seemed far too dangerous.

Clinton didn't listen. The next day, while he was standing on Hill's top deck when a lava bomb the size of a bowling ball flew through the air like a line drive and hit Clinton with such force that it snapped the bones in his leg.

"It just took my leg out and threw me against the wall, the most extreme force I've ever felt in my life," Clinton told CNN from his hospital bed in Hilo, Hawaii.

Clinton has had at least three surgeries and is in Honolulu for another. He will be off his feet for weeks, but he says he doesn't regret his choice to stay to protect the homes.