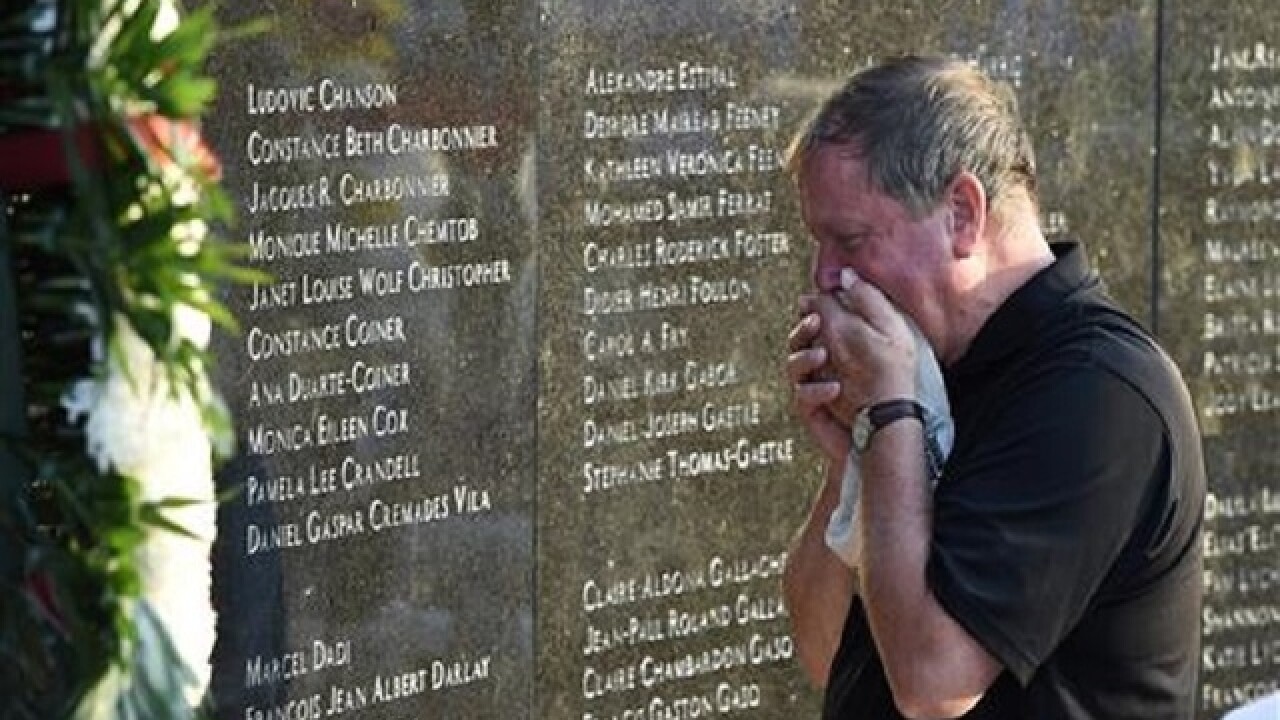 SHIRLEY, N.Y. (AP) — Family members of the 230 victims of the TWA Flight 800 crash gathered with those who tried to rescue their loved ones on a Long Island beach to mark the 20th anniversary of the disaster.
"It's been a difficult 20 years," John Seaman, head of the TWA Flight 800 Families Association, told several hundred people gathered Sunday for an hour-long service at a permanent memorial laden with colorful wildflowers, sea grass and a lighted row of flags representing each of the countries which had citizens on the Paris-bound flight.
"We've all suffered. We have persevered. Together and apart, we have persevered," Seaman said.
The midair explosion of Flight 800 moments after the flight left Kennedy Airport spawned a yearlong FBI probe — the biggest in the agency's history to that point — and initially was thought to have been downed by a bomb or missile. The National Transportation Safety Board eventually concluded that the probable cause was faulty wiring sparking an explosion of overheated vapors in the plane's center fuel tank.
Heidi Snow, who lost her fiancé in the crash, was among those who read aloud the names of the victims. After the crash, she started an organization that uses family members from past plane crashes to mentor those suffering whenever a plane crashes anywhere in the world.
"Lives were changed in an instant," the San Francisco woman said.
She said some Flight 800 family members who had delayed facing their grief still reach out to her organization.
"It's never forgotten, as you can tell by the turnout here," Snow said.
Kenneth Maxwell, a now retired FBI agent who was one of the chief investigators, said in an interview that the inability to be able to say definitively what sparked the center fuel tank haunts him to this day.
"That tragedy scarred many people forever. I spent 17-and-a-half months out there. I still feel the pain not only of all the families and of never coming up with the slam dunk definitive resolution. When we walked away we walked away, despite our best effort, puzzled, and forever wondering if someone one day will be able to put it all together," he said.
After the ceremony, family members dropped roses and white carnations in the ocean. Some wiped tears as they rubbed their hands over names on a memorial wall.
Rich Meyer watched them, recalling that he had tears in his eyes two decades ago as he swam far enough out in the water so that roses tossed into it by people grieving would float toward the crash site rather than the shore.
"I feel so bad for everybody. I have tears just thinking about it every summer," he said.
Seaman said the passage of time helps.
"Maybe it's Ok for us to forget a little. Sometimes memories do fade. Maybe forgetting and forgetfulness is a gift time gives us as time passes," he said.
Copyright 2016 The Associated Press. All rights reserved. This material may not be published, broadcast, rewritten or redistributed.