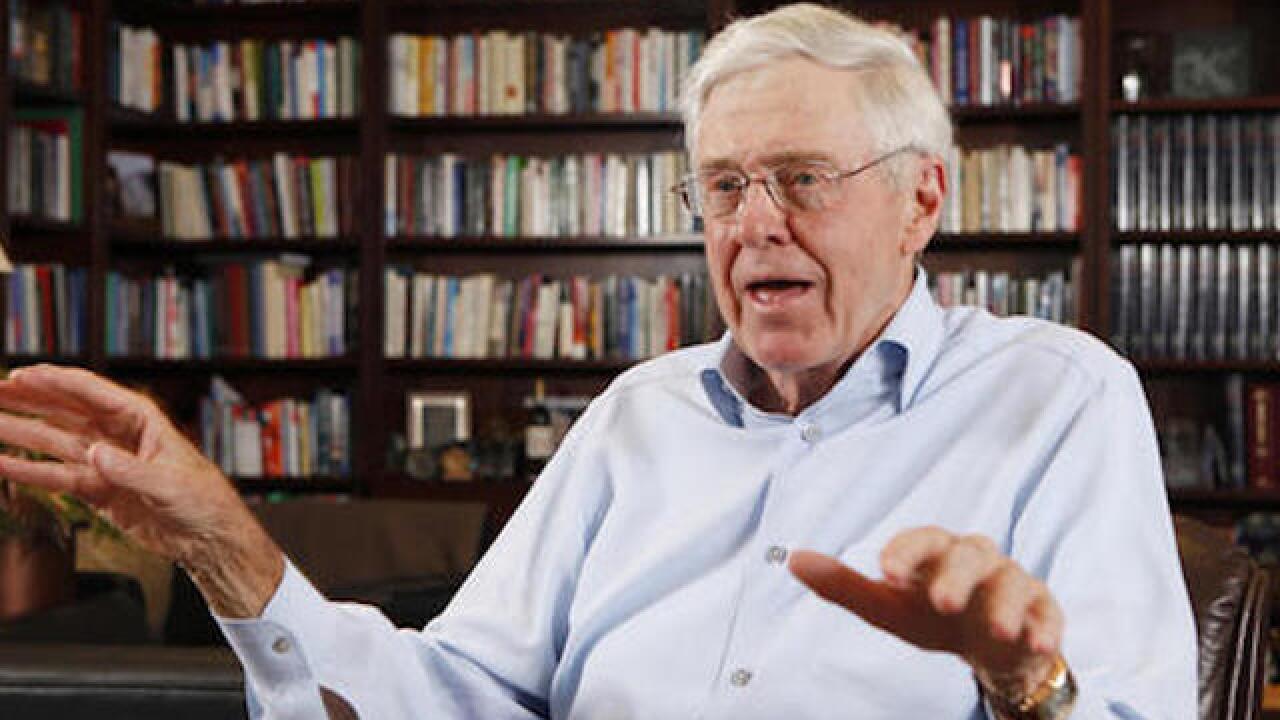 Copyright Associated Press
Bo Rader
<p>In this photo May 22, 2012 file photo, Charles Koch speaks in his office at Koch Industries in Wichita, Kansas. Billionaire industrialist and conservative benefactor Koch is hosting hundreds of the nation's most powerful political donors this weekend in Colorado. The exclusive gathering at the foot of the Rocky Mountains is open to donors who promise to give at least $100,000 each year to Koch-approved groups. The Koch network has avoided supporting Donald Trump's presidential campaign so far. (Bo Rader/The Wichita Eagle via AP)</p>

During an exclusive gathering with some of the nation's most powerful Republican donors Sunday, the 80-year-old conservative icon also dismissed as "a blood libel" any suggestion he might support Democrat Hillary Clinton.

"At this point I can't support either candidate, but I'm certainly not going to support Hillary," Koch told hundreds of donors gathered for a weekend retreat in a luxury hotel at the foot of the Rocky Mountains.

With Election Day just three months away, Koch and his chief lieutenants openly refused to support the Republican presidential nominee, focusing their tremendous resources instead on helping the GOP win competitive Senate contests in states like Ohio, Pennsylvania and Wisconsin.

Details on Koch's decision emerged Sunday, the second day of a three-day gathering for donors who promise to give at least $100,000 each year to the various groups backed by the Koch brothers' Freedom Partners — a network of education, policy and political entities that aims to promote a smaller, less intrusive government.

The ambitious Koch network has invested hundreds of millions of dollars to influence politics and public policy over the last decade. The network planned to invest heavily in the 2016 presidential contest, but sharply changed its course after Trump became the Republican standard-bearer.

The decision was welcomed by many of the 400 donors who attended the weekend retreat, even though "a reasonably significant" number of attendees wanted the Koch network to support Trump, said Chris Wright, a Colorado-based energy entrepreneur.

"Terrible and truly awful are the two choices," Wright said, suggesting that even if he voted for Trump in November — and that's not decided — he wouldn't go any further.

"We're not going to give any money to support Donald Trump," Wright explained.

Timothy Busch, a California-based donor, said he'd vote for Trump but do nothing more on his behalf.

"He doesn't have enough civility and he's not a man of humility," Busch charged, citing specific complaints about Trump's positions on immigration and trade.

Charles and David Koch have hosted such gatherings of donors and politicians for years, but usually in private.

A few of reporters, including one from The Associated Press, were invited to attend some of the forums. As a condition of attending, reporters were not permitted to identify any donors without their permission.

Koch addressed the presidential contest in a general way on Sunday when reporters were present, but went further during a closed-door meeting later in the day.

He outlined two primary criteria for deciding whether to support a candidate, Wright said: whether the candidate would "believes in and will fight for free markets" and whether he or she has a viable chance to win.

Both Clinton and Trump failed the first test, Wright said.

With reporters on hand, Koch described his first priority as "to preserve the country's financial future and to eliminate corporate welfare."

"Since it appears that neither presidential candidate is likely to support us in these efforts," he said, "we're focused on maximizing the number of principled leaders in the House and Senate who will."

Trump has been embraced by many Republican voters, but David and Charles Koch have deep policy differences. The libertarian-leaning Koch brothers oppose Trump's position on immigration, trade, minimum wage and criminal justice reform, among others.

The day before, Trump thumbed his nose at the Koch gathering from Twitter.

"I turned down a meeting with Charles and David Koch," the New York billionaire tweeted. "Much better for them to meet with the puppets of politics, they will do much better!"

The weekend's agenda featured a series of policy discussions and appearances from at least three governors, four senators and four members of the House of Representatives, including House Speaker Paul Ryan.

Asked about the Koch decision not to endorse Trump, Wisconsin Gov. Scott Walker, said, "I certainly respect their point of view on this."

Koch has put the network's budget at roughly $750 million through the end of 2016.

A significant portion was supposed to be directed at electing a Republican to the White House. It will instead go to helping Republican Senate candidates in at least five states: Ohio, Pennsylvania, Nevada, Wisconsin and Florida.

"To address the current political crisis, our first objective is to stop the worst federal policies regardless of who is the next president," Koch said. "We've got to remember that Republican presidents advance a lot of bad policies, just like Democrats do."