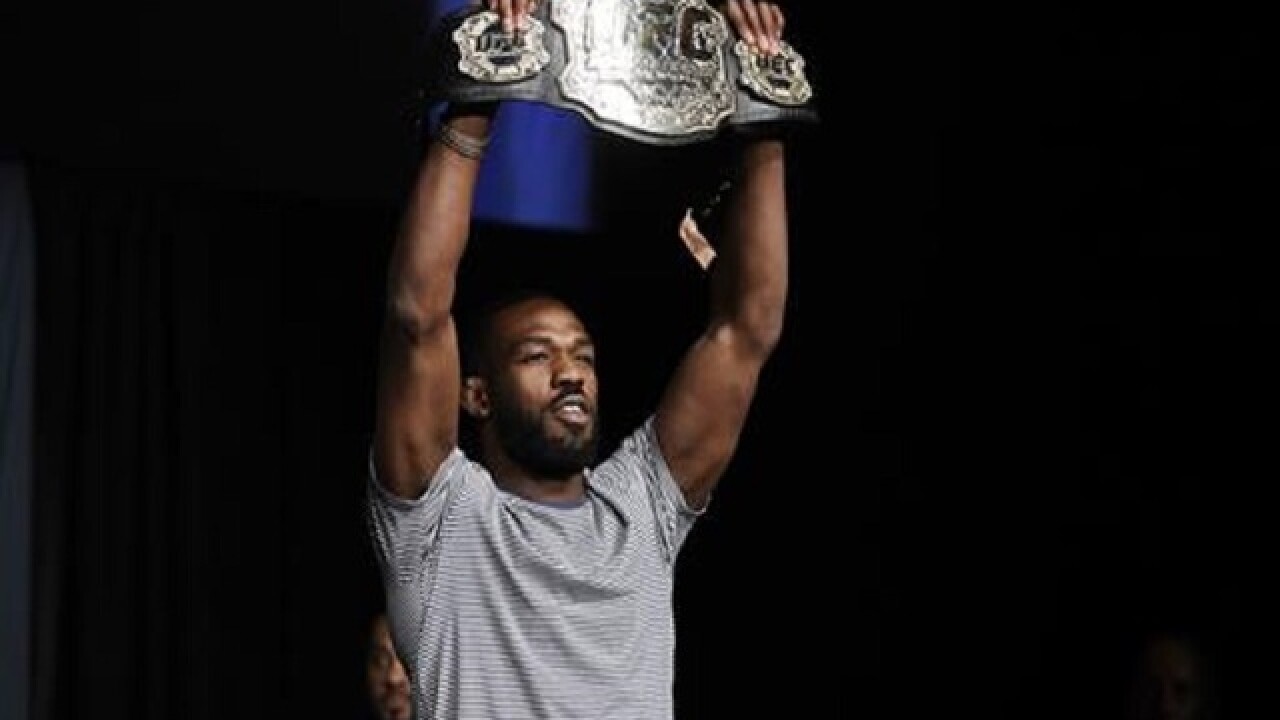 LAS VEGAS (AP) — UFC interim light heavyweight champion Jon Jones was notified of a potential doping violation Wednesday night, ruling him out of his bout with Daniel Cormier in the main event of UFC 200.
A grim-faced UFC President Dana White announced the dramatic change three days before the mixed martial arts promotion's landmark show.
"He's got the chance to prove himself innocent before being called guilty," White said. "But if it's true, it's obviously super disappointing."
Jones tested positive for an unspecified banned substance in an out-of-competition sample taken June 16 by USADA, which administers the promotion's anti-drug policy. While Jones is considered the top pound-for-pound fighter in MMA, he has apparently failed drug tests around two of his past three scheduled fights.
Brock Lesnar's heavyweight bout with Mark Hunt is UFC 200's new main event at T-Mobile Arena in Las Vegas. Lesnar's much-anticipated return from a 4 1/2-year MMA absence was previously the penultimate bout on the star-studded pay-per-view card assembled by the UFC for its biggest event of the summer.
White said he doesn't know what substance was detected in Jones' test, but acknowledged that this violation could lead to a multiyear suspension for one of the UFC's biggest stars.
After Jones beat Cormier by clear decision in their first meeting in January 2015, the UFC announced that Jones had tested positive for apparent cocaine use before the fight. The detected cocaine metabolite was not banned for out-of-competition use by the Nevada Athletic Commission, which claimed it couldn't stop him from fighting.
But Jones' behavior outside the cage repeatedly has hampered his meteoric rise inside his sport. Shortly after his first positive drug test, he was suspended for several months in 2015 due to his involvement in a hit-and-run accident in Albuquerque, New Mexico, where the upstate New York native lives and trains.
Jones' manager, Malki Kawa, didn't immediately return a message Wednesday night.
Jones and Cormier appeared at the UFC 200 news conference earlier Wednesday, trading their usual insults and glares in a rivalry that has festered for years. Cormier won the vacated light heavyweight title during Jones' suspension, but acknowledged his reign wouldn't be real until he beat Jones in the cage.
Cormier was downbeat when he appeared alongside White at the hastily arranged news conference, realizing he is likely to miss out on millions from his share of the pay-per-view revenue unless a late replacement fight can be booked. The former U.S. Olympic wrestler said he is "not the moral police. It's not my place to judge him."
"For all that I knew, he looked like he was doing good," Cormier added. "He said all the right things."
Jones' UFC suspension was lifted in October 2015, and he returned to competition in April with a victory over Ovince Saint Preux. Jones was scheduled to meet Cormier in that bout, but Cormier pulled out with a foot injury.
White said the UFC would attempt to book another fight for Cormier, but isn't sure it could find a reasonable opponent on such short notice. Cormier would get some compensation if he misses out on the UFC 200 card, which is expected to be one of the biggest sellers in MMA history.
"When you have the biggest, baddest fight card ever assembled, it doesn't sting as bad when you lose a fight," White said. "But it stings real bad for Daniel Cormier. It's devastating to him in every possible way."
The main event of UFC 200 has now been changed twice. Conor McGregor was slated to meet Nate Diaz in a rematch, but the bout was bumped to next month after McGregor wrangled with the UFC over money and promotional obligations, even briefly claiming he was retiring.
UFC 200 still features two title fights and the return of Lesnar, the biggest pay-per-view star in UFC history.
Copyright 2015 The Associated Press. All rights reserved. This material may not be published, broadcast, rewritten or redistributed.