Hundreds of US dams in bad condition as infrastructure ages

Hundreds of US dams in bad condition 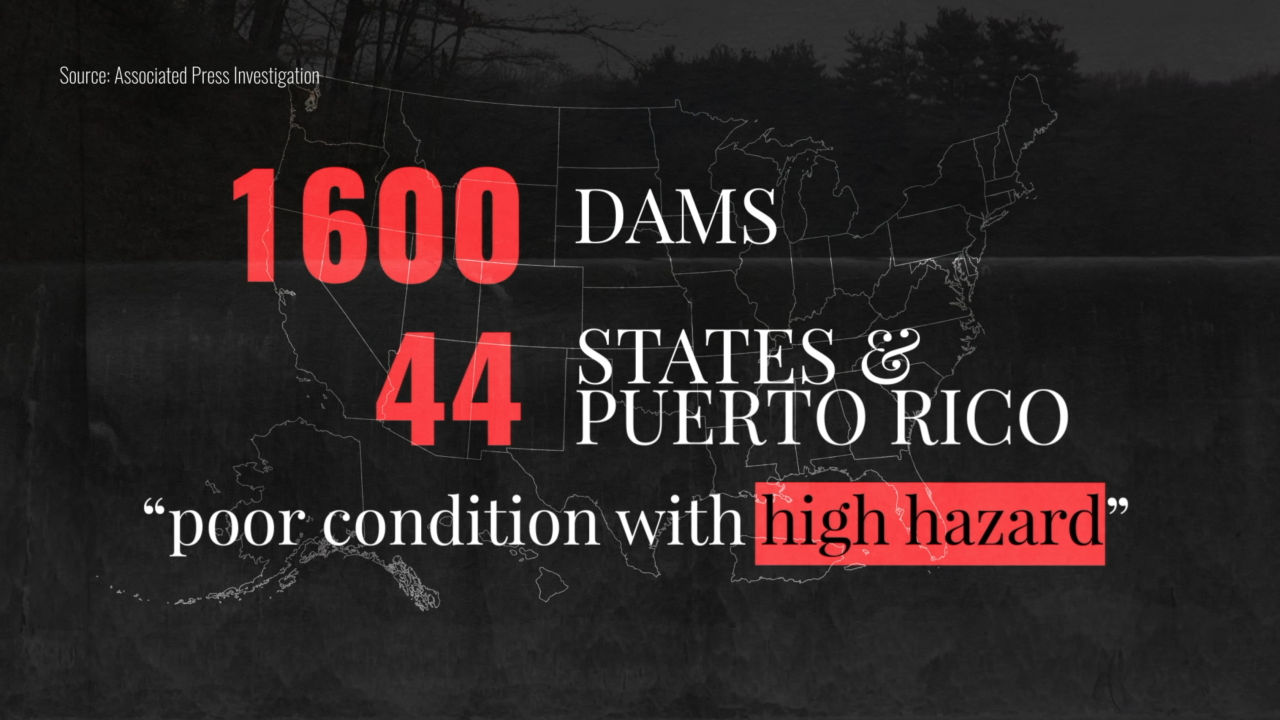 KAUAI, Hawaii – Hawaii is often thought to be a picture of paradise and it is, but a look at the state can also give us a snapshot into what aging dam infrastructure in America looks like along with the danger that it poses.

“It was like a reverse tsunami. It was as if a tsunami didn’t come from the ocean. It came from the mountains,” said Bruce Fehring in Kauai.

In the middle of the night, after days of rain Kauai’s Ka Loko dam failure sent a half billion gallons of water rushing down a mountain on the north side. Directly in the path was one of Bruce Fehring’s properties. He owned several vacation rental properties on the island.

“It was devastating to see the destruction, that this ‘tsunami’ coming down from the mountain had caused. It was shocking,” said Fehring. In that moment he also questioned, “Where was the house? Where was the trees? Where’s anything?”

The property was leveled and unrecognizable.

“All of a sudden police and firemen were there and they are saying ‘Were there people?’” Fehring recalled. “I said ‘yea, they were living in a house, the house is not there.”

Seven people lost their lives. Four of Fehring’s family friends, his son-in-law, his oldest daughter, and his young grandson.

“We found three of the seven bodies, the rest were lost forever,” said Fehring.

The tragedy on Kauai was caused in part by the dam’s nearly century-old infrastructure and in part because its private owner was over-filling the dam’s emergency spillway with little oversight.

“Those in government should have insisted upon maintaining their dam inspection schedule, which they didn’t,” Fehring explained.

The state’s Department of Land and Natural Resources (DLNR) has made changes, since.

“There were statutory changes as well as new administrative rules that we did pass,” said Edwin Matsuda who is a Chief Engineer on Dam Safety with the DLNR.

In the past decade, funding has also increased for state dam inspections and repairs, but perhaps not enough. Hawaii still has at least 50 dams listed in “poor condition with high hazard,” meaning if they fail, the outcome would again be deadly and destructive.

“We are working as best as we can we are regulatory agency so there are some things that are outside our authority,” explained Matsuda.

Hawaii, and other states, still have challenges with monitoring privately owned dams and their infrastructure conditions.

However, to be more transparent, the state has created new online maps of all its dams with information on the current danger levels and evacuation plans, so that now residents know more than Bruce Fehring did in 2006.

“I think it is very important for people to know today that they are very vulnerable to the dangers of dam breaches,” said Fehring. “They are the people who should be raising their voice and saying ‘there’s a dam and if it lets go the same thing that happened to Bruce Fehring in Kauai could happen to our family’.”

Fehring’s message is to American families outside Hawaii as well.

A two-year Associated Press investigation into state and federal dam infrastructure reports revealed there are more than 1,600 dams in at least 44 states and Puerto Rico that have infrastructure listed in “poor condition with high hazard.” That’s thousands of people who live downstream and may be unaware of the potential danger they are in.