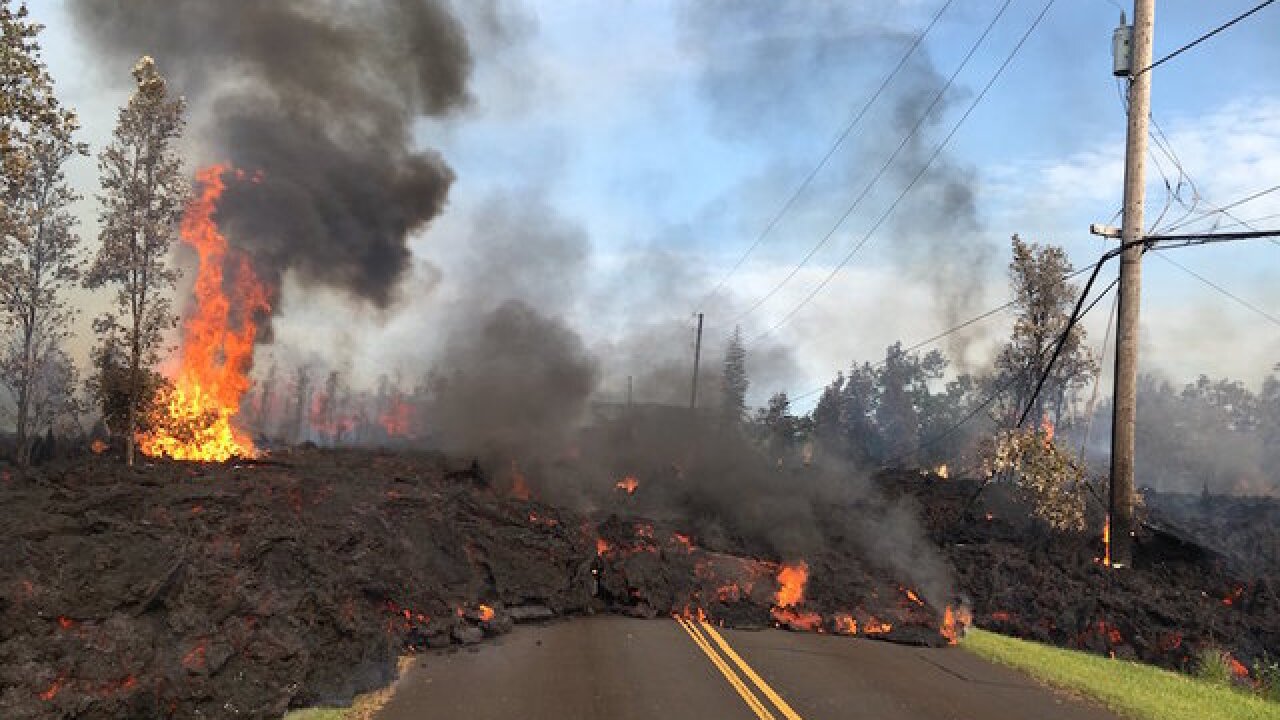 © 2018 Cable News Network, Inc.
USGS
<p>Lava from fissure 7 slowly advanced to the northeast on Hookapu Street in Leilani Estates subdivision on May 6, 2018.</p>

Hawaiian authorities are urging sightseers to stay away as Leilani Estates residents return to check on their neighborhood, which is threatened by lava and toxic gases emerging from fissures in the subdivision.

Cracks emerged in the volcano's East Rift Zone -- an area of fissures miles away from the volcano's summit. All residents of Leilani Estates, a community of about 1,700 people near Big Island's eastern edge, and nearby Lanipuna Gardens were ordered to evacuate.

The eruption was followed by a 6.9-magnitude earthquake Friday.

As of Sunday, 10 fissures had opened and 26 homes had been destroyed. The Hawaiian Volcano Observatory said that active venting of lava and hazardous fumes continued.

The Kilauea volcano has been erupting almost continuously since 1983, according to the US Geological Survey. Activity along the East Rift Zone has shifted down and then back up the rift, said CNN meteorologist Michael Guy. Each one of the episodes that has occurred in this 35-year period has lasted months to years, so there's no definitive way to predict how the volcanic activity will last, Guy said.

Some Leilani Estates residents were able to return to their properties from Sunday to retrieve pets, medicine and vital documents.

Sunday evening, Civil Defense said Leilani residents would be able to check on their properties until further notice between 7 a.m. and 6 p.m. local time, with authorities on the scene determining which areas were safe to enter.

"Please be aware that because of unstable conditions that involve toxic gas, earthquakes and lava activities, lines of safety can change at any time. You must be prepared to leave areas if required," it said in a statement.

"Please, the residents of Leilani need your help. This is not the time for sightseeing. You can help tremendously by staying out of the area," Civil Defense said, warning that police had established a policy of zero tolerance towards looting or vandalism.

"Under Emergency Provisions, any looting or vandalism will be treated as a felony," the statement said.

Volcanic gases at Lanipuna Gardens meant residents did not have access to that neighborhood, it said.

The eruptions have released high levels of sulfur dioxide into the air, according to the civil defense agency. The federal Agency for Toxic Substances and Disease Registry says the gas can be life-threatening.

Breathing large amounts of sulfur dioxide can result in burning of the nose and throat, and breathing difficulties. Senior citizens, the young and people with respiratory issues are especially vulnerable to the gas, the state's Emergency Management Agency said.

The Hawaii Department of Health has warned consumers that no masks sold to the general public in stores will protect against "the extremely dangerous volcanic gases" being released.

"First responders require special masks and training not available to private citizens," the department said in a statement Sunday.

"The best way to protect yourself and your family from the extremely dangerous volcanic gases is to leave the immediate area of the volcano defined by the police and fire department," it said.

Hawaii County Civil Defense administrator Talmadge Magno told CNN affiliate KHON Saturday that some first responders had been affected by the gasses on the first night when levels were particularly high -- experiencing "headaches and so forth" -- but that they had recovered.

The American Red Cross has opened two shelters at the Pahoa and Keaau Community Centers, where some evacuees have gathered while they await news about their homes.

Mayor Harry Lim said on Twitter Sunday that an eruption information center would open in Pahoa Monday to address questions from those affected.

The Hawaii State Department of Education said that all public schools on Big Island would be open Monday but that students absent due to evacuations would not be penalized. It said in a statement that school buildings had been checked for earthquake damage and found to be safe.

Corey Hale is one of the residents staying at the Pahoa Community Center. She was originally staying with a friend, but later chose to camp out in the parking lot.

"I wanted to be around a lot of people," Hale said. "It just felt better." Volunteers there have kept evacuees safe, well-fed and have plenty of hot coffee ready in the mornings.

Still, Hale wishes she'd been able to get more things from her home in Lanipuna Gardens before she left, like a compass that belonged to her great-grandfather, and other family heirlooms.

"At this point, I've got what I've got on my back," she said. "I didn't realize until this morning, I've got one pair of shoes."

Meantime, Leilani resident Shirley Doctor was able to return briefly to her house of 38 years Sunday.

Doctor told CNN affiliate KITV that her sons had invited friends to help her pack up.

"I came home to get my dogs, that was the most important thing. My dogs and my pig ... Everything else is just material," Doctor said.

Another resident, Steve Gebbie, told CNN's Stephanie Elam on Saturday that he initially stayed home when evacuations were ordered. But when he saw lava tear through the streets near his Leilani Estates home, he knew he needed to leave.

He didn't know what would become of his house, one he built with his own hands.

"Now it's trying to figure out what the future brings. ... My work. My job. Am I going to have to move to somewhere else on the island?"

Jordan Sonner has been staying with a friend since she fled her home right outside Leilani Estates.

When Sonner bought her property in 2016, she knew the neighborhood sat in the shadow of the Kilauea volcano.

She was also aware that one day the volcano could erupt, Sonner said, and lava could overtake the area. But she was more excited about her home and being a first-time homeowner.

"At the time, I understood it as a possibility," she said. But she never thought it would be a reality.

Sonner was at work this week when she heard that lava had erupted in her neighborhood.

"It was a moment of panic," she said, "because the only thing I knew was, 'lava in Leilani.'"

After Hawaii's false ballistic missile alert in January, Sonner realized she didn't have an emergency plan. "I took that to heart, and I got myself and my dogs prepared just in case something were to happen."

This time she was ready. She had bags packed with her clothes, important documents and whatever her dogs would need. The only other item she took was a chain necklace that belonged to her late father.

"I've always said that's the only thing I would run back into a burning building for, barring people and animals," she said. "There wasn't anything that important."