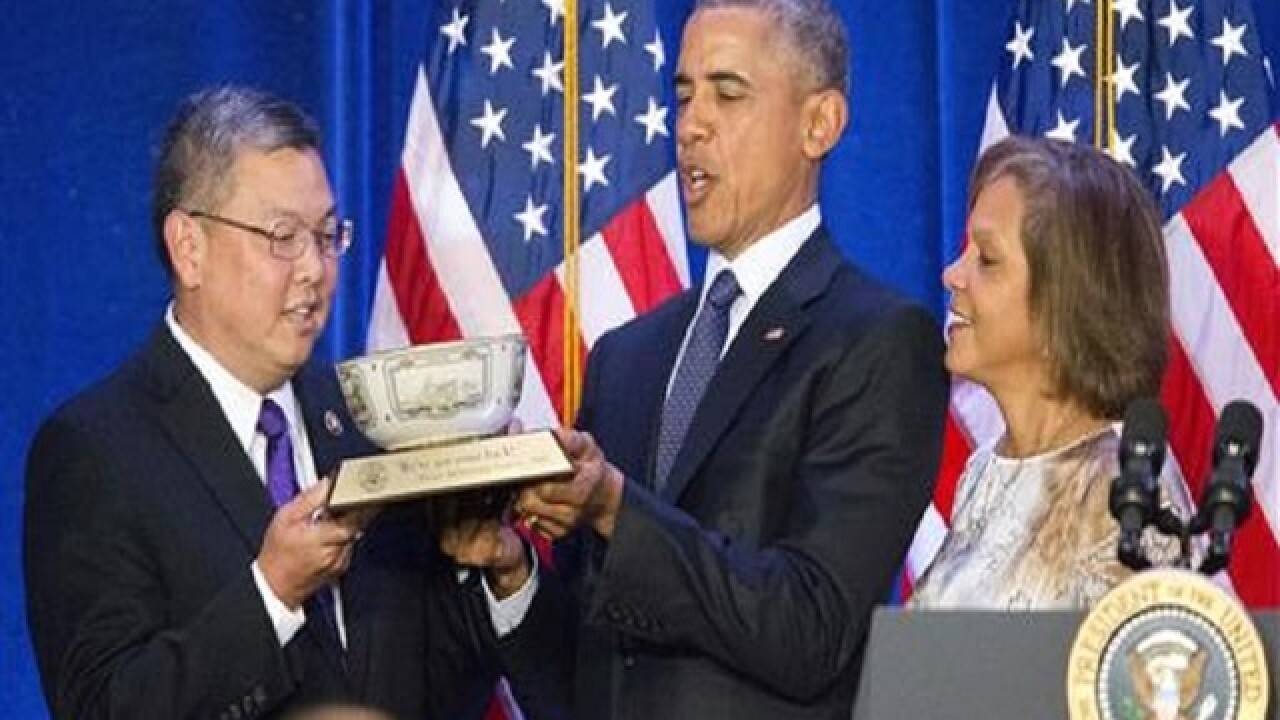 WASHINGTON (AP) — U.S. Rep. Mark Takai, a war veteran and long-time legislator known for his bright nature and deep commitment to service, died in his home Wednesday after a months-long battle with cancer.
Just 49-years-old, the first-term Democrat from Hawaii was surrounded by family when he died of pancreatic cancer, said Rod Tanonaka, Takai's chief of staff.
Takai had "a servant's heart, full of aloha," said U.S. Rep. Tulsi Gabbard, who served with Takai in Congress, the Hawaii Army National Guard and the state Legislature.
"No matter where he was, he always kept his service to Hawaii's people at the forefront of his actions," Gabbard said. "Mark's smiling face and ready laugh will truly be missed, but the impact that he made through his life of service to the people of Hawaii will always be remembered."
Born on Oahu, Takai served in the state House of Representatives for 20 years before he was elected to Congress, first winning his statehouse seat at age 27. He served as a longtime lieutenant colonel in the Hawaii Army National Guard for more than a decade and was deployed to the Middle East as a part of Operation Iraqi Freedom. In Congress, he sat on the Armed Services and Natural Resources committees.
"Mark humbly and effectively served the people of his state House and Congressional districts," Hawaii Gov. David Ige said in a statement. "In the often tumultuous world of politics, he has been a shining example of what it means to be a public servant."
Takai was first diagnosed with cancer in October and initially expressed optimism that he would recover. But in May he announced he would not seek re-election after he learned the cancer had spread.
Takai's passing was mourned among his colleagues in Hawaii and Washington on Wednesday, with politicians recalling his gentle, kind nature.
"All of us were moved when he announced his cancer to Vice President Biden and the Members at the House Democrats' Issues Conference earlier this year," said Democratic Leader Nancy Pelosi, in a statement. "Mark confronted his diagnosis with the spirit we all hope we would share when facing such an awful disease. As we mourn the loss of our friend, we draw fresh resolve to find cures."
Hawaii Superintendent of Schools Kathryn Matayoshi remembered Takai as a staunch advocate for public schools who pushed tirelessly for education funding and resources.
Takai is survived by his wife, Sami, and two young children, Matthew and Kaila. "The Takai family thanks the people of Hawaii for their support during this difficult time," said a release by his office. His family requested privacy.
"This is the deepest of losses and one that I feel very personally because of my friendship with Mark," said U.S. Sen. Brian Schatz, D-Hawaii. "Throughout his life, he was all about serving the people of Hawaii. He gave so much, and had so much more yet to give."
Ige's office was researching next steps to determine how a replacement would be named, spokeswoman Jodi Leong said.
The Hawaii Office of Elections will likely hold a special election in November for a replacement to serve through the remainder of Takai's term, which would have ended in January, said spokeswoman Nedielyn Bueno. In the same election, voters will also choose who will replace Takai for the two-year term starting in January, she said.
Former U.S. Rep. Colleen Hanabusa, who previously held Takai's seat in Congress but left to run unsuccessfully for U.S. Senate, is already running in the general election to replace Takai for the two-year term that starts in January.
Copyright 2016 The Associated Press. All rights reserved. This material may not be published, broadcast, rewritten or redistributed.