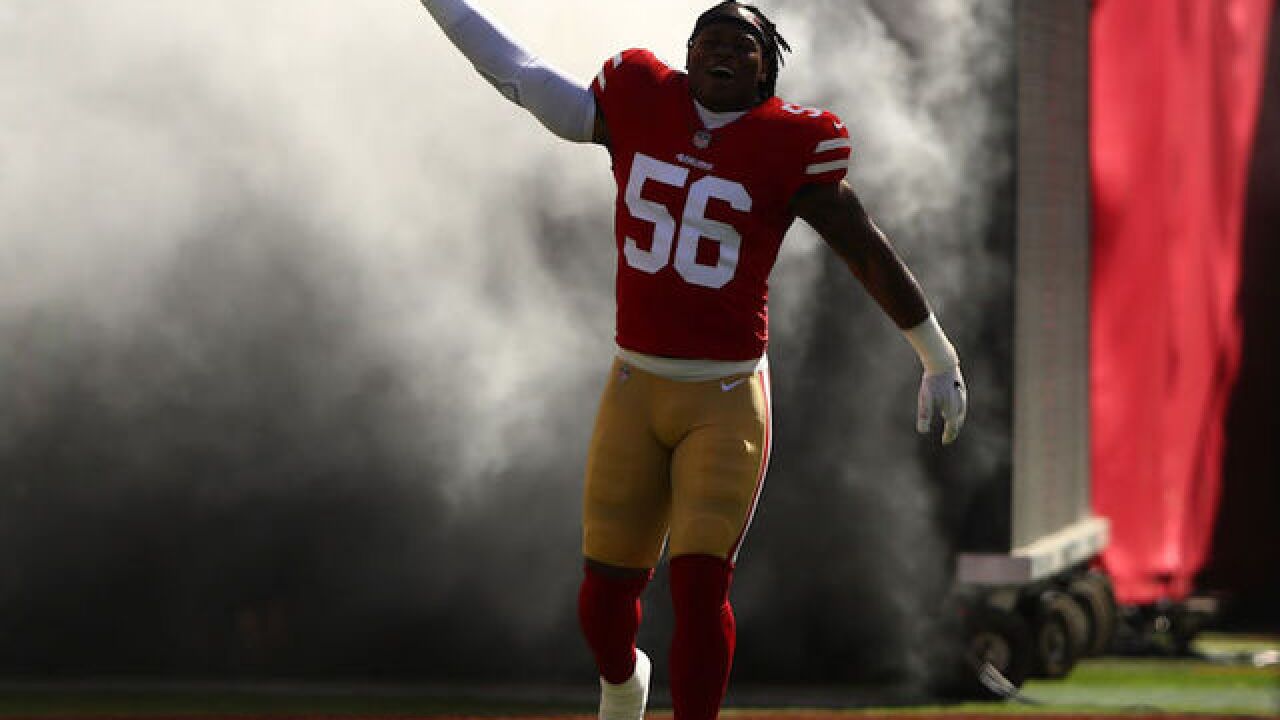 Image copyright 2018 Getty Images. All rights reserved. This material may not be published, broadcast, rewritten, or redistributed.
Ezra Shaw
<p>during their NFL game at Levi's Stadium on October 22, 2017 in Santa Clara, California.</p>

The woman involved in the domestic violence charge against NFL linebacker Reuben Foster said the Washington Redskins' decision to pick him up just days after his arrest felt like "a slap in the face."

"I just couldn't believe somebody picked him up in less than -- how many hours?" Foster's ex-girlfriend, Elissa Ennis, said Thursday on ABC's Good Morning America, or GMA. "Like, I was shocked."

The interview came more than a week after Foster, 24, then a linebacker for the San Francisco 49ers, was arrested and charged with one count of first-degree misdemeanor domestic violence in Tampa, Florida. Ennis, 28, reported that Foster pushed and slapped her during an encounter on November 24 at a hotel, police said.

"After having endured this relationship and then watching her name be tarnished in the press and then watching this person, from her perspective, go unpunished, she wanted to make sure that her side of the story got out," Pointer said.

Ennis told GMA it was the third time an incident like this one had happened, including a February case in Los Gatos, California, that resulted in a criminal charge against Foster that was later dismissed and another occasion in October when "neighbors called the police."

CNN reached out Thursday to Foster for comment. He has not commented publicly since the November arrest.

The 49ers released Foster the morning after the latest incident. Days later, the Redskins picked him up on waivers.

The NFL said Foster has been placed on the commissioner's exempt list, which means he cannot practice or play with the team as the league reviews his arrest.

Still, the move to immediately hire a player twice arrested for domestic violence sparked widespread outrage for a league that has struggled to deal with several players committing violence against women. Another NFL player, Kansas City Chiefs running back Kareem Hunt, was released last week after video showed him pushing and kicking a woman in a Cleveland hotel.

'I thought that he would change'

Ennis also spoke Thursday about Foster's behavior during a February incident that led to a felony domestic violence charge against the player in Santa Clara County, California.

The charge was dismissed after Ennis recanted her story on the stand. Even so, the Santa Clara County District Attorney's Office at the time said in a statement that officials still thought Foster had hurt Ennis, adding that "recantation is common among domestic violence victims" because of fear, guilt or coercion.

Indeed, Ennis told GMA the abuse did happen in February and that her recantation was a lie to protect him.

"I loved him, and love will have you doing things that's not in your best interest because of the person you love," she said, adding, "I thought that he would change."

Ennis was asked if she still loves Foster.

Now, Pointer said, even with all the support she is receiving, the road ahead is difficult for Ennis.

"This is a very challenging time for her, to expose intimate details of her relationship," Pointer said. "So she's just now focused on trying to move forward and pick up the pieces from her life."

Ennis said the incident in Tampa came after Foster arranged for her to fly to the Florida city to see him.

"He invited me to come see him in Florida, and I came, and he took one of my phones, and he slapped me and pushed me," she said. "I told him I was going to tell his new girlfriend that he paid for my flight out there. So, that's what triggered it."

She also said that she felt others there did not believe her.

"Even when I called the police, the 49ers came up there. I have pictures of the 49ers coming up there, trying to talk to the police saying I'm the same ex-girlfriend that sat up there and lied," she said.

A 49ers team spokesman said in a statement, "The 49ers fully cooperated with authorities, assisted in locating Mr. Foster and in no way impeded their investigation."

The 49ers general manager, John Lynch, said his team decided to release Foster because it had set up specific ground rules that he violated.

The Redskins on November 27 defended the decision to claim Foster.

"The Redskins fully understand the severity of the recent allegations made against Reuben," Doug Williams, the team's senior vice president of player personnel, said in a statement. "If true, you can be sure these allegations are nothing our organization would ever condone."

Williams faced further criticism after he reportedly tried to downplay Foster's arrest, saying it was "small potatoes" compared with crimes committed by people in power. He later apologized for what he called "insensitive" remarks.

Foster had previously been suspended by the NFL for the first two games of the 2018 season in connection with a weapons offense and a misdemeanor drug offense. Those cases were resolved earlier this year, the NFL said.

"I accept the league's decision and am sorry that my mistakes have hurt my team," Foster said in July when the suspension was announced. "I have a responsibility to the 49ers, our fans and our community, and I am committed to learning from this situation and making better choices in the future. The support I have received over the last five months has been humbling, and I do not take it for granted."