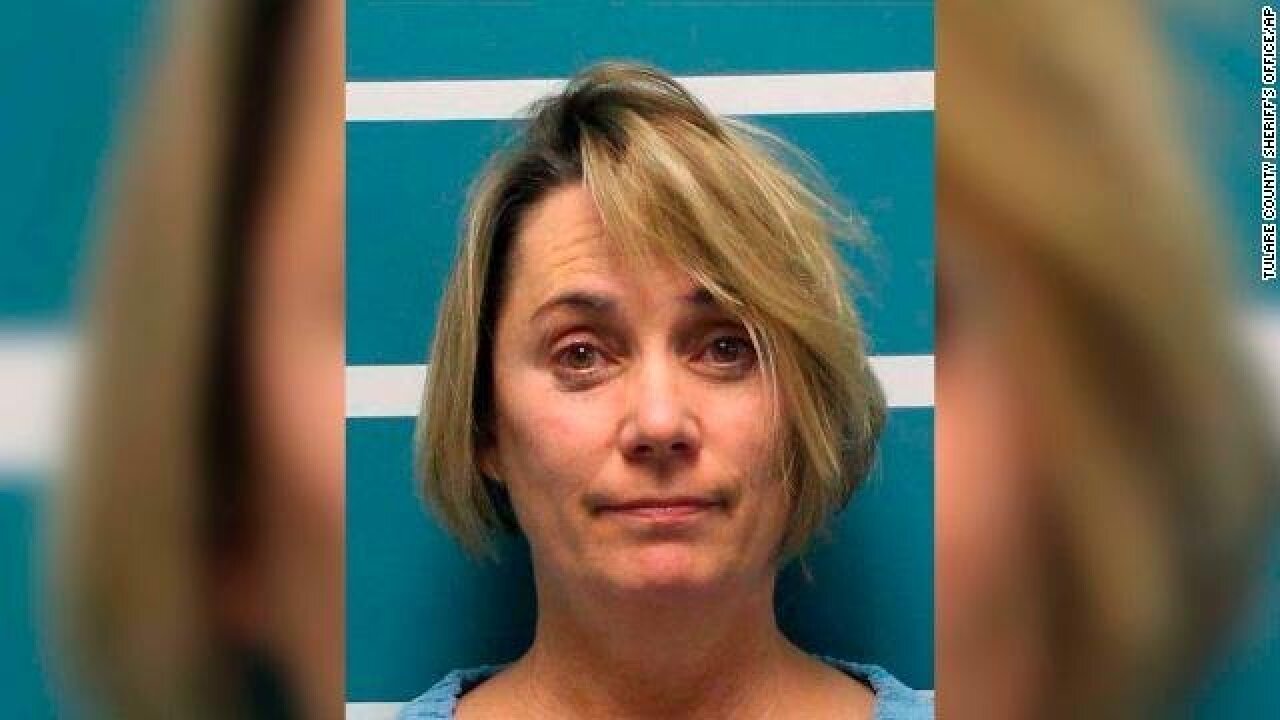 (CNN) -- A California high school teacher has lost her job and is facing multiple criminal charges after cellphone video emerged showing her forcibly cutting a student's hair while belting out an incorrect rendition of the National Anthem.

Margaret Gieszinger, 52, a former teacher at University Preparatory High School in Visalia, faces six criminal misdemeanor charges -- one count of false imprisonment, two counts of cruelty to a child, two counts of battery, and one count of assault. She could serve up to three and a half years in prison if she is convicted on all charges, according to the Tulare County district attorney's office.

Cellphone video posted to Reddit on Wednesday shows Gieszinger call a male student student to the front of the class. She makes him sit, then cuts chunks of his hair while singing "The Star-Spangled Banner," transposing verses as she sings.

The student moves away, and Gieszinger holds the scissors above her head, demanding that another student come to the front of the class. She can be heard telling students that someone will be chosen if no one volunteers. Gieszinger begins to sing again and darts between desks, lunging at a female student. Gieszinger pulls the female student's long hair to the side as she attempts to cut it. The student yells at her to stop, then joins others fleeing the room.

"He couldn't believe what was happening," said Mark Vogt, an attorney for the male student whose hair was cut by Gieszinger. "He, frankly, didn't know what to do. He thought to himself 'me or anybody else, she's coming for someone else.' And in the video, of course, we see that later. But he was absolutely terrified."

Witnesses told CNN affiliate KFSN that Gieszinger showed up to her first period chemistry class brandishing a pair of scissors and saying it was haircut day. As events unfolded, one student reportedly ran to the main office to ask for help.

Students also told KFSN that this was not the first strange episode involving the teacher.

The Tulare County Office of Education has made counselors from their mental health services program available to any students who need to talk. University Preparatory High School promises that Gieszinger will never return to its classrooms.

"We take very seriously the safety of the students in classrooms," the Office of Education said in a statement. "We are reviewing all available information and will take the most severe employment action appropriate."

Gieszinger was released from jail in Tulare County on Friday evening after posting $100,000 bail, according to KFSN. She has been ordered to stay at least 100 yards away from University Preparatory High School.

Gieszinger's husband told KFSN that the behavior shown in the cellphone video was completely out of character for his wife.

"She doesn't do stuff like that," he told KFSN reporter Brian Johnson. "It's not her. It's not who she is. So I don't know what was going on with her. I don't have any clue as to why she did that."