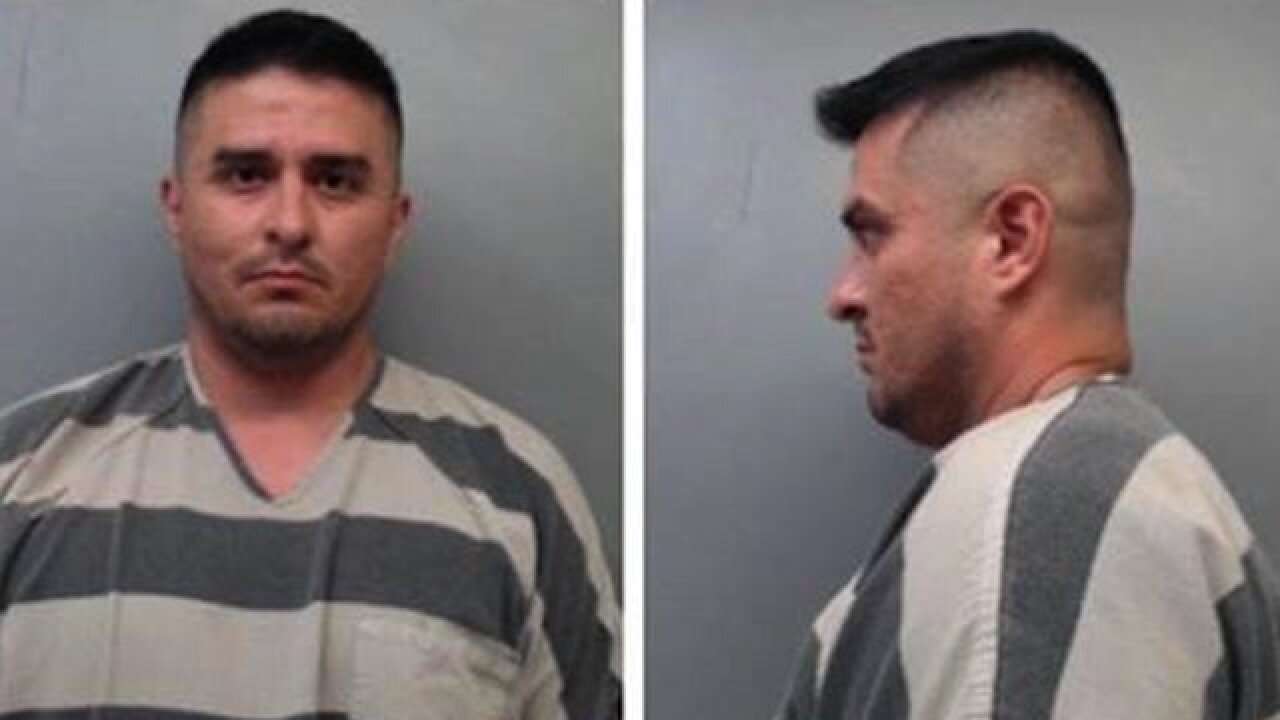 Copyright 2018 Scripps Media, Inc. All rights reserved. This material may not be published, broadcast, rewritten, or redistributed.
Webb County Sheriff's Office
<p>Juan David Ortiz, a 10-year veteran of US Customs and Border Protection, is being held on four counts or first-degree murder, among other charges. Authorities are calling him a serial killer.</p>

If not for the would-be victim's quick thinking, a supervisory Border Patrol agent accused in a string of killings in and around the south Texas border town of Laredo might still be on the loose.

But despite her heroic actions, the woman could not save two other women who were killed hours after she reported the agent to state police, according to a police affidavit.

Juan David Ortiz, a 10-year veteran of US Customs and Border Protection, is being held on four counts or first-degree murder, among other charges. Authorities are calling him a serial killer.

He got to know the people he targeted, meeting with them several times to gain their trust, according to Webb County Sheriff's Department Chief Federico Garza.

"The evidence that we have right now is that he committed these murders in a similar fashion, taking these individuals out to desolate areas, near or right outside the city limits, and executing them with a hand gun," Alainiz said.

Ortiz picked up Pena around 9 p.m. Friday on San Bernardo Avenue, a prostitution hub, and drove her to his home in the northern part of the city.

Pena knew Ortiz as "David," and she said he "began to act weird" when she brought up her acquaintance, Melissa Ramirez, who had been killed the week before, an affidavit says. Pena became ill and went outside to vomit in Ortiz's front yard.

Later, the two left in his white Dodge pickup truck and stopped at a gas station off the Texas 20 Loop, about 10 minutes from his home, where they again discussed Ramirez, police say.

"David then pulled out a (black) pistol and pointed it at her. Erika tried to leave the vehicle. David grabbed her shirt to prevent her from exiting the vehicle. Erika began to scream for help," the affidavit says.

Pena wrested herself from his grasp by pulling off her top and running shirtless to State Trooper Francisco Hernandez, who was fueling up at the gas station. Ortiz drove away, according to police.

At a sheriff's substation, Pena described Ortiz, his tattoos and his truck before accompanying investigators to his home. A property search identified Ortiz as the owner, the affidavit says.

Police issued an alert for law enforcement to be on the lookout for Ortiz and his white truck just after midnight. About 1 a.m., state police found him at a gas station off San Bernardo Avenue and approached him. Ortiz fled, according to police.

They found him about an hour and a half later, hiding in the bed of a truck in the parking garage of a Ramada Inn, Alaniz said.

Here, the story becomes downright shocking, as police say Ortiz confessed not only to assaulting Pena and committing four murders -- but also to killing two of his victims after Pena escaped from his truck.

Ramirez, 29, was his first victim, police say. Ortiz told police he picked her up September 3 near San Bernardo Avenue and drove her out to the edge of the city, where she exited his vehicle to urinate on the side of the road, the affidavit says. Ortiz shot her multiple times in the back of the head and drove away, according to police.

On Thursday, Ortiz picked up another woman -- 42-year-old Claudine Ann Luera -- and drove her outside of Laredo. After she became suspicious and accused Ortiz of being the last person seen with Ramirez, Luera got out of the vehicle, the affidavit says.

Ortiz shot her multiple times in the head and fled, police allege. A truck driver later found Luera's body on the side of the road.

Not deterred by escape

After Pena escaped from Ortiz's truck Friday, the Border Patrol agent continued on his predatory path, returning to the San Bernardo Avenue area, where he picked up another woman early Saturday and drove her north on Interstate 35. Near the unincorporated town of Webb, he ordered the woman -- identified only as Jane Doe -- out of the car and shot her repeatedly in the head, the affidavit says.

Later Saturday morning, Ortiz again returned to San Bernardo Avenue and picked up a transgender woman and drove back up Interstate 35. About five miles from where he killed Jane Doe, Ortiz ordered the woman out of the vehicle and shot her once in the back of the head, the affidavit says.

Ortiz told investigators they would find the body behind gravel pits located off Interstate 35, according to the affidavit. Police also found a spent shell casing there, the affidavit says.

US Rep. Henry Cuellar, who represents Laredo, expressed concern to CNN affiliate KGNS that Ortiz used his supervisory role with the Border Patrol to stay apprised of developments in the murder probes. He also said he spoke to US Customs and Border Protection Commission Kevin McAleenan about improving vetting for agents.

"This person worked for the intel, the intelligence part of the Border Patrol, so he was getting all the leads that the local law enforcement were given," he said, adding that he was relieved Pena was able to escape and lead authorities to Ortiz. "Otherwise, she could have been killed, would have been victim number five, and heaven knows if there would have been more after number five."

His bail is set at more than $2.5 million, according to jail records and handwritten notes on warrants for Ortiz's arrest.

Provost said she was "sickened and saddened" by the alleged crimes.

"This was one rogue individual," Provost said.

Garza tried to assure the public that authorities feel they have the right suspect in custody.

"The killings will stop," he said.