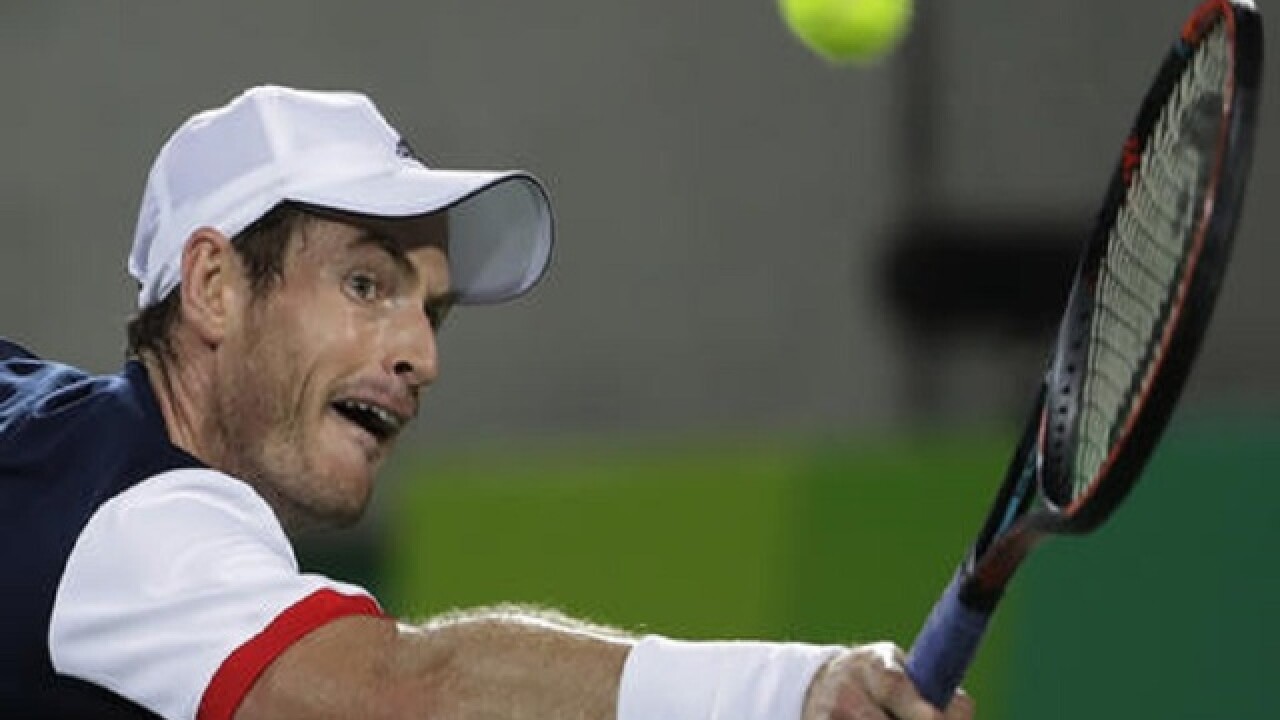 RIO DE JANEIRO (AP) — Andy Murray is making a habit of accomplishing things that hadn't been done in a while.
Or ever.
Murray became the first tennis player in Olympic history with two singles gold medals, winning his second in a row by wearing down Juan Martin del Potro of Argentina 7-5, 4-6, 6-2, 7-5 at the Rio de Janeiro Games in a final that lasted a tad more than 4 hours Sunday.
At the 2012 London Olympics, Murray won a singles gold and mixed doubles silver at the All England Club. That, of course, was also the site of his history-making Wimbledon championship in 2013, when he ended the hosts' 77-year wait for a British man to claim the trophy.
Murray won Wimbledon again last month, raising his Grand Slam title count to three.
The No. 2-seeded Murray took the final four games Sunday after trailing 5-3 in the fourth set and stopped the resurgent run of the 141st-ranked del Potro, who knocked off No. 1 Novak Djokovic in the first round last weekend and No. 3 Rafael Nadal in the semifinals Saturday. No man ever has defeated the top three seeds on the way to a gold, but 2009 U.S. champion del Potro sure came close before winding up with a silver to go alongside his bronze from 2012.
Del Potro had the louder support, and one fan even yelled something as Murray was about to hit a shot while two points from victory. He put the ball in the net and glared in the direction the voice came from. Soon after, a fan wearing a shirt with Argentina's colors was escorted out.
Nadal, the 2008 gold medalist, lost 6-2, 6-7 (1), 6-3 earlier Sunday to Kei Nishikori, whose bronze is Japan's first Olympic tennis medal since 1920.
The final provided quite a contrast in styles: Murray's terrific returns, impenetrable defense and track-down-every-ball court coverage against the 6-foot-6 del Potro's booming serves and furious forehands. Both men are excellent at doing what they do, and it led to prolonged points. Not all were pretty, though, as they combined for 102 unforced errors, and 85 winners.
They almost went to a fifth set, too, because del Potro served for the fourth at 5-4, but was broken there and again in the final game.
When he dumped a backhand into the net to end the match, Murray bowed his head and slumped his shoulders as he walked to the net, looking more relieved than thrilled. Del Potro trudged even more slowly forward, then pulled Murray in for a hug.
They were each on court for the fourth straight day, because rain washed out play Wednesday, leading organizers to eliminate the 24 hours of rest between the semifinals and final. Del Potro was the one who looked the worse for wear from the accumulated exertion.
He would have been the lowest-ranked man to be an Olympic tennis gold medalist and this would have been his first title at any tournament since January 2014. A couple of months later, he had the first of three operations on his left wrist that forced him to miss 2½ years' worth of Grand Slam tournaments. His first major tournament back was in June at Wimbledon and he still is not completely able to rip two-handed backhands the way he used to, often relying on righty slices.
By the 10th point of Sunday's match, a 26-stroke exchange that ended with Murray netting a forehand, del Potro already looked spent. He closed his eyes, rolled back his head, stuck out his tongue and sucked air. By the fourth game, del Potro was resting between points near the baseline, leaning forward with his elbows on his knees, catching his breath. By the fourth set, he was leaning on his racket as if it were a cane.
Early on, del Potro ended a mesmerizing, 34-stroke point by pounding a forehand winner, then slowly strolled, chest heaving, and waved his racket to ask the fans for more noise, perhaps hoping to delay things a bit. His supporters responded dutifully, raising a ruckus with their song of "Ole, ole, ole, ole! Del-po! Del-po!"
At other times, they bounced in place and shouted in Spanish, "Whoever isn't jumping is English!" (Murray is Scottish, but you get the point.)
Murray's backers would reply with the slightly more mundane, "Let's go, Andy! Let's go!"
Both sides prompted repeated requests for silence from chair umpire Pascal Maria, who also warned del Potro for taking too much time between points.
Murray used drop shots often and, usually, effectively, adding to the strain on del Potro's body. At the start of the second set, he feathered one that bounced twice before del Potro could get to it. Del Potro caught the ball, then stepped to the net, rested his elbows on the white tape and put his head on his balled-up fists.
Still, a couple of points later, del Potro summoned the strength for a backhand passing winner that gave him a break for 1-0. In the very next game, Murray failed to convert three break points, and that was basically his last chance in that set.
But he turned things back around on his way to making history yet again.
Copyright 2016 The Associated Press. All rights reserved. This material may not be published, broadcast, rewritten or redistributed.